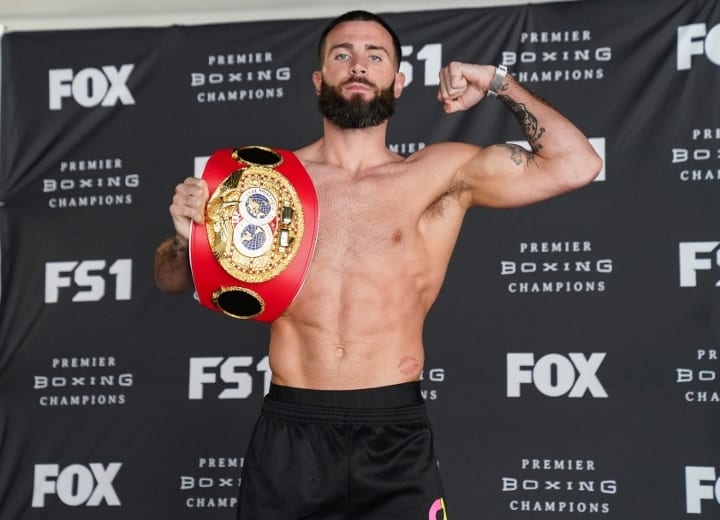 It’s arguably the biggest medical discussion topic in American, if not worldwide, culture going on today- should you or should you not take the Covid 19 vaccine? And, no matter the at times overwhelming political debate about the decision or the concerns about the after-effects, etc.,  current IBF Super Middleweight World Champ, Caleb Plant, made it clear this weekend that he is vaccinated. And, the reason is to protect his chance to meet Unified 168 lb. champ, Canelo Alvarez, in November.

Plant talked to a group of reporters prior to the Yordenis Ugas upset of Manny Pacquiao in Las Vegas Saturday night, and Keith Idec of Boxingscene.com was there to get him interesting thoughts on vaccination,

Caleb Plant: I'm Vaccinated Because I Don't Want This Moment Against Canelo To Slip By https://t.co/J7bNhu0v19 pic.twitter.com/2SXUI9SVLS

“I don’t know specifically, you know, what he had to sign up for,” Plant said. “You know, no one’s, you know, put a guy to my head and said, ‘You have to sign this for the vaccination,’ or anything like that. But, you know, to be honest, not for any political reason, but I haven’t been a big fan of the vaccination. But I’m not opposed to people getting the vaccination. You know, but I feel like if you’re healthy and you’re young and you’re strong, like I am, you know, the long-term effects, I’m not exactly sure what they are.

“But I feel like if I got COVID, I could get through it just fine. But I did get the vaccination and I’m vaccinated because I don’t want this moment to slip by. And I’ve already sacrificed so much for the sport. Like I talked about, I’m not gonna let something like COVID get in the way of stopping me from obtaining my destiny.”

Plant makes another interesting point that while he is admitting that he has taken the vaccine, there is no word as to whether Canelo has? And, as we learned previously, a negotiation “sticking point” previously with Canelo, his management and Premier Boxing Champions, has been the scenario that if Plant cannot fight for injury or illness vs. if Canelo cannot fight for either reason.

That is to say, that apparently, even if Plant cannot fight, Canelo will still make his money and have strong input on a quick replacement fighter for the PPV. Meanwhile, if Canelo cannot fight on November 6th for whatever reason, the fight is delayed until he is ready/can defend. There hasn’t been confirmation on whether that scenario agreement is still in place.

Compounding matters is the rising number of hospitalizations and deaths among younger, unvaccinated adults in the U.S. And, health officials have repeatedly pleaded with those that are able (without a serious medical concern) to get the vaccine, should. Yet, tens of millions of Americans have not gotten fully vaccinated, yet.

Back to the unbeaten Plant though, he reportedly stands to make $10 million or so for the Alvarez challenge. So, that kind of career-changing money is a big motivator.

And, the recent examples of fighters like Teofimo Lopez, Tyson Fury, and England’s Conor Benn testing positive, while not vaccinated and it canceling their main event fights, has to be an even bigger incentive for Plant and many others to go ahead and eliminate that risk.

Now, we’ll wait for more on whether Alvarez has taken his shots or intends to risk not doing so.