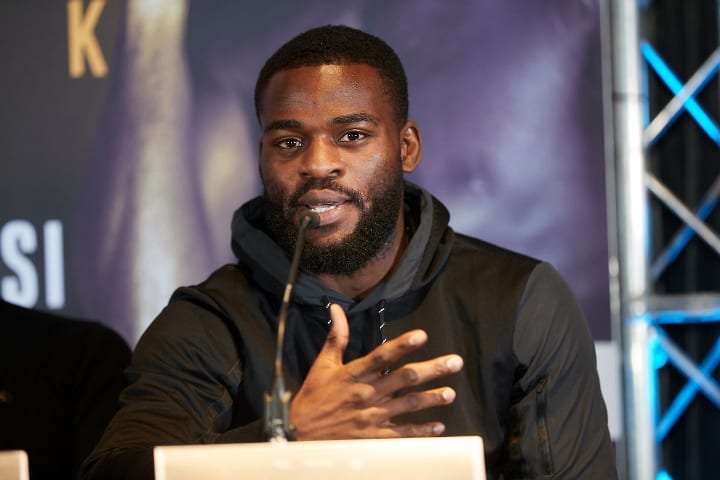 Buatsi plans to be impressive against Calic

Rising Light-Heavyweight star Joshua Buatsi will return to the ring on Sunday, October 4. He defends his WBA International Title against undefeated Croatian Marko Calic, live on Sky Sports and DAZN.

The 2016 Olympic bronze medallist Buatsi (12-0, 10 KOs) has firmly established himself as one of the most exciting talents in boxing. Having scored a series of eye-catching stoppage wins since turning pro in 2017, many in the sport touting him as a future World Champion.

The 27-year-old from Croydon hasn’t fought since he knocked out Canada’s Ryan Ford in seven rounds at The O2 in August last year. He will be aiming to relieve his itchy knuckles before targeting some of the more prominent names in the red hot 175lbs division, including former World Title challenger Callum Johnson.

After over a year out of the ring @boxingbuatsi resumes his explosive 🧨 career against Marko Calic on Oct 4, live on Sky Sports

Calic (11-0, 6 KOs) enjoyed a successful spell in the amateur code, beating his fellow countryman Alen Babic twice and highly rated Welshman Kody Davies, before joining the professional ranks in September 2016, where he is undefeated in eleven fights.

“I’m excited to have a fight date confirmed,” said Buatsi. “I haven’t boxed in over a year, so this has been a long time coming. I’m looking forward to going through the whole process of arriving at the venue, warming up, walking out, and performing under those bright lights again.

“It has been very difficult adjusting my training while waiting for a fight date. It’s the first time it has happened to me as a professional to this extent, so it’s been an exciting period, but you have to get on with it.

“Marko Calic is a solid opponent who will be coming to win. He’s very experienced in the amateur scene and was around on the circuit years before me. As always, I’m planning on impressing with my performance. Winning is everything. I want to get two fights in this year, starting with a win against Calic.”

Jermell Charlo says losing “gave me jet fuel”
Lomachemko-Lopez 2 not on paper yet
Advertisement
To Top
We use cookies to ensure that we give you the best experience on our website. If you continue to use this site we will assume that you are happy with it.OkPrivacy policy