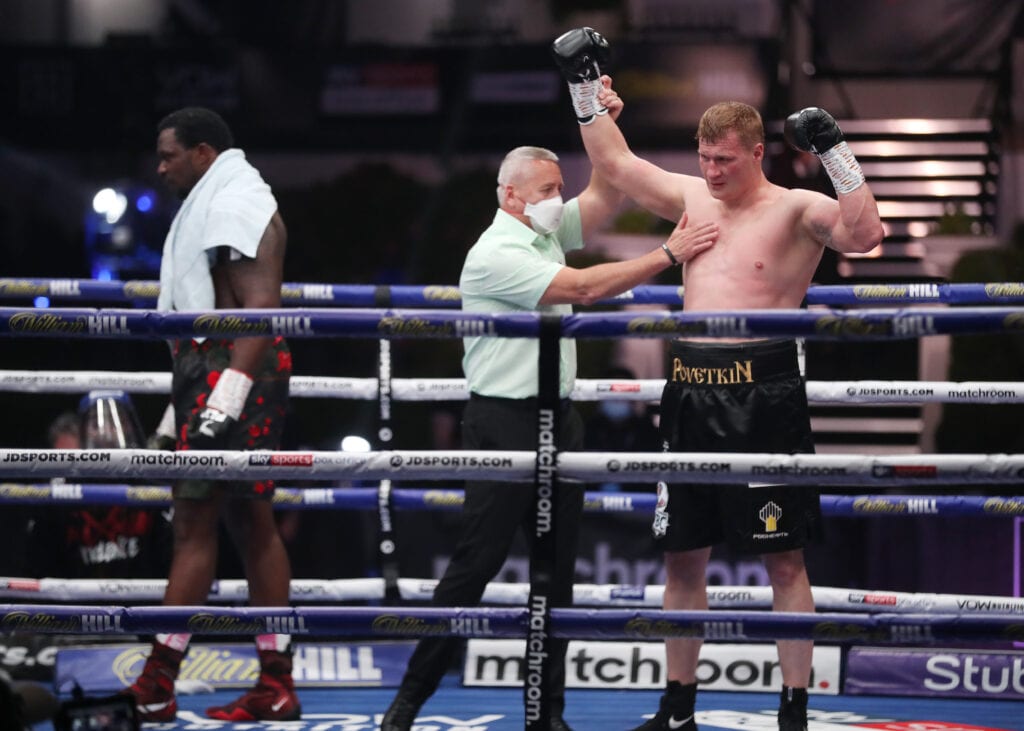 As expected, Matchroom Boxing is proceeding with more fight card announcements, including the Dillian Whyte-Alexander Povetkin rematch, but the fights that they didn’t announce Tuesday are also conspicuous by their absence.

First, Matchroom tweeted mid-day London time the official fight cards for four weekends starting in October with the Heavyweight contender battle being the most prominent:

As we wrote on Monday night, the stunning, one-punch, bomb KO of Whyte has Matchroom promoter Eddie Hearn scrambling to have him get back in the ring with the Russian Povetkin, and try to regain standing in Heavyweight contention.

The former WBA Heavyweight Champ, Povetkin got off the canvas twice in the fourth round to level Whyte with a single left uppercut, less than :30 into round five. The referee didn’t bother to count, as Whyte laid motionless for several seconds.

The stunning reversal has ruined the short term plans of Hearn and Whyte to try to set up a WBC mandatory fight with new champ, Tyson Fury. Fury is still slated to fight for the third time, former champ, Deontay Wilder in December.

The fight will be officially be November 21st and it’s believed that it will be at London’s O2 Arena with at least some fans present. There had been some talk from Povetkin’s side that the rematch would have appeal in his home, Russia, but Hearn stands to make much more in the U.K. on live gate, etc.

What was more noteworthy about the Matchroom announcement is there is still nothing, yet, on the proposed WBC #1 Lightweight contender battle between England’s Luke Campbell and California unbeaten Ryan Garcia. Hearn won the promo rights, but as Oscar De La Hoya of Golden Boy Promotions has already been experiencing, getting Garcia to agree to the money, etc. has been a problem over the last year.

For his part, Campbell had tweeted last week that last Friday would be the day that we would hear the details on when and where for the Garcia fight. That has obviously come and gone.

Also, Hearn/Matchroom has yet to confirm the Heavyweight showdown between unbeaten former World Cruiserweight Champ, Oleksandr Usyk and popular English journeyman KO artist, Dereck Chisora. Although, that fight is still expected to be in late October or early November.

The most prominent fight of the other four Matchroom promoted cards did announce Tuesday, is the Covid 19 delayed World Boxing Super Series, Crusierweight Final between Martin Briedis and Yuniel Dorticos.

That bout originally scheduled for March is back for September 26th and will be in an empty TV studio in Munich, Germany.

Briedis (26-1, 19 KOs) was entering the final back in March under a cloud of controversy, as the former WBO champion was stripped of his title coming into the bout with Dorticos. This was because of not taking an immediate rematch against Krzysztof Głowacki for their controversial ending in the WBSS semi-final last June.

In that bout, referee Robert Byrd didn’t hear the bell at the end of the second round when Briedis landed a huge punch, which led to another knockdown well, and we mean WELL after the round was supposed to be over. He ruled a KO for Briedis, but the rematch was ordered.

Dorticos (24-1, 22 KOs) was coming into this Cruiserweight final for the second time after coming up short in the previous tournament in 2018, dramatically losing to Murat Gassiev back in 2018 in Russia. His fight with Gassiev at the time was a 50-50 fight and played out as such.

Report- Whyte-Povetkin Rematch Set For November 21st
Jermall Charlo-‘Where are the rest of the belts at?’
Advertisement
To Top