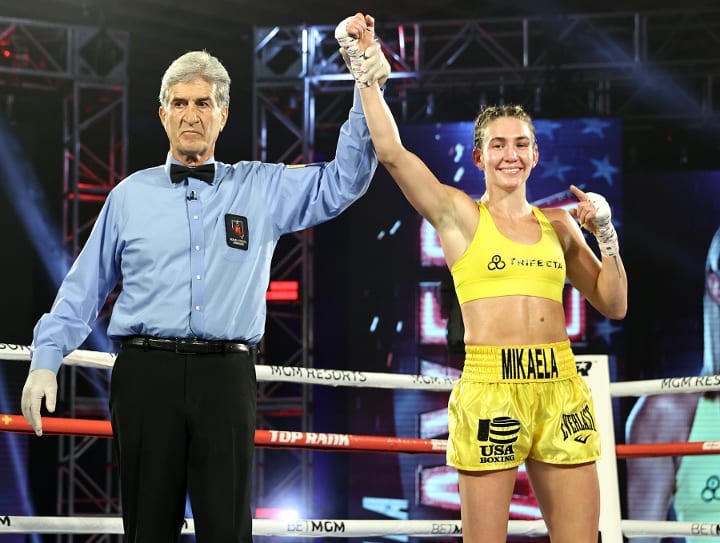 Inoue-Moloney and Brodnicka-Mayer will headline an evening of boxing live and exclusively on ESPN+ beginning at 7:30 p.m. ET/4:30 p.m. PT.

“After Mikaela’s last performance, I promised her a world title fight. She’s asked to fight the champions, and I am confident she will make a statement to the rest of the women in and around her weight class,” said Top Rank chairman Bob Arum. “We’ve watched her progress since her pro debut, and she has turned into one of the premier fighters in female boxing. This WBO belt will be the first of many world titles for Mikaela.”

Frank Smith, CEO of Matchroom Boxing, Brodnicka’s co-promoter, said: “We’re happy to be working with our friends at Top Rank on another great fight. Ewa Brodnicka has proved herself to be one of the best 130-pound fighters on the planet with five defenses of her WBO world title, and I’m backing her to make it six successful defenses when she meets the undefeated Mikaela Mayer on Oct. 31. This is a top matchup at a time when women’s boxing grows from strength to strength.”

JUST ANNOUNCED ? Last month, @MikaelaMayer1 began speaking it into existence, and now it's here:#BrodnickaMayer for the WBO Junior Lightweight strap will be your #InoueMoloney co-main event, Saturday, Oct. 31, on ESPN+ pic.twitter.com/af0vgDRNJp

Brodnicka (19-0, 2 KOs), from Poland, has fought all of her pro bouts in her home country and has gone the 10-round distance on 10 occasions. She participated in the final world title bout before the COVID-19 pandemic March 7, winning a unanimous decision over Djemilla Gontaruk in Dzierżoniów, Poland. Before capturing world title honors at junior lightweight, Brodnicka reigned as European lightweight champion.

Brodnicka said, “I am excited that my title defense against Mikaela is happening in America, where I’ve always wanted to fight. I am more than ready for this opportunity, and I would like to thank my promoters, Eddie Hearn and Mariusz Grabowski, for helping make this fight a reality.”

Mayer (13-0, 5 KOs), from Los Angeles, turned pro under the Top Rank banner almost one year after representing the United States at the 2016 Rio Olympics. She made her pandemic return July 14 and bested two-time world title challenger Helen Joseph over 10 rounds. Matchroom Boxing announced it had signed Brodnicka to a promotional contract on Aug. 6, but later that day, the WBO ordered Brodnicka to defend her world title against Mayer.

“I’ve made huge improvements to my boxing skills over the last 10 months. You saw some of it in my last fight against Helen Joseph, but I’ve reached a whole new level this fight camp,” Mayer said. “I’m more than prepared for this WBO world championship fight, and I will absolutely be going home with the belt. This fight will not go the distance. Ewa Brodnicka is not on my level, and her time is up. Tune in and watch me bring the championship belt to ESPN and Top Rank