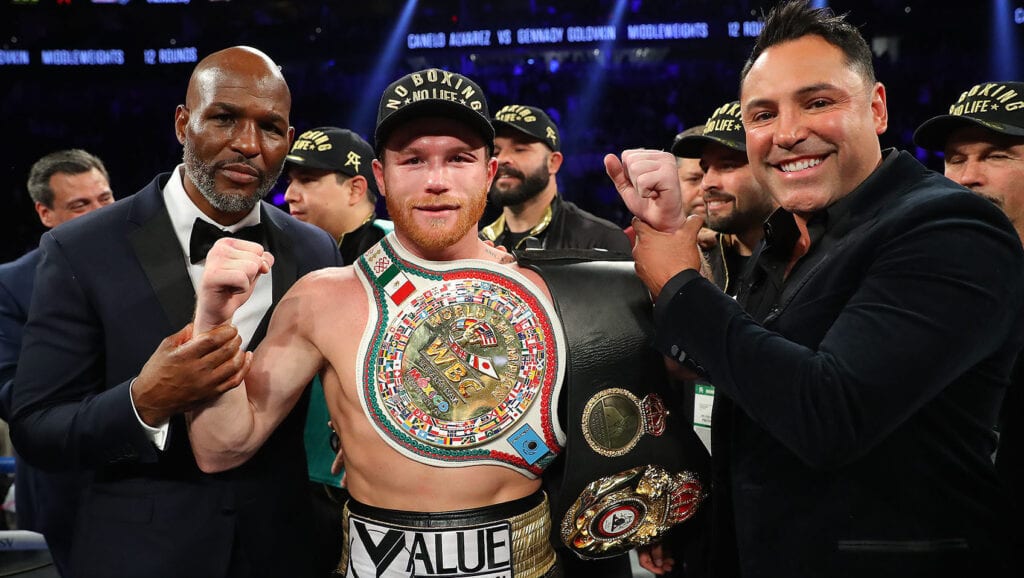 As expected @Canelo has re-filed his suit against @GoldenBoyBoxing, @OscarDeLaHoya and @DAZN_USA.

As we wrote last week, there was a mediation session that reportedly lasted some 10 hours trying to get Alvarez, Golden Boy and DAZN to settle their differences out of court. According to The Athletic, Alvarez was reportedly offered an amended new contract, guaranteeing him significantly less than the $35 million per fight on his original DAZN deal. However, the offer included an incentive for DAZN subscribers added, in exchange for him being willing to get back in the ring before the end of this year.

According to the Athletic, the mediator was given both Alvarez’s contract with Golden Boy, as well as the promotion’s deal with DAZN, and in the Athletic’s terminology- the two offers “do not mesh,” when it comes to who gets to dictate what opponents Alavarez fights.

The Athletic went on to say that Alvarez was given an offer last Tuesday of $20 million per fight moving forward on a deal that still has eight fights remaining.

It has been widely reported the DAZN has been seeking for Canelo to take a significant pay cut not only due to the Covid 19 pandemic this year what DAZN’s inability to maintain subscribers / revenue with its U.S. streaming service.

Angered by being prevented from fighters that he wanted to fight this fall, Alvarez filed his lawsuit two weeks ago in California Federal Court. However, the judge assigned to the case quickly dismissed it for improper filing of defendants.  But, the contingency he gave Alvarez and his lawyers was they had until Monday to refile an amended version of it.

And, in a sign that the mediation didn’t work, that’s what they’ve done.

The suit made clear that DAZN was trying to force Alvarez to fight former Undisputed Middleweight champion, Gennady Golovkin, for a third time. But, Alvarez continues to maintain, now in the legal filing, that he has every right to rebuff that third fight. That part of the suit read partially,

Alvarez, Golden Boy and DAZN have been in a “standoff,” as to who his next fight would be against. This had included the possibility of Canelo fighting another British Super middleweight and WBA champ, Callum Smith. But, that fight has yet to materialize.

Canelo has not been in the ring since he competed for the first time at the Light Heavyweight, beating WBO champ Sergey Kovalev by 11th round TKO last November. That’s his only fight in the last 17 months with the now continued squabbling under the Golden Boy/DAZN deal.

Canelo reportedly wants to fight Turkish Super Middleweight contender, Avni Yildirim, later this fall, but that was apparently rejected by DAZN. So, now, he took the blockbuster legal move to try to end his deal with Golden Boy and DAZN.

Most importantly, we continue to wait to see, if any part of this means that Alvarez will be back in the ring before the end of year or not?

Brodnicka-Mayer title bout on Inoue-Moloney card
Buatsi – ‘It’s my job to go in there and to come out on top’
Advertisement
To Top
We use cookies to ensure that we give you the best experience on our website. If you continue to use this site we will assume that you are happy with it.OkPrivacy policy