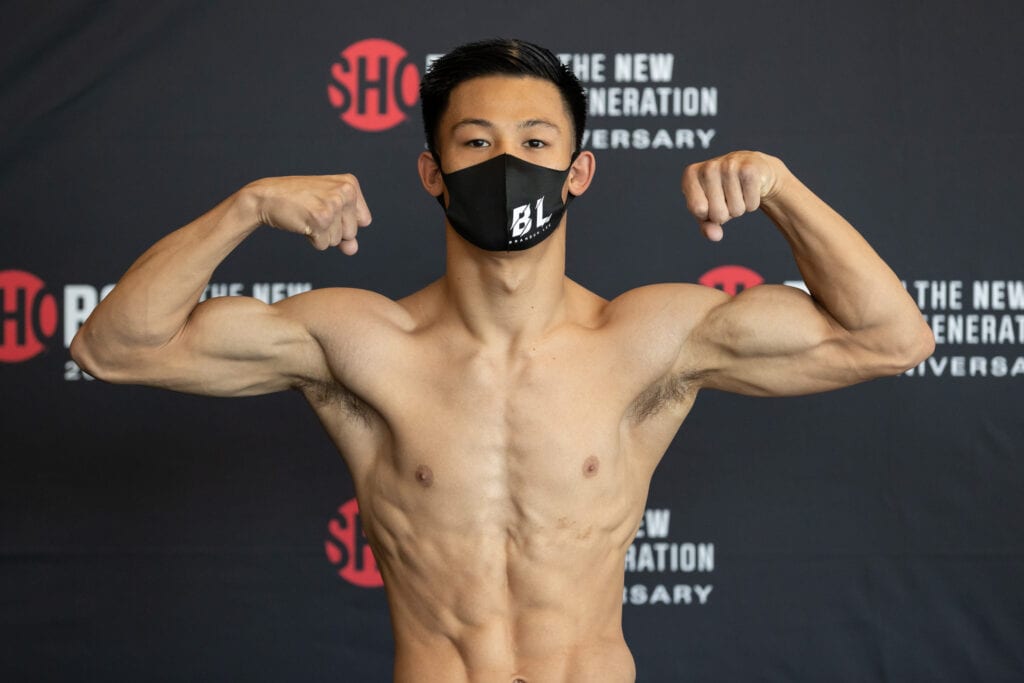 Rising, unbeaten Jr. Welterweight Brandun Lee is comfortable and confident as he prepares Wednesday night to headline the latest “ShoBox” up and coming prospect series. And, he wants to make clear that he’s very comfortable at 140 lb.

First, Lee, 21-0, 19 KOs, will face arguably his toughest test as a pro against veteran Philly contender Samuel Teah, 17-3-1, 7 KOs. And, the native Californian stepped on the Mohegan Sun Casino in Connecticut at 139 3/4 to make things official,

Lee has a 13 fight knockout streak and is looking to work his way into 2022 title contention. And he also joined us on the “Big Fight Weekend” podcast to discuss stepping up from Lightweight and why his training camp has gone well?

Lee joked with us that he specifically enjoys the pizzeria inside the Mohegan Sun Resort Complex and was looking forward to having a slice or two in victory over Teah. And, he had said that he “would comfortably make” the 140 lb. limit, which is turned out to be correct.

On Tuesday afternoon in his final comments to the media, Lee made clear that his sparring has him ready,

“I know Teah is a veteran and has beaten some decent prospects. I’m looking forward to bringing the best out of him.

“I think Teah is going to be a pressure fighter. For sparring, I had an Argentinian and a few Uzbekistan and Kazakhstan fighters that put on good pressure. I got great work.

Lee continued, “as far as my conditioning goes, I’m sparring for 13 rounds straight. I’m conditioned if I need to turn it on…Teah’s never been stopped before. I’m here to give the people what they want. People want to see knockouts so that’s what I’m here to do.”

Lee headlined for the ShoBox series in the same setting back in December. That’s when he stopped Dakota Linger in just the third round.

The four fight Showtime card starts on the premium network at 9 p.m. Eastern.