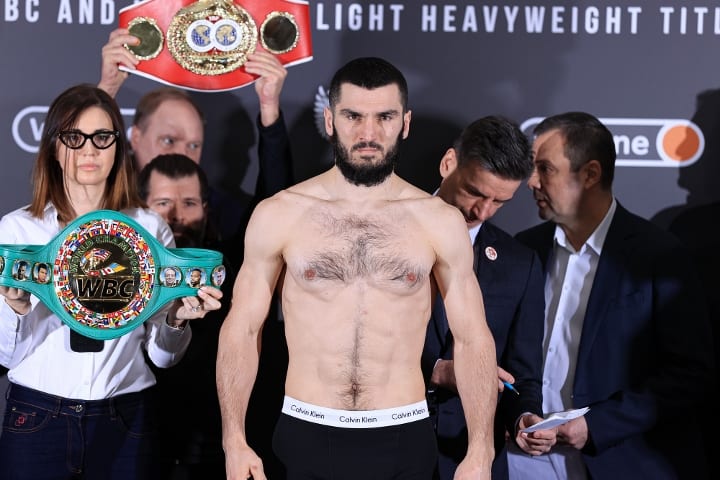 It seemingly took longer to make the fight happen than it would to be in the ring, but WBC and IBF Light Heavyweight champion Artur Beterbiev made easy work of Adam Deines, stopping him in ten rounds to retain his titles from Moscow.

The contest that aired on ESPN and ESPN+ going into it was a mismatch on paper, and once the bell rang, the heavily favored Beterbiev showed why.

17 months away from the ring … safe to say @ABeterbiev’s hands were itching ?

The start of the second round saw some heavy right hands landing on Denies and it was at this point of the fight, it was only a matter of when this would be over and not if for the underdog Denies. Despite that, Denies in the second round stayed upright but was consistently being walked down and hemmed up against ropes. The third round saw Beterbiev land some shots but was a less active round between the two.

The fourth round picked up by Beterbiev as he turned on the action and was landing almost at will and the crowd on hand was sensing that the champ was about to close out the fight. The fourth was a round that saw Denies get outworked and was getting hit with inside shots that were splitting his guard.

The fifth round was more of the same as Betrebiev was still landing shots as Denies was hemmed along the ropes. The sixth round saw Beterbiev catch Denies with a left hook with a minute to go in the round which had at this point countering less and having less resistance. It would be in the tenth round where Beterbiev closed this one out with a big left hook that sends him down. After that, Denies corner threw in the towel and this one was over.

Beterbiev now likely awaits the winner of the Joe  Smith Jr.-Maxim Vlasov matchup in April for the unification bout at light heavyweight. That fight is for the vacant WBO title left behind by Canelo Alvarez after he beat Sergey Kovalev. It will be interesting to see the potential winner down the road of that fight try for undisputed at some point at 175 against Dimitri Bivol, who holds the WBA portion.

Until then, this was as many expected a stay busy for Beterbiev to knock off the rust in the ring since 2019.