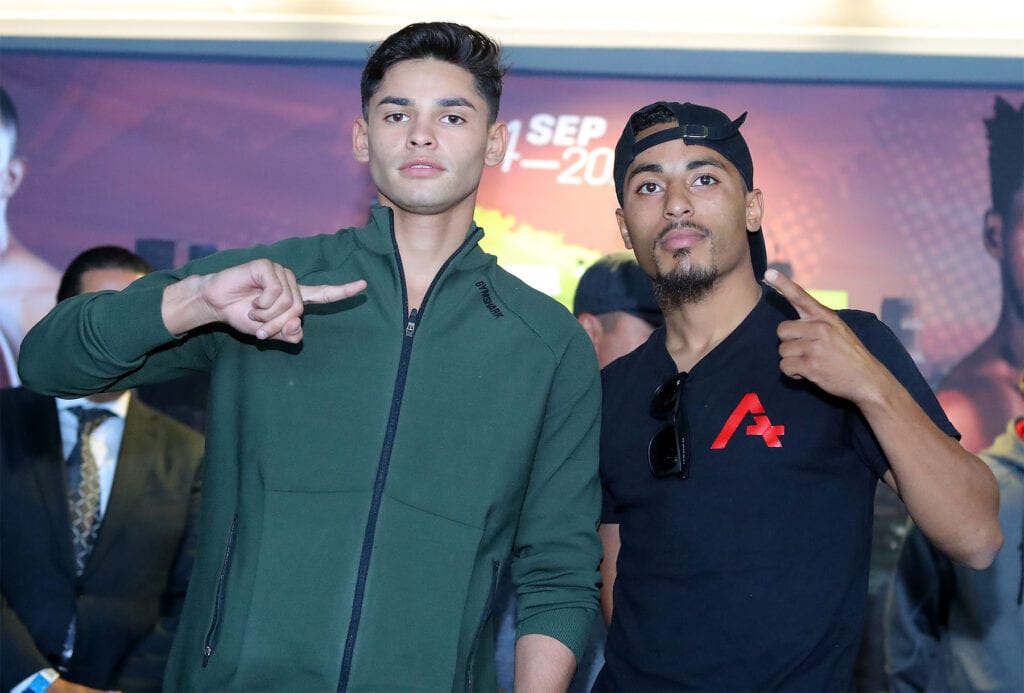 In what was the bizarre scene on Friday, news broke that 25 year old lightweight contender Avery Sparrow was arrested before he was to weigh-in the event Friday in Los Angeles.

Mike Coppinger of The Athletic first broke the arrest, shortly after Sparrow was not present to face off against opponent Ryan Garcia, who made weight for what was to be their contest Saturday Night at the Dignity Health Sports Complex (which I Still call the StubHub Center) in Carson, California.

Garcia (18-0, 15 KOs) and Sparrow were to have been the co-main event to WBO 154 lb. Champ Jamie Mungia taking on Patrick Allotey Saturday night on the streaming service, DAZN.

Sources: Avery Sparrow was arrested and as a result his fight with Ryan Garcia is off. This isn’t a new crime he’s accused of. U.S. Marshalls we’re searching for Sparrow this week in Los Angeles

In the report from Coppinger, this wasn’t a new crime Sparrow (10-1, 3 KOs) is accused of and that U.S. Marshals we’re searching for Sparrow this week in Los Angeles. So much so, that they were as far back as Wednesday, combing through gyms in Los Angeles to capture Sparrow.

At the weigh-in Friday, it was a strange case as everyone got on to the scales and it seems didn’t know about the arrest either. Garcia was the last to go onto to scale and make weight at 135 pounds on the button, and you can hear audibly to those in attendance asking about the whereabouts of Sparrow:

Garcia, after stepping off the scale and addressed the crowd asking, “Where is he (Sparrow) at? You know he talked a lot, and I don’t see him here. He told me he makes 126 easily. I don’t know where he’s at. I just wanted this fight, so somebody ring him up. Let’s fight!”

As of late Friday afternoon, there had yet to be an update from law enforcement, as to the charges that led the U.S. Marshal service to become involved in trying to arrest Sparrow.

Michelle Rosado, aka “Raging Babe” who helps promote Sparrow, addressed it on social media by stating: “you will know everything soon,” and she intends to relay through The Athletic writer/insider Lance Pugmire.

At that time, we all will hope to have more the details.

We’re talking to @pugboxing. You will know everything soon. Obviously, we are sick about this & we tried everything. Insane how this all happened today. thought I’ve seen a lot but today took the cake. It is what it is. Thanks guys for all the texts/tweets – good and nasty

UPDATE: There are more details emerging on Sparrow’s arrest and situation. Damon Gonzalez of his own, “LatinBoxSport” site, posted on Instagram:

Ryan Garcia Fight On DAZN is OFF Ryan Garcia showed up at the official weights today to learn his opponent Avery Sparrow was arrested last night and is being held by the authorities LASD-Carson Station Patrol in California held with out bond for a Felony charge. Photo credits: @hoganphotos

Further, there is rampant internet speculation that DAZN, and Golden Boy Promotions, Saturday night’s promoter, knew of the pending felony charge against Sparrow. And yet, they were proceeding with him in the co-main event Saturday.

This would also explain why the U.S. Marshals may have been requested to find Sparrow and take him into custody, when he traveled to California for fight week this week.

So with this wild news and less than 24 hours before fight night, Garcia has no replacement fight scheduled for tomorrow and more than likely he’ll be back in action on the newly announced Canelo Alvarez-Sergey Kovalev matchup taking place on November 2nd that was made official today.

See below today’s confusion press conference, and despite Garcia’s opponent not present, everyone else was.

Canelo confirmed Friday he will meet Kovalev November 2nd
Sparrow arrest stems from April Gun Incident
Advertisement
To Top
We use cookies to ensure that we give you the best experience on our website. If you continue to use this site we will assume that you are happy with it.Ok