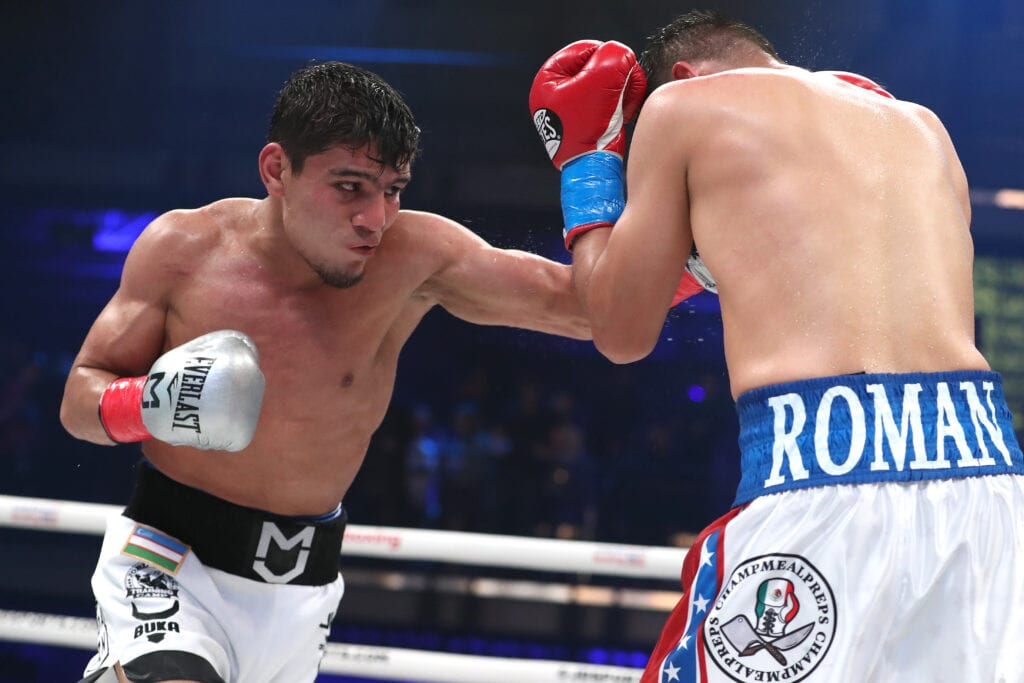 It was an historic night in Miami on the undercard for Demetrius Andrade and Luke Keeler, as Murodjon Akhmadaliev matched boxing history with an upset decision win.

Roman vs. Akhmadaliev round 8 action! 🔥

Akhmadaliev was the aggressor and scored more of the cleaner shots, especially in the middle to late rounds to capture the verdict on two of the three cards.

The Ubekistanian Olympic Bronze medalist in 2016 was battling for Unified World title in just his eigth professional fight. He had won six of his seven victories by knockout headed into this one. However, Roman was clearly the best fighter Akhmadaliev had fought to date.

Roman actually out landed Akhmadaliev with power punches 131 to 114, but Akhmadaliev appeared to win several of the close rounds between the 7th and the 12th by being more aggressive and scoring bigger shots on occasion. Two judges gave Akhmadaliev the fight 115-113 and the third had Roman wining by the same exact score.

Akhmadaliev joined Leon Spinks Thursday night, as the fastest fighters to ever win a Unified (two belts or more) version of a division title. This, after Spinks upset Muhammad Ali by 15-round decision in Spinks’  8th pro fight in February of 1978.

This fight was originally scheduled for September, but the champion Roman suffered an injured shoulder postponing until the start of 2020.

Roman was making the fifth defense of his Jr. Featherweight title and now, will obviously look to a possible rematch. Meanwhile, Akhmadaliev has that rematch option, but  also the possibility of fighting exciting WBO 122 lb. champion, Emanuel Navarrete.

The Mexican Navarrete has successfully defended his title five times (all by KO) in less than a year going back to last May and is slated to fight again next month on the undercard of the Deontay Wilder – Tyson Fury Heavyweight Title showdown in Las Vegas.

Three Boxing Things I’m looking forward to 1/30-2/1
Francis Chua re-signs with Dragon Fire
Advertisement
To Top
We use cookies to ensure that we give you the best experience on our website. If you continue to use this site we will assume that you are happy with it.Ok