Tyson destroys Holmes on this day in 1988

On January 21, 1988, at the Convention Center in Atlantic City, New Jersey, Mike Tyson made an undisputed title defense against former titleholder, Larry Holmes.

Holmes coming into this fight was off of back to back decision losses to Michael Spinks and hadn’t stepped into the ring in over 21 months. Homes, who was thirty-eight when the bell rang, was up against Tyson, who was twenty-one at the time and coming off a seventh-round beating of Olympian Tyrell Biggs.

Holmes would be once the bell rang become another victim of Tyson-Mania.

Tyson was younger, quicker, and faster than Holmes as expected, and like many others who challenged Tyson in this era, tried to keep Tyson at bay by establishing the jab and hold whenever Tyson would aggressively come in. This tactic was somewhat effective until the fourth round. In the fourth, Holmes was Tyson sent down with a hard right for the first knockdown.

Holmes got up and was immediately knocked back down with another right, shortly after.  Holmes got up again, but as the round came to a close, Tyson ended this contest with a right hand, which sent Holmes down hard, forcing referee Joe Cortez to call this one over. 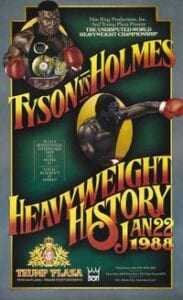 “I just felt I didn’t have to bother counting,” Cortez said afterward about the knockdown of Holmes. “I pulled out his mouthpiece and got out the way so the doctor could look him over. Larry was all right. He rose to a sitting position and told everybody, “I’m O.K.” O.K., in this case, was relative.

There is an excellent shot of the HBO broadcast of the fight that shows Cortez, waving the match off and Holmes to be quickly attended to by ringside doctors. The camera stayed on a down Holmes, showing him yelling that he was fine.

Tyson is a lot better than I thought, a lot better. People can talk about Spinks all they want… Tyson is the true champion,” Holmes said after the fight.

That same Spinks that handed Holmes back to back defeats was taken out by Tyson in ninety-one seconds in June of 1988.

Tyson would continue to this warpath of the heavyweight division until his upset by Buster Douglas in 1990 in Tokyo. Holmes, after this bout, took off another two years and would come back in the early 90s as a mainstay of the “Tuesday Night Fights” series on the USA Network before retiring in 2002 for good. Both of course for there efforts in the ring are in the International and World Boxing Hall of Fame.

But on this day in 1988, it was a passing of the torch as Tyson was dominant against Holmes. Watch it here:

Joe Louis stops Buddy Baer in 20th defense
40 years ago Salvador Sanchez outgunned “Little Red”
Advertisement
To Top
We use cookies to ensure that we give you the best experience on our website. If you continue to use this site we will assume that you are happy with it.OkPrivacy policy