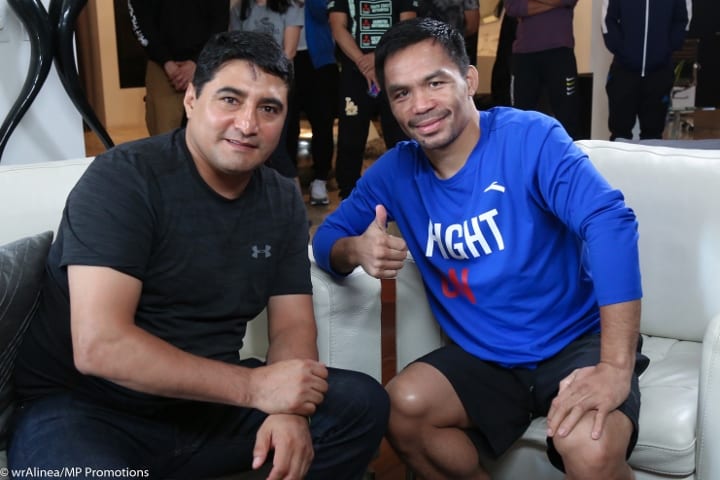 Morales-Pacquiao I took place 15 years ago

On March 19, 2005, at the MGM Grand Resort & Casino in Las Vegas, Nevada, two of the best in the world at featherweight steeped into the ring as Erik Morales and Manny Pacquiao squared off for the vacant WBC International and IBA titles and didn’t disappoint.

The build-up for this fight, which aired on HBO pay-per-view, had Morales coming in entering the contest ranked No. 2 at 130 pounds by The Ring, and Pacquiao was recognized as World Featherweight Champion by the publication.

One of the many backstories that were an issue in the testing that they made Pacquiao take. Two days before the fight, the Nevada State Athletic Commission forced Pacquiao to take a blood test and an eye examination. The commission stated that Pacquiao had failed to submit to a mandatory medical examination within the prescribed 30-day period before the fight. 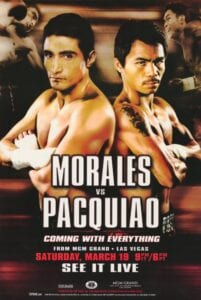 (Fight Poster for Morales-Pacquiao I)

At the time trainer of Pacquiao, Freddie Roach said he had been examined at a California clinic on March 4, and the test results had been lost. Murad Muhammad had former FBI agent Warren Flagg call the doctor at the clinic and ask him to fax the test results to the commission. Flagg reported back to Muhammad that the examination had not been done within 30 days of the Fight; It had been done in January.

Muhammad was then accused of having the test results stolen. The testing of Pacquiao before fights was one of the sticking points down the line when Pacquiao would go on to take on Floyd Mayweather, which would lead to delays until their bout in 2015.

Hear more about Manny Pacquiao’s possible next fight and is it maybe, with UFC star Connor McGregor on our Big Fight Weekend podcast by clicking below:

For Morales, he was coming off the fight of the Year winner in 2004 as he fought to a very controversial decision against Marco Antonio Barrera in the third fight of their trilogy fight. Many watching the fight felt that Morales might have won the Fight against Barrera in losing the WBC World Super Featherweight title.  This bout for Morales was a rebound fight and in which he was a significant underdog to Pacquiao.

Once the bell rang, this one was wire to wire in terms of action with both swinging throughout. One of two turning points in this fight was in the fifth round was a headbutt between the two caused a bad cut on Pacquiao. That cut was deep and over his right eye, which would be a problem for him from that point of the fight.

Another factor in the Fight was Morales’s ability to box at a distance and box southpaw. Morales switching southpaw in the fight was to keep Pacquiao from landing his noted big left hand as the broadcast made a note of. Despite this, both fighters were exchanging throughout to a raucous sellout crowd of 14,623.

This fight went the distance, and in the end, the judges favored Morales by the slimmest of margins as all three judges saw it 115-113 in favor of Morales for the win.

After this bout, Morales moved up to lightweight before calling Pacquiao again two more times in 2006. In both of those matches, Morales was on the losing end by knockout but on this day in 2005, the future Hall of Famer Morales was victorious.

Julio César Chávez stops Meldrick Taylor 30 years ago
Ali took on Norton for the first time
Advertisement
To Top
We use cookies to ensure that we give you the best experience on our website. If you continue to use this site we will assume that you are happy with it.OkPrivacy policy