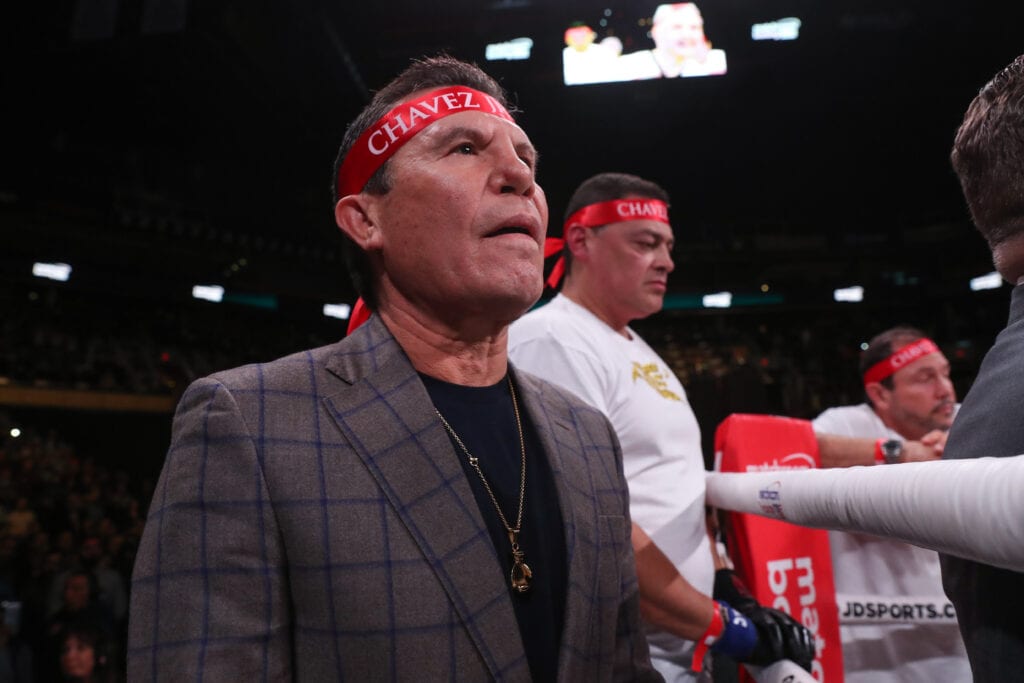 The bout between Chavez and Taylor dubbed “Thunder Meets Lightning” would produce just that, as the HBO broadcast of the fight was right off the heels of their recent show of James “Buster” Douglas defeating Mike Tyson in still to this date one of boxing’s biggest upsets. That upset of Tyson shifted the focus of what was “Tyson-mania,” and this bout was one of the first ones to benefit from it.

The build-up to this unification bout is a long one. Chavez came into this contest with a record of 68-0 with 55 knockouts. At this point in his career, Chavez was a three-time world champion in the Jr. Lightweight, Lightweight, and currently the Jr. Welterweight division, which he held the WBC belt facing Taylor.

Taylor came in undefeated as well at 24-0-1, with 14 knockouts and was apart of the 1984 USA Olympic boxing team that also had future greats Evander Holyfield and Pernell Whitaker. Taylor was making the third defense of the IBF title belt he won from James “Buddy” McGirt back in 1988 by stopping him in the final round of their contest. 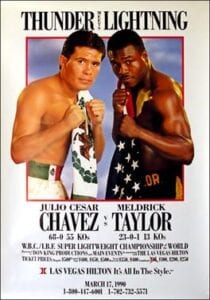 Once the bell rang on this one, it was clear that Taylor and his footwork was quicker and faster than Chavez as he was able to be him to the punch early on, seemingly winning rounds handily. As the fight went on, however, you can see that Chavez and his power were wearing down Taylor.

Taylor, as the fight went on, was not only getting tired, was getting beaten up for his efforts. Taylor’s face showed the punching power of Chavez as it was swollen and bones in his eye socket broken as well. Taylor also started bleeding through his mouth as early as the second round of the fight, which didn’t make it any easy for him as it went on. The broadcast mentioned that the cut in Taylor’s mouth might have been suffered in camp leading up to the fight, but Chavez in the fight opened it up either way.

Despite all this punishment, Taylor was seemingly ahead on points in the fight entering the twelfth and final round and was on his way to victory. Chavez, in the last minute of the battle, decided to pour it on as it seemed to be the only way he could win was by knockout.  Chavez got just that with a right that sent Taylor down in the corner. Taylor got up from the knockdown in the final moments but after the standing eight count from referee Richard Steele, waived the fight over and Chavez victorious and new unified champion with less than ten seconds to go in the contest.

The stoppage is excellent timing cause as Larry Merchant says on the broadcast, “If he gets up, he wins the fight,” you get Steele signaling that Taylor no longer could continue moments later with an irate Lou Duva in the background.

Steele, after the fight, was asked if he had any idea of how much time was left. He mentioned it wasn’t a factor in stopping the bout as he didn’t know.

“I don’t think about time when I’m in the ring,” Steele said after the fight to Sports illustrated. “I think about the fighter’s condition.” Steele also said that he had not seen the red light blinking, despite the fact that it was going on and off directly behind and above Taylor’s left shoulder. As he finished his standing eight-count, Steele was looking hard at the only two things that mattered at that point: Taylor’s eyes.

“Are you O.K.?” Steele asked him. Taylor, who later said that he could not hear the question above the noise, did not answer.

“I saw a great fighter who was beaten,” said Steele. “His eyes, his condition, told me that he’d had enough. Meldrick Taylor got up, but I was not going to let him take another punch.” Only two seconds were left in the fight when Steele raised his arms in the air and waved the bout to an end.

No question that anyone who saw the fight noticed that Taylor was a beaten fighter but was seconds away from becoming a unified champion at 140 pounds. These two as thrilling as this fight wouldn’t run this back again until 1994, which Chavez won by an eighth-round stoppage. Taylor, in between that time, moved up to welterweight as he was complaining of weight issues. It wasn’t until he decided to move back down for the rematch dubbed “Unfinished Business” in 1994 back down to 140.

If somehow you have not seen the fight of the 1990s for its drama and action, I highly suggest you check out the video above as this fight will hold up in any time or place in the world of boxing.

40 years ago Salvador Sanchez outgunned “Little Red”
Morales-Pacquiao I took place 15 years ago
Advertisement
To Top
We use cookies to ensure that we give you the best experience on our website. If you continue to use this site we will assume that you are happy with it.OkPrivacy policy