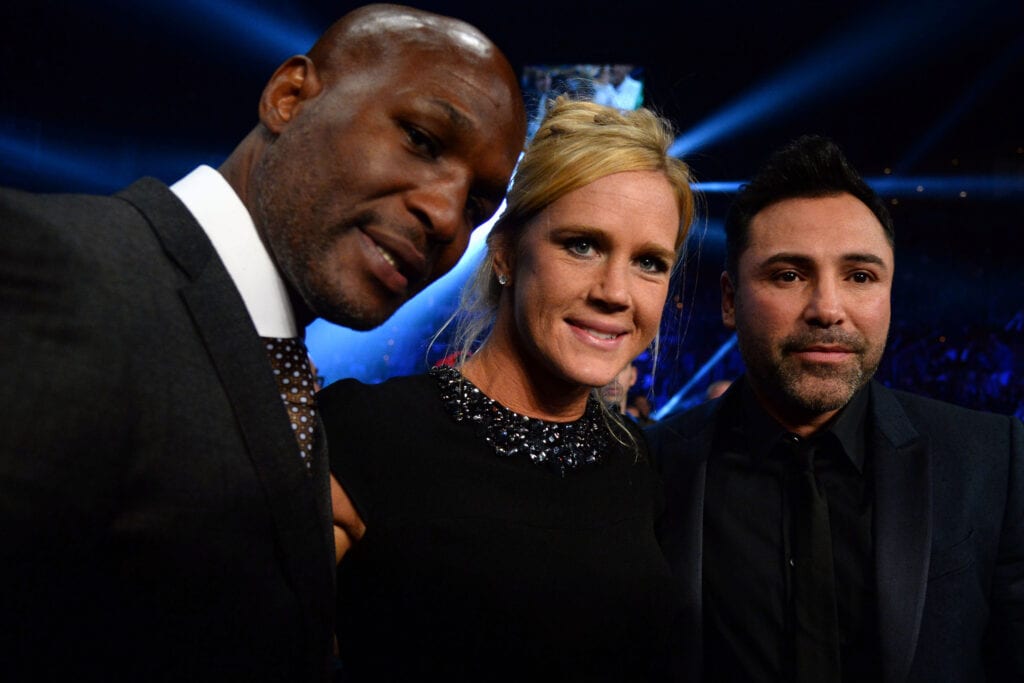 On September 18, 2004, the undisputed middleweight championship title was up for grabs as Benard Hopkins took on Oscar De La Hoya at the MGM Grand in Las Vegas, Nevada. The fight itself which aired on HBO pay-per-view generated a million buys and $56 million.

Hopkins, who was the 2 to 1 favorite in this fight even at the age of 39, was carrying three of the four sanctioning belts at middleweight. Weight was the reason because De La Hoya was fighting this contest with Hopkins at the catch weight of 158 as he was the smaller of the two. De La Hoya was also the underdog into this fight as he was coming off a close victory of Felix Sturm to gain the WBO title at middleweight. 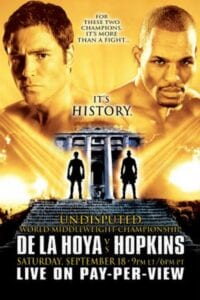 The fight itself was a tactical one in the ring. One factor being at least for De La Hoya, on September 15 after a light workout, cutman Joe Chavez was removing the tape from De La Hoya’s left hand when he accidentally sliced him between the second and third fingers. Dr. Biff McCann administered an injection of lidocaine and closed the wound with 11 stitches. De La Hoya informed the Nevada State Athletic Commission in case the substance showed up in his post-fight urine test. De La Hoya did not make an issue of the cut after the fight. He said the hand was “perfectly fine. I was popping him with jabs. I felt fine. He caught me with the right punch, that’s it.”

The broadcast in the middle rounds suggested that the hand could’ve been stitched with only 4 to 5 stitches, but they used 11 as a precaution for De La Hoya.

The action picked up in the seventh round with both men landed combinations and begin throwing more punches as this started as a defensive-minded contest. Hopkins in the ninth round with 1:34 left hit De La Hoya with a left hook to the body that sent him down and down hard. De La Hoya made no effort to get up after that liver shiver, and referee Kenny Bayless counted him out, giving Hopkins the victory and the undisputed champion at middleweight for the second time.

The victory for Hopkins was the first time that anyone at middleweight was able to unify the belt at that weight class. Hopkins would go on to age 40 continue and made his 20th successful title defense, defeating Howard Eastman in 2005 before finally losing the titles to Jermaine Taylor on July 2005.

De La Hoya in recent times has joked about still feeling the body shot that Hopkins gave him from this fight. Check out below and see why they the now Nevada Hall of Famer Hopkins was called “The Executioner.”

Muhammad Ali got revenge on Ken Norton
Antonio Tarver- Roy Jones III went down today
Advertisement
To Top
We use cookies to ensure that we give you the best experience on our website. If you continue to use this site we will assume that you are happy with it.Ok