On October 1, 2005, Roy Jones Jr. and Antonio “The Magic Man” Tarver meet for the third matchup in their trilogy which took place at St. Pete Times Forum (now Amalie Arena) in Tampa, Florida.

A packed house of 20,895 saw the IBO Light heavyweight title on the line as two big names in Florida boxing battle which was aired on HBO pay-per-view.  That was the only titles on the line for the matchup as Tarver at the time who held the WBA, and WBC titles decided to vacate those belts to face Jones for the third time instead of taking on mandatory challenger, Paul Briggs.

The third contest was labeled “No Excuses,” which came about from Tarver to Jones in the ring after the referees’ instructions before the second fight. The referee asked both fighters, as a customary procedure, if they had any questions, and Tarver asserted: “Yeah, I got a question. You got any excuses tonight, Roy?” 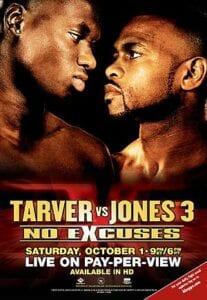 Once the bell rang, this fight relayed a tale more along the lines of the second fight with Tarver being more f the aggressor for the majority of the battle. This gameplan would be a riding theme as Tarver was able to land more shots as he was the more active fighter.  The packed arena in attendance (me included) noticed this as by the second half of the fight Jones became inactive. Chants of “Tarver! Tarver!” broke out in spurts throughout the match but clearly heard for the Tampa native in the latter rounds.

Tarver said after the fight, “He was beat by a better fighter. Period. I am one of the best fighters in the world. Give me my credit. You all thought I would be one-punch happy but I passed my test. I did my homework. I took nothing for granted. I wasn’t assured of victory until they raised my hand.”

Check out below this bout which was an impressive display by the Magic Man.

Bernard Hopkins defeats Oscar De La Hoya
Russia-Ukraine Story 10 Years in the Making
Advertisement
To Top
We use cookies to ensure that we give you the best experience on our website. If you continue to use this site we will assume that you are happy with it.Ok