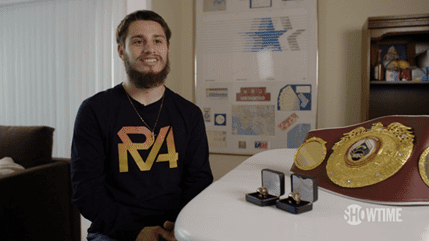 Ruben Villa to fight on next edition of ShoBox

Ruben Villa is back in action and is making his return on his second consecutive ShoBox: The New Generation appearance of 2019. Villa (15-0, 5 KOs), is an up and coming featherweight prospect that will be the headliner when he takes on top-15 ranked contender Luis Alberto Lopez this Friday, May 10 (10:30 p.m. ET/PT) from Omega Products International in Corona, Calif.

Showtime Sports released a “DAY IN CAMP: Ruben Villa” video feature that captures Villa’s humble mindset, grueling training regimen and hunger for success as he prepares for the toughest test of his career.

Villa’s training begins in the morning at the Robert Garcia Boxing Gym in Riverside, Calif., where the 22-year-old works on his footwork and technique under the guidance of trainer Max Garcia and ends with a 5-mile run through the Riverside hills. In between that, Villa goes through an intense sparring session and watches tape from his last fight where he dispatched then-unbeaten Ruben Cervera in the first ShoBox telecast of 2019. In that contest, he had beaten Cervera in an 8 round contest and dominated for the majority decision.

Lopex (17-1, 8 KOs) was last in action in February where he was victorious against Ray Ximenez by majority decision.

“Once I’m able to call my own shots and have a world title, I want to be able to say I fought the best and I beat the best.”

Friday’s ShoBox telecast immediately follows the premiere of ALL ACCESS: WILDER vs. BREAZEALE at 10 p.m. ET/PT on SHOWTIME.