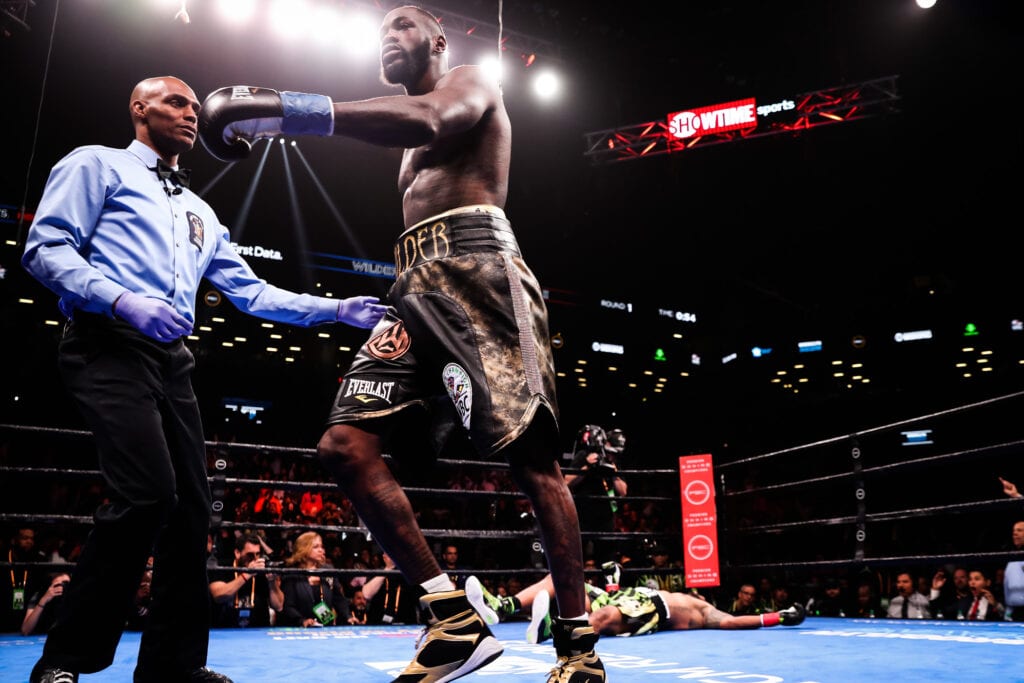 Less was more on Saturday night for Wilder- Inoue

(Off an exciting first round, one-punch KO of Dominic Breazeale in Brooklyn, NY, Deontay Wilder has generated serious buzz around himself and his short term future. Also, Japanese World Bantamweight champ, Naoya Inoue, scored an equally impressive knockout win Saturday in Scotland. David Payne, in a column originally appearing on Boxingwriter.co.uk, is back with his thoughts on how “less is more” applied to boxing rings on two continents Saturday.)

German-born American architect Ludwig Mies van der Rohe, or Mies as he was widely known, gilded the phrase ‘Less is more’ while writing in the New York Herald Tribune in 1959.

A phrase that informs much of the modernist movement of which Mies was a pioneer in his works in Germany, Spain and the United States and may predate his seminal use in his essay on Restraint in Design. Robert Browning, the great poet and playwright, may also contest the origin, but it was Mies who substantiated the philosophy in bricks, mortar and steel.

Mies celebrated the beauty of the necessary and the restraint required to resist all but that which is essential for the building to function. Every single structure he was commissioned to design in America remains in place and in use.

In the present era, in which boxing’s beauty is obscured and disfigured by the posturing and politicking of promoters and champions, with the rampant virility of sanctioning bodies’ influence tugging and displacing the sport’s very foundations, there was a refreshing simplicity to Saturday night’s action. In the contrasting displays of Wilder and Inoue, much that is great in boxing, that which enthrals us, entwines itself about our spirit and soul was available to see.

The selection of Dominic Breazeale as Deontay Wilder’s opponent was not met with universal glee. Not quite contempt, these are modest times, but as a just another fighter with a record of sparse substance, in keeping with the modern era in to which he was born, but one unlikely to convince older readers he would have lasted 5 rounds with Quarry, Big Cleveland or Bugner let alone their illustrious contemporaries. Okay he might have got through with Joe.

Pragmatism pointed to Breazeale’s size; he was at least big, had evidence of grit from his courage in the face of a rampant Joshua. On a side note, enforced pragmatism has been a currency in boxing for far too long. I digress. Like so many of his contemporaries, Breazeale lacked more than he had. His primary flaws, the absence of a meaningful jab, a structural necessity for his offence, and a defence a kin to those pixel bunkers we hid behind on Space Invaders in the 80s, i.e. of little use once the bombs started dropping, were significant. And on Saturday, inescapable.

However, the greater talking point has always been the holes in Wilder’s technical composition. At 33, 42 fights into a career that began a decade or more ago, those flaws will endure. No trainer, victory or loss will remove them. On the evidence of Saturday night, does anyone really care any more? Wilder doesn’t have much. But what does possess makes up for that which was omitted in his design. If he hits you on the chin, the will to stand disappears and you are almost instantly rendered derelict.

Only the miraculous resurrection of Tyson Fury and the even more miraculous knowledge that Bermane Stiverne once completed 12 rounds with Wilder blight an otherwise ‘perfect’ resume. Forget the imperfections of his style, the mediocrity of the first 35 or so opponents, less really is more with Wilder. Knockout power of the type he has trumps all but the greatest. Perhaps Fury is, or can be, one such great, hopefully, time will one day tell.

As William Dettloff understandably and beautifully lamented, in response to Fury’s suggestion he would easily beat Wilder in a rematch, with a rich sauce of sarcasm liberally ladled on, “If only there was a mechanism by which it could be determined if he was right.”

Now doesn’t feel the time to succumb to the cynicism though I understand William’s continued frustration. But when boxing serves lemonade, lets enjoy the refreshment, not ask for the lemons back.

The less is more offered by Japanese bantamweight Nauyo Inoue is different, his minimalism is different. Where Wilder lacks precision, skill and guile, though he may have more of the former than previously ventured, Inoue has all in abundance. Able to lead and counter, be in range and yet out of range, his success is built upon an astonishing judgement of distance, exceptional footwork, handspeed, reading of opponents intent, an ability to engineer openings and devastating power.

Gut wrenching, tell your friends, shout your wife, nudge your sleeping children awake type power. Both hands, to head and to body. And all with that haunting, expressionless face. His victory over Emmanuel Rodriguez on Saturday night in Glasgow, a solid champion with power and belief of his own, was brutal. Memorable. Exciting.

And boxing was overdue some excitement. Josh Taylor and Ivan Baranchyk afforded us competitive action. Durability, skill, will. But Wilder and Inoue, with fewer punches, with less of themselves sacrificed, achieved even more. Writ their names large in boxing’s peculiar eco-system and beyond, into the viral world we are all party too.

Wilder, by virtue of Fury’s astonishing powers of recovery and his own cannon ball right hand, has surely propelled himself from relative obscurity to national and international renown by the power of social media. In doing so, he helps the prospects of the necessary fights with Fury and Joshua grow closer to the commercial zenith their respective handlers are waiting on before becoming serious about signing contracts.

Inoue meanwhile, he just scared everyone from Bantamweight to Featherweight, and maybe a nudge beyond too.

Following a weekend of boxing, I have nothing negative or cynical to say. The weekend reminded me, and the reminder was much required, that boxing can be a Die Hard film, it doesn’t have to be Waiting for Godot.