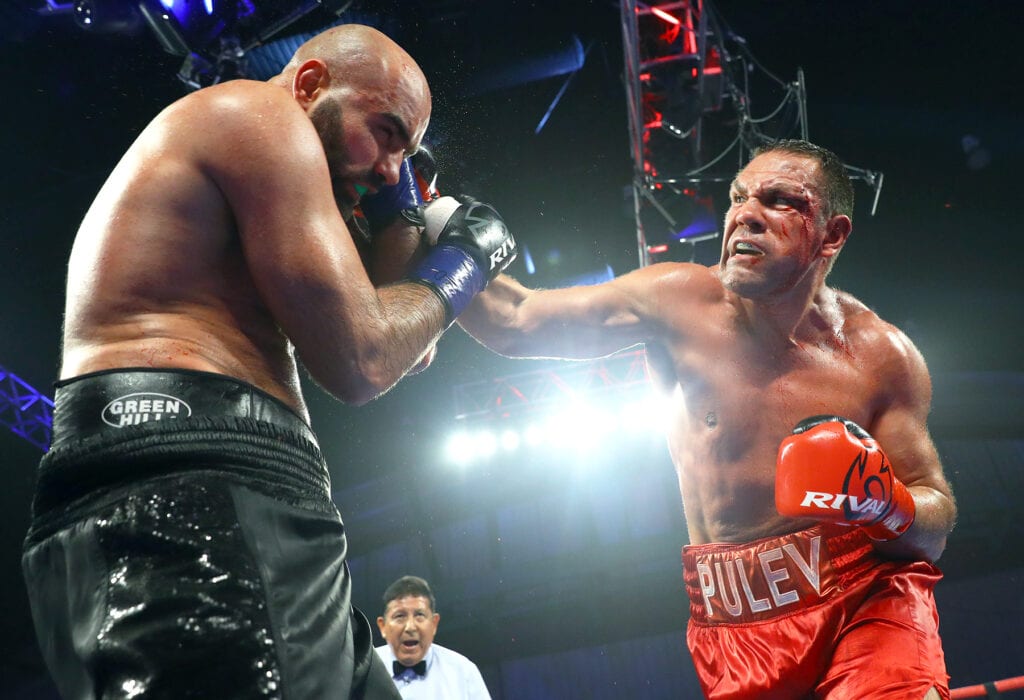 Kubrat Pulev victorious in US debut

The main event of last night’s Top Rank Boxing card had the heavyweight contender Kubrat Pulev in action against veteran Bogdan Dinu. The fight that was announced as a sellout on the broadcast at The Hangar in Costa Mesa, Calif did not disappoint as the Bulgarian fighter jumped into the ring over the ropes to a crowd who was fully behind him.

He stated before the fight “I hope that I do a very great today and show the world I’m the best boxer and heavyweight champion.”, and after his stoppage of Bodgan Dinu in the seventh round in a bloody main event match, he may have a legitimate claim.

The No. 1 IBF contender remained that way as he moved to 27-1 but it didn’t start off as he may have intended to Dinu wasn’t going to be an easy out in this fight. Both fighters started the early rounds off feeling each other out, trying to establish the jab in hopes of leading into more powerful combinations. What separated the two early is that Pulev has what seems to be a heavy jab where he throws the jab but follows it up with power shot which was trying to keep Dinu off balanced. Dinu early on seemed to be the aggressor in the third and especially fourth round, leading to a cut on Pulev that began to worsen as the fight grew on as that became Dinu’s course of attack.

After getting bloodied by Bogdan Dinu early in the fight, @KubratPulev scores multiple knockdowns on the way to a KO victory!! ?#PulevDinu | @ESPN pic.twitter.com/jSHZqnRl2S

By the fifth round, Pulev decided to take charge and control of the fight which in the seventh started a flurry of knockdowns which will make everyone’s Top 10 for the year once it is all said and done. The ref finally stepped in after the third knockdown of a visibly beaten Dinu at 2:40 of the seventh round.

“This is just part of being in a fight. The cut was not such a big problem. Sometimes blood makes me very hungry”, said Pulev after the fight. “I was very well prepared. I was ready for anything. At this moment I feel I can do anything inside the ring. I showed very good boxing skills. I also showed that I have good punching power and a good strategy”.

With his victory keeping his status as the top IBF contender, we await and sees if he’ll get his shot at Anthony Joshua as he is in action in June against the only loss for Pulev, Jarrell Miller.

.@KubratPulev kept his confidence as he knocked Dinu down three times! The final knockdown in the 7th-round lead to Pulev's victory ? #PulevDinu pic.twitter.com/NdnohCJ5xh