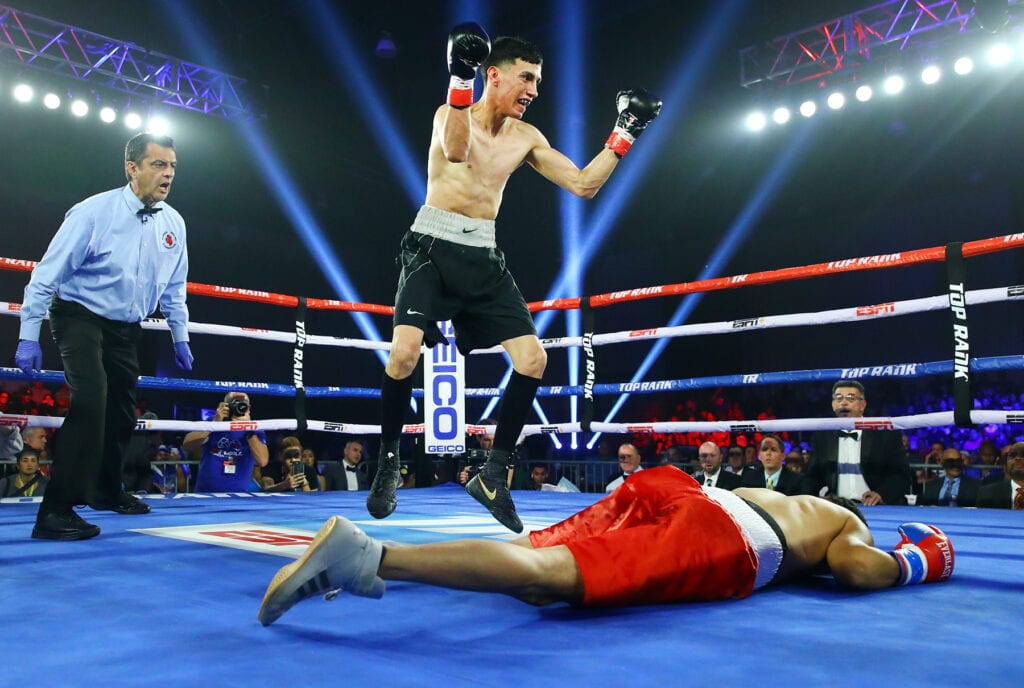 Knockout Kissimmee was the theme of Ito-Herring

The co-main event and undercard of this night, however, had one theme and one theme only.

I mean, there were a few anomalies in between of this goal like the opening unaired bout which featured former super flyweight world champion Carlos Cuadras (38-3-1, 27 KOs) cruise to an eight-round unanimous decision over Daniel Lozano (15-7, 11 KOs) in a bantamweight contest which was one-way traffic for Cuadras.

There was even a no contest as well such as in the vacant WBO international junior bantamweight title match. Koki Eto (24-4-1, 19 KOs) and Jeyvier Cintron (10-0, 5 KOs) fought to a no-contest after it was determined that a headbutt knocked out Cintron. The Florida State Athletic Commission reversed the initial ruling of a first-round knockout for Eto a half hour later, leaving the title vacant. They spent a great deal of time looking at the replay tape before making the decision to reverse it.

Outside of that, it was bodies hitting the mat quickly and often on this fight card.

It started with Steve “So Cold” Nelson improving to 14-0, knocking out Victor Darocha (8-5-1, 6 KOs) in the seventh round of a scheduled eight-round light heavyweight bout. This strangely was not part of the streaming card but Nelson was dominant in this one.

Steve "So Cold" Nelson knocks down Victor Darocha then goes on the offensive and the ref calls the fight!! Nelson with the 7th Round TKO victory! pic.twitter.com/zZ8Mj5thcf

Puerto Rican featherweight prospect Orlando Gonzalez (11-0, 8 KOs) opened up the ESPN+ portion of the card made it look easy, knocking out Roxberg Patrick Riley (13-2, 7 KOs) at 2:44 the third round. Gonzalez ended affairs with a right hook. Riley got to his feet but stumbled into the ropes, forcing the referee to stop the fight and Riley from taking more punishment.

Orlando Gonzalez knocks down Patrick Riley with the right hand and this one is over!! #ItoHerring pic.twitter.com/p416LKIeDi

The knockouts were coming so quickly that they had to air the swing bouts on the ESPN+ portion of the card to give some time. They wouldn’t get much as Marco Diaz (2-0, 2 KOs) needed only 50 seconds to knock out Edgard Figueroa (3-2, 1 KO) in a scheduled four-round featherweight bout.

Middleweight sensation Edgar Berlanga (11-0, 11 KOs) got in and got out in 43 seconds against Gyorgy Varju (7-5, 4 KOs), as a right-left combination floored the Hungarian for the count. Berlanga earned his 11th straight first-round knockout to begin his career.

“Felix Trinidad called me just before I walked to the ring. That’s all the motivation I needed,” Berlanga said after the fight. “I hope I made him proud.”

That stoppage was followed up with another one by Puerto Rican super featherweight prospect Henry “Moncho” LeBron (9-0, 7 KOs). He stopped veteran Luis Ruiz Lizarraga Jr. (6-13-1, 2 KOs) in only 2:43 of the first round. Lizarraga’s corner signaled to the referee to stop the fight before the round ended. 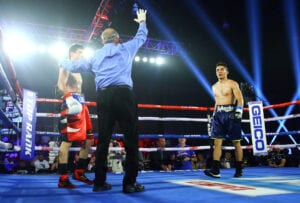 They went to the second swing bout on the card and it became the knockdown of the night when Jose Cardenas (17-4, 14 KOs) landed a crushing one-punch knockout over 2016 U.S. Olympian and local fighter Antonio Vargas (10-1, 4 KOs) at 1:53 of the opening round of a scheduled eight-round bantamweight bout. A right hand caught Vargas’ clean and he landed face-first to the canvas ending the bout after the ref started his count. He realized he wasn’t moving and then waived the bout over. Medical personnel checked on Vargas after the fight but he was able to move and get up.

Jose Cardenas knocks out Antonio Vargas in Round 1.#ItoHerring pic.twitter.com/BKFTSP15Uw

Featherweight Adam Lopez (13-1, 6 KOs) was next up on the knockdown train and not only was he apart of it, but he also rebounded and knocked out Jean Carlos Rivera (15-2, 10 KOs) in the seventh round of their contest. Lopez was knocked down in the second round by Rivera with a right but rallied back against him the ropes with a furious combination to end the sixth which the ref scored as a knockdown. Rivera came out for the seventh,  Lopez jumped on him from the start, forcing the referee to end the match.

“I started a bit slow, but I listened to my corner and made adjustments,” Lopez said after the fight. “I knew he had trouble making weight, so I kept pressing him. I saw my opportunity and took full advantage of it.”

Lopez turns it up and starts unleashing on Rivera!!#ItoHerring pic.twitter.com/xHO3o3sUEb

Pedraza knocked down Lozada with a counter left, which was the beginning of the end for Lozada, who  in March 2018 with a stunning 10th-round knockout of the previously unbeaten Puerto Rican star Felix Verdejo.

“I would like to be world champion again at 135, maybe make a title defense and then move up to 140,” Pedraza said thru a translator post-fight. “Lozada was a tough opponent who came to fight with all of his heart. He was a great test for me, and I passed it with flying colors. I can’t wait to see what is next.”

If you missed any of these stoppages from Kissimmee on Saturday night, check them out while they’re still on ESPN+. These fights were fun, quick and had every boxing fans ultimate dream, delivered knockouts.

Pedraza knocks Lozada Jr. down then comes back for more before Lozada’s corner stops the fight!! 😱#PedrazaLozada #ItoHerring @ESPN pic.twitter.com/hoyBkVVOLV

Herring new champ after battle with Ito
Hunter drops Maldonado, wants Whyte if not Joshua next
Advertisement
To Top
We use cookies to ensure that we give you the best experience on our website. If you continue to use this site we will assume that you are happy with it.Ok