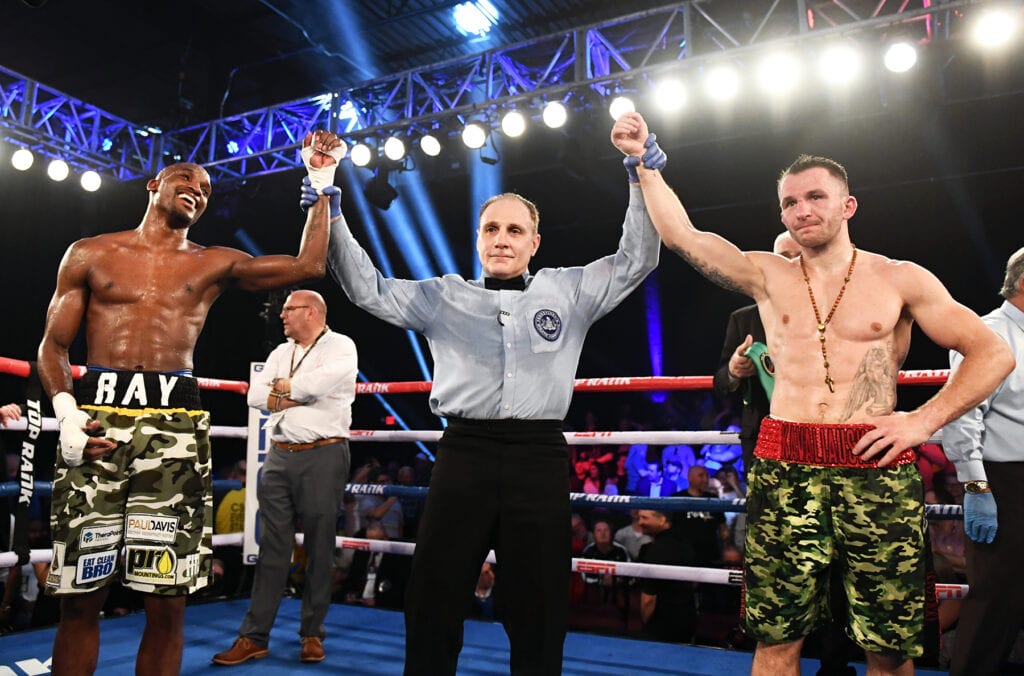 WBO No. 1 welterweight contender Egidijus “Mean Machine” Kavaliauskas walked out of  Philadephia Saturday night unbeaten record, but to many watching the fight seemed like a defeat as he squared off to a 10-round majority draw against local fighter Ray Robinson.

Kavaliauskas (21-0-1, 17 KOs) pressed the action early, but neither guy showed any punishment in what was a battle of counter and positioning. The final scorecards of 97-93 Robinson and the other two at 95-95 a piece displayed a fight in all honesty, nothing was being done by both fighters to swing the fight in their direction for a clear victory.

For Kavaliauskas, he still hopes this bout leads to a title opportunity.

“I won the fight, and I won it clearly,” Kavaliauskas said. “The judges did not agree, and I can’t control what fight they were watching. I still want to fight for a world title because I consider this fight a victory. I am still undefeated, and I know I can beat all of the champions in the welterweight division.”

Robinson (24-3-1, 12 KOs) during the post-fight interview believes he should be next up in line to take on Terrace Crawford.

“I think everyone in Philadelphia knows I won this fight,” Robinson said. “At the end of the night, I know I beat him. I’m the last person to beat Terence Crawford in the amateurs, and that’s the fight I want.”

The outcome of this fight is disappointing on both ends. Many who thought Kavaliauskas as the favorite would cruise in this match and would more than likely set up a shot for him down that line as a mandatory for Crawford’s WBO title.  In a match where neither guy took control of the fight or stood out above one another, this majority draw in the eyes of many seems like a loss for Mean Machine. What I also found amusing is that Robinson who hasn’t been in action since being stopped by Yordenis Ugas in February of 2017, tried to play up to the crowd post fight to little if any reaction to the hometown crowd. Both fighters believe they deserve a chance to take on Crawford, but at the end of this draw, it’s hard to say you would pick either one.

Vendetti victorious over Zavala on FIGHTNIGHT LIVE
Gvozdyk winner after injury suffered to Ngumbu
Advertisement
To Top
We use cookies to ensure that we give you the best experience on our website. If you continue to use this site we will assume that you are happy with it.OkPrivacy policy