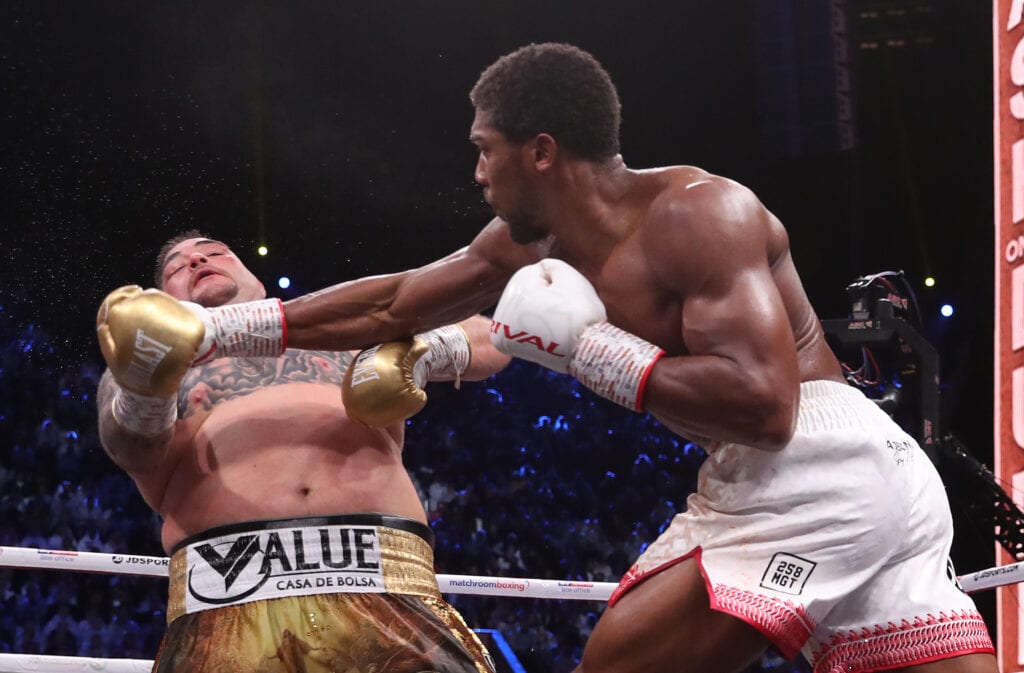 Joshua regains against Ruiz in rematch

The much-anticipated rematch heavyweight main event in Saudi Arabia played out like a broken record as Anthony Joshua was able to recapture the WBA, WBO, and IBF belts from Andy Ruiz Jr. in a low-risk taken main event.

The final scorecards for this contest reflected the one-way action in the ring with scores of 118-110 x 2 and 118-109 all in favor Joshua who wins the belts back from Ruiz, who won them back in June from him.

This fight started out like the first one. That was with Joshua keeping his distance on the outside and keeping Ruiz away with the jab. Make for most uninteresting boxing on the DAZN broadcast from a cold and rain-laden night in Saudi Arabia. It was apparent that Joshua was going to keep Ruiz away from getting inside by any means necessary.

The smaller Joshua made extensive use of his movement to play keep away from Ruiz early, and Ruiz wasn’t able to land anything of significance.

This process continued for the second half of the fight, as well. At this point, Joshua was banking rounds doing the same to make sure that Ruiz would have to contend with the jab of Joshua. Dull but was effective throughout.

The championship rounds showed a little more effectiveness by Ruiz and he was able to fight through said jab and try to land inside. Ruiz has gotten a few shots in pockets and was looking to try to land the big shot but was unable to catch up to Joshua.

Much was made about Ruiz coming in fifteen pounds heavier at the weigh-in the day before, which to many skeptics didn’t play a factor in this fight at all. It did, however, make for Joshua a target to land the occasional body shot, especially in the opening rounds.

Teixeira outlasts Adames in war to capture title
Navarrete, Ancajas victorious in Pubela
Advertisement
To Top
We use cookies to ensure that we give you the best experience on our website. If you continue to use this site we will assume that you are happy with it.OkPrivacy policy