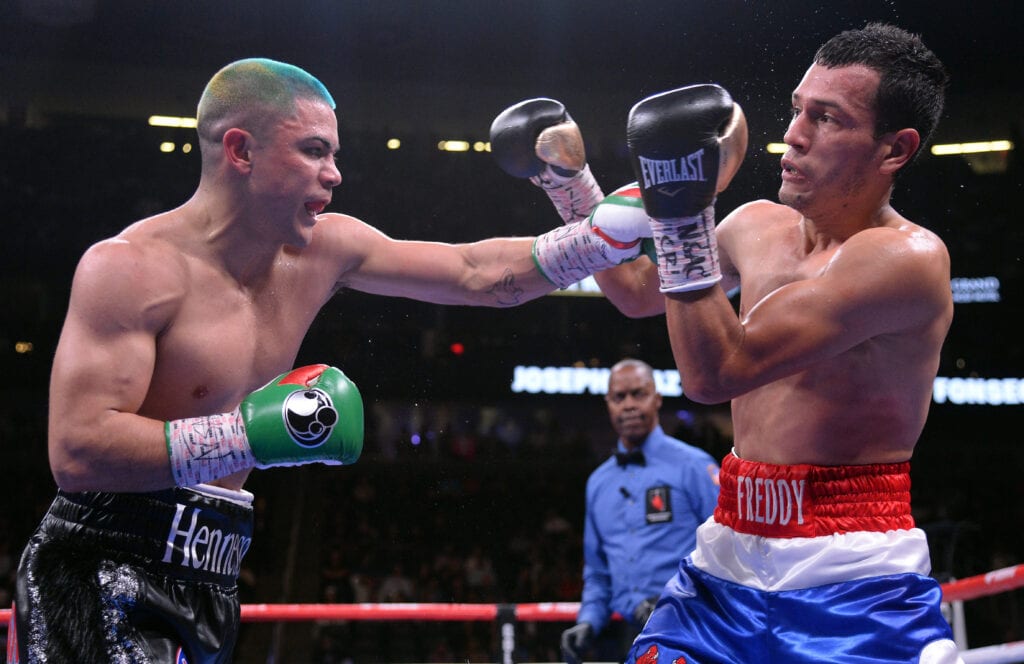 Diaz won by technical knockout in the seventh round as Fonseca’s corner threw in the towel after Diaz was administering punishment throughout the fight on the overmatched Fonseca. His fight was part of the Canelo Alvarez-Daniel Jacobs undercard.

Diaz wants to remain at super featherweight with plans to start a showdown with Farmer, who told reporters that he stepped to Diaz because the Mexican-American fighter had supposedly disrespected him on social media.

“I felt really good at 130,” said Diaz to the media. “This is my second fight at this weight and I felt very comfortable. Like I said, 126 was just way too hard for me. I wasn’t able to showcase the power I actually have. Now I’m able to showcase my skills, my defense, my head movement, everything. I feel like I have it all at 130. Tevin where you at?”

“I just feel a lot stronger. I’m able to make more changes and take more risks because I’m not worried in my head that I’m going to get tired or that my body’s going to get fatigued in the later rounds. At 130, I’m feeling strong, like a beast, and I’m going to become a champion, I promise you guys.”

“I was dealing with depression and I was almost at the end of the road, I was at rock bottom last year. I was going through a lot, a lot of people don’t realize this. I was really going through some tough, tough times. I want to thank my mom, my sisters, my family, God almighty, for not doing anything stupid. Anyone suffering from depression, trust me, everything is going to be okay.”

“I’m ready for a world title my next fight. I wanted Tevin Farmer on this card. Then he started to talk all this smack on Tuesday and that he pressed something. He didn’t press anything. Let’s get it Tevin, let’s get this fight.”

Farmer on Sunday responded in a tweet saying that Diaz wants a fight with him, he suggested that Diaz’s promotion company Golden Boy Promotions, pay the fee to the International Boxing Federation (IBF) for his ordered mandatory against Guillaume Frenois.

If GOLDEN BOY REALLY WANT IT. PAY ME WHAT I WANT. PAY MY MANDATORY STEP A SIDE MONEY AND ILL BEAT DIAZ ASS IN JULY? if y’all ain’t willing to do that. Stop talking.