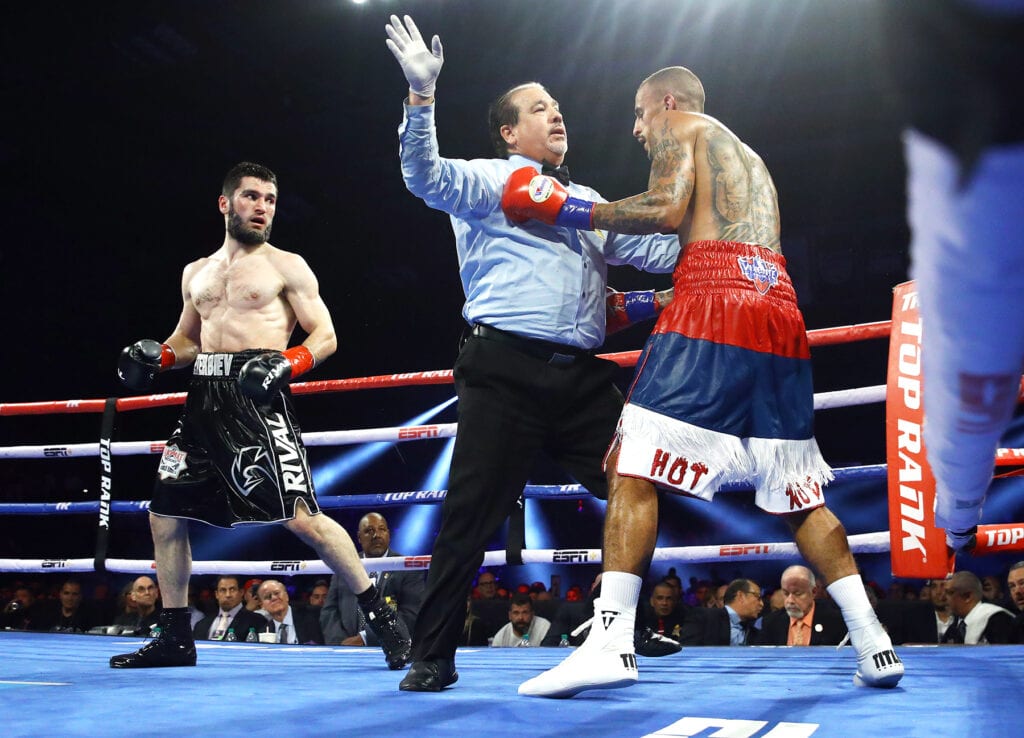 Artur Beterbiev knocked out the hard-hitting Radivoje “Hot Rod” Kalajdzic in the fifth round in front of 10,105 fans at Stockton Arena to retain his IBF light heavyweight title. That announced crowd was visibly not present or on the way out as local star, Gabriel Flores Jr., knocked out Eduardo Pereira Reis with a nice left hook in the third round of a scheduled six-round lightweight bout amongst a raucous crowd.

Beterbiev (14-0, 14 KOs) retains his IBF light heavyweight world title for the second time and now is looking next at on unification bouts.

“I worked very hard for this fight. I went 100 percent in the gym. Maybe one day I’ll show my boxing skills,” Beterbiev said after the fight. “I want unification fights. It doesn’t matter who it is. I am happy to be working with Top Rank and ESPN.”

Beterbiev put down down Kalajdzic (24-2, 17 KOs) at the end of the third round, and Kalajdzic stumbled back to his corner after being saved by the bell. He had also gotten the upper hand in an exchange at near the end of the fourth round causing referee Dan Stell to warn Kalajdzic to end the fourth. Once the fifth started, Beterbiev got Kalajdzic to the ropes, he unloaded to the head and body and caused the referee to step in and put an end to the fight.

With the stoppage, Beterbiev still has a 100 percent knockdown ratio and we’ll see if this sets up a unification bout with Dmitry Bivol soon.

The ref stops the fight after @ABeterbiev proves to be too much for Kalajdzic. The world champ retains his belt with a TKO victory!!#BeterbievHotRod pic.twitter.com/oos50omeHq

The highlight of the show was the man who bought the crowd in, Gabirel Flores Jr.

Stockton’s hometown hero, Flores Jr., knocked out Eduardo Pereira Reis with a single left hook in the third round of a scheduled six-round lightweight bout.

Flores Jr. (13-0, 6 KOs) dominated the first two rounds landing combinations at will, and in the third, added the one-punch takeout.

“It felt amazing. This is where I was born and raised. This is what I worked for. “A lot of people came out {tonight}. I am Stockton’s king,” Flores said after the fight. “I dedicate this fight to my mother. I know she is looking down on me and is so proud.”

The world’s longest-reigning 115-pound world champion, Jerwin “Pretty Boy” Ancajas, continued his reign as Ancajas (31-1-2, 21 KOs) retained his IBF junior bantamweight world title for the seventh time with a seventh-round stoppage over No. 1 contender Ryuichi Funai in the opening bout of the ESPN televised main card.

“Funai has a champion’s heart. He took my best punches. I have nothing but respect for him,” Ancajas said after the fight through a translator. “This was the best training camp I had in a very long time. We changed some things in training and we hired a nutritionist, which helped me make the weight a lot easier. That showed in the ring tonight. I felt great at 115 pounds, and I will be able to make that weight for a long time.”

Ancajas established the jab working early and Funai (31-8, 22 KOs) and his face was the recipient to the avalanche of power punches after round two. By the fourth round, Funai’s face was bruised and cut, and by the seventh round was set to start, the ringside physician smartly stopped the fight, and Ancajas secured his first stoppage win in three fights.

Alvarez victorious against Jacobs to unify Middleweight crown
Diaz stops Fonseca, wants Farmer next
Advertisement
To Top
We use cookies to ensure that we give you the best experience on our website. If you continue to use this site we will assume that you are happy with it.Ok