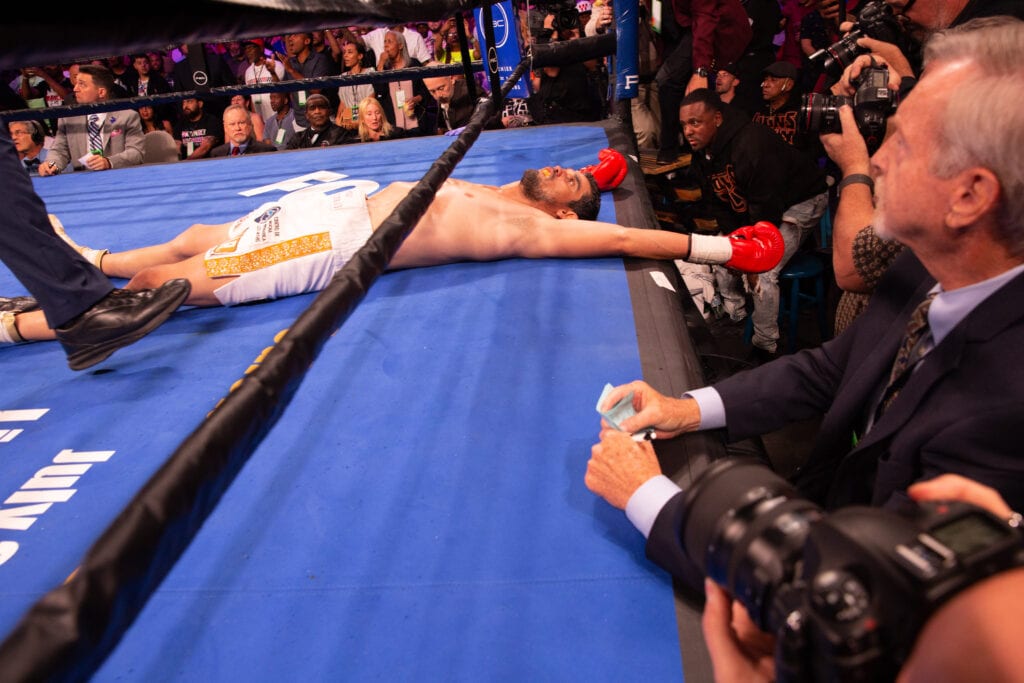 Super Welterweight Jermell Charlo was supposed to take on Tony Harrison in their rematch Sunday night but due to injury faced Jorge Cota as a late replacement instead.

Three rounds later, we await that rematch as Charlo made a statement by dropping Cota to secure his title shot.

Harrison, who injured his ankle in training camp told Fox’s reporter Heidi Androl during the broadcast of the fight that he is starting rehab and should be able to resume training at the end of the month.

For the match itself, Charlo was in control throughout the whole contest, using his speed and quickness to disrupt the awkward style of Cota, who wasn’t able to get anything going. Cota did take this fight on three weeks notice and was determined to get a shot at Harrison had he been victorious.

That would not come to fruition as in the third round Charlo sent him down with a right, which would be the beginning of the end for Cota.

If one wasn’t enough, @TwinCharlo hit him with a second knockdown…JERMELL CHARLO IS BACK! pic.twitter.com/25nJDa13dK

Cota (28-4, 25 KOs) looked wobbly when getting up but referee Jack Nady let him continue, and that’s when Charlo landed another a right to laid out Cota to wave this one over. Cota was leaning on the ropes when the referee was giving his ten count in all honestly could’ve ended the fight there but instead, let it continue and what will for sure make everyone’s Top knockouts list of 2019 happened shortly after.

Charlo (32-1,16 KOs) said after the fight in a message to Harrison still in attendance, “Tony Harrison in the building, that’s his fault. He got a chance to see what the Charlo’s do. I’m a much better fighter, and he’s lucky he didn’t accept this fight with me this time.”

Haven’t heard back yet, but Tony doesn’t seem impressed… pic.twitter.com/OtKeAKBcb0

Also on the broadcast closed made a note of Anthony Dirrell will take on David Benavidez sometime in the fall for his mandatory WBC Super middleweight belt. Speculation and a safe bet are that this bout will more than likely occur on the recently announced card for pay-per-view between Shawn Porter and Errol Spence.