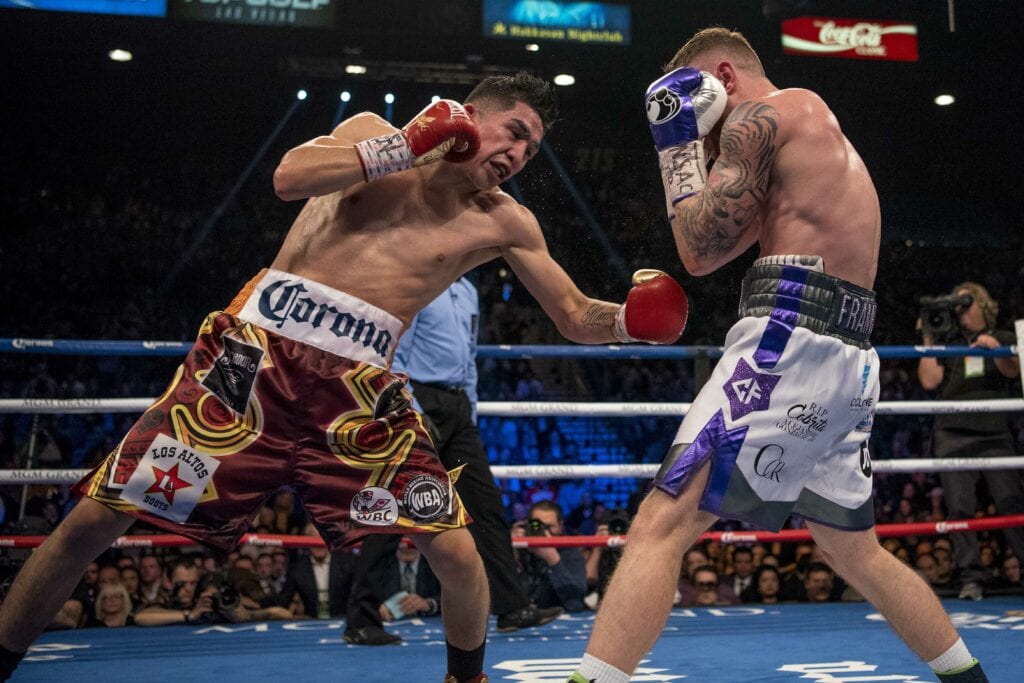 Saturday night Leo Santa Cruz returns back to action after an 8 month hiatus to put his WBA Super Featherweight belt on the line against Rafael Rivera. Rivera is stepping in after the intended matchup with Miguel Flores was scrapped after suffering an ankle injury last month. The 30 year old Santa Cruz has firmly established himself as a must see fighter, as well as, one of the best featherweights in the world.

And, he has endeared himself to boxing fans with his aggressive style of going after his opponent, being willing to eat a shot to give one with an incredible punch volume and equally impressive: willingness to engage.

Santa Cruz will provide some “featherweight fireworks” ripping off devastating combinations on his opponent and putting an overwhelming pace on Rivera. The 24 year old Rivera stands little chance in this bout. He’s stepping in with only a few weeks to prepare for one of the best featherweights alive.

Look for “El Terremoto” to put on a show in front of a hometown fanatical crowd Saturday night at the Microsoft Theater in Los Angeles. The effective aggression, clean combination punching, and work rate of the champion Santa Cruz will make for a thrilling display of his skills, but not a competitive match.

The beauty of boxing is in its uncertainty as sometimes an underdog flips the script, refuses to say “uncle” and summon a will strong enough to overcome the skill of the favored fighter. Nonetheless, boxing fans have plenty to be excited about with the return of Santa Cruz. That can be said for certain.

How Rivera pulls the shocker

Meanwhile, Rivera is coming off a first round knockout victory over Jose Ramos in October, snapping a 2 fight losing streak.

The most likely path to victory for Rivera is by scoring the spectacular knockout.

The champion, Santa Cruz, is not a hard man to find inside the ring. He will likely stand in front of Rivera or walking him down to unleash his offense. And, the way that Santa Cruz lets his hands go does leave him vulnerable to be hit, and Rivera does not appear to be a skittish puncher who needs lots of room to get shots off.

Plus, with 17 knockouts in his 26 fights, Rivera is coming off his first round KO in his last showcase and could shake up the featherweight division and boxing fans everywhere with a KO victory.

Though he will need to be willing to throw himself into the fire, accepting the pressure and offensive assault of Santa Cruz.