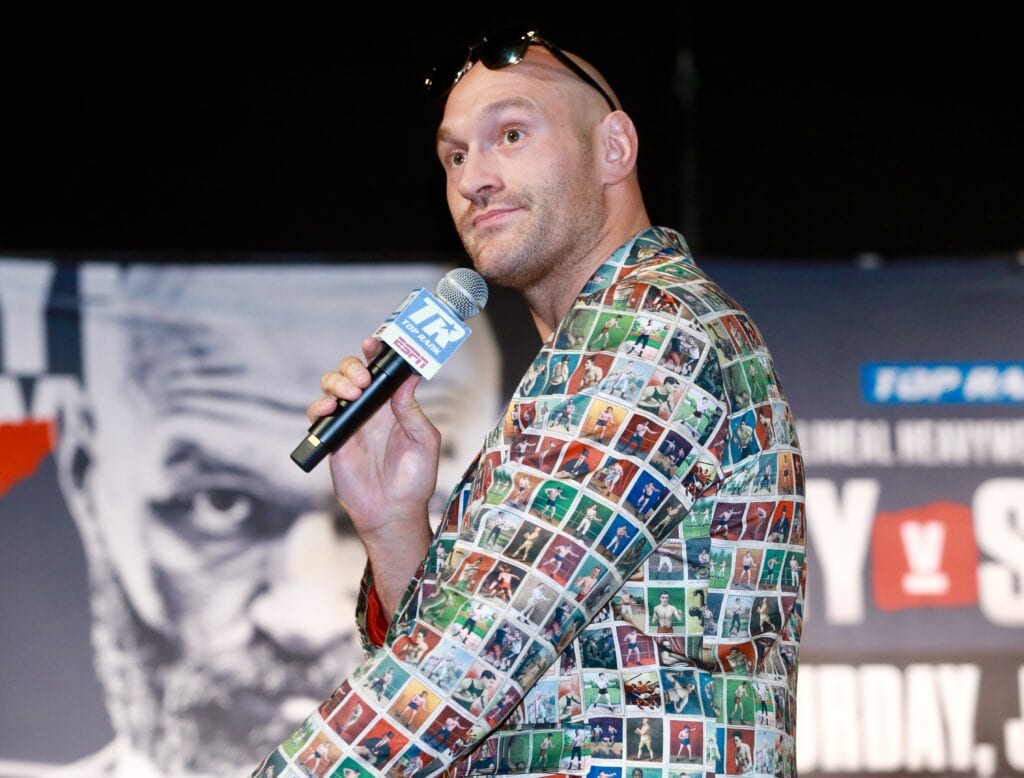 Tyson Fury back in action Saturday but far from big stage

Saturday night in Las Vegas, heavyweight contender Tyson Fury will be back in the ring trying to put himself in position for another title shot. However, the former Undisputed Champ is almost trapped in a no-win scenario, when he takes on a little-known unbeaten European Tom Schwarz.

Almost trapped, because he stared right at a rematch offer from WBC heavyweight champ Deontay Wilder in April and essentially said,”no thanks.” Fury and Wilder fought to a 12-round draw that many believe was unjust and Fury should have gotten the 12 round decision last December.

Yet, with Wilder wanting to fight him, it remains puzzling, as to why Fury would not go ahead take the rematch, regain his title and suddenly have all the leverage in the world in victory, as the new champ?

Instead, he’s almost trapped, because he chose to sign with Bob Arum and Top Rank Boxing (with a hefty four fight guaranteed payday) and still thought he would get his rematch with Wilder. Arum’s plan was to sign Fury and then eventually, lure Wilder to fight Fury through Top Rank and on ESPN pay-per-view late this year.

However, in the interim since Fury inked the deal with Arum, Wilder destroyed Dominic Breazeale with a one punch first round knockout in May and only increased his own leverage in doing so.

Now, Wilder and his promotional arm, Premier Boxing Champions, have announced that he will fight Luis Ortiz, not Fury in their separate rematch later this year. Curiously, then two weeks ago (on the day before Anthony Joshua’s American debut and upset title loss to Andy Ruiz) Wilder announced on social media that he would fight Fury next after Ortiz.

However, Fury confirmed to the media on Thursday that there is still nothing officially agreed to, much less signed and announced about a possible Wilder rematch. And, it only demonstrates the extent to which he’s trapped with a different promotion, without a title, and only hoping that that deal will get done.

And finally, there’s the quandary of the fight itself Saturday night. Because Fury is not a champion and because Schwarz is not even a legitimate highly ranked contender, the 30-year old Fury is basically “damned if he does, damned if he doesn’t” no matter what the outcome.

If he wins early and impressively? Then, the universal reaction will be “that’s exactly what you were supposed to do to Schwarz.”

If however this fighter is able to last five, seven or longer rounds with Fury? Then, the criticism will be: “if you can’t beat someone like that convincingly, why do you deserve to be on the biggest stage, again?”

And, then of course there’s the “armageddon scenario” that Joshua just found out about, where the little-known Schwarz somehow defeats Fury. And in that case, any hopes for a mega-payday and title shot for Fury would end, at least for the foreseeable future.

So, that’s the backdrop to Tyson Fury’s return to the ring seven months after he very nearly upset Deontay Wilder.

Only, he’s not fighting Wilder, again.

And, there’s no guarantee now, that he ever will.