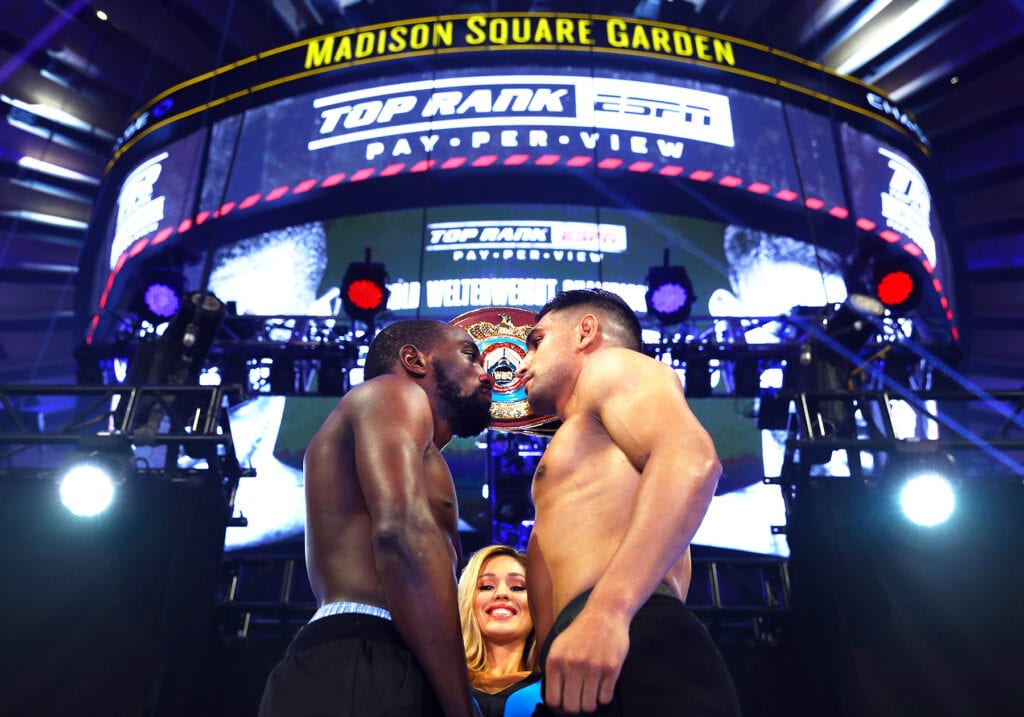 Saturday night, WBO World Welterweight champion Terence Crawford will headline a pay-per-view for the second time ever in his career. That’s when, he battles former Junior Lightweight Unified Title holder Amir Khan in a scheduled 12-rounder at Madison Square Garden.

Crawford (34-0, 25 KOs) is part of ESPN’s first ever foray into a full-on boxing pay-per-view produced by Top Rank Boxing, and them. And, it’s a testament to how much belief they have in what Crawford can do, especially for them at the box office.

It will be at the second defense of the title that Crawford won in June of last year when he wiped out Australia’s Jeff Horn the capture the WBO belt. However that doesn’t tell the full story, as Crawford has tremendous championship experience. In fact, going back to March of 2014, when he won the  WBO’s Lightweight Championship, Crawford has now fought 13 consecutive title fights, winning them all with 10 by knockout.

Up first T.J. is joined by Tony Boone of the Omaha World Herald newspaper. Boone has covered Crawford’s entire professional career fighting out of his hometown in Nebraska. Boone gives his insight into why Crawford is so competitive, as a person, and why Crawford believes this is the launching point to him getting a mega fight against either Errol Spence, Keith Thurman or another huge name soon.

Next up, Marquis Johns of Bigfightweekend.com jumps on to give his comments on the match-up at MSG Saturday night. This includes, whether Crawford almost has to be spectacular in victory to set up that huge payday down the road with one of the other Welterweight belt holders. And, does Khan (33-3, 20 KOs), have a realistic chance at an upset?

Marquis also gives his opinion on why American Heavyweight Michael Hunter is the proper solution for the Anthony Joshua-Jarrell Miller debacle for their June 1st fight. That fight is now off due to Miller’s failed drug test for banned substance earlier this week.

Johns explains why the American Hunter seems to be the good fit to step in on six weeks notice.

Finally, Ron Bartholomew of TouchVodka.com is also on the podcast giving an opinion prediction on the Crawford-Khan pay-per-view main event and the implications of it afterwards. Plus, he has new news on one of their sponsored products for the podcast,  Touch Vodka’s,  new Pink Edition.

Catch all of the insight, analysis and predictions that are part of the Big Fight Weekend podcast right here: