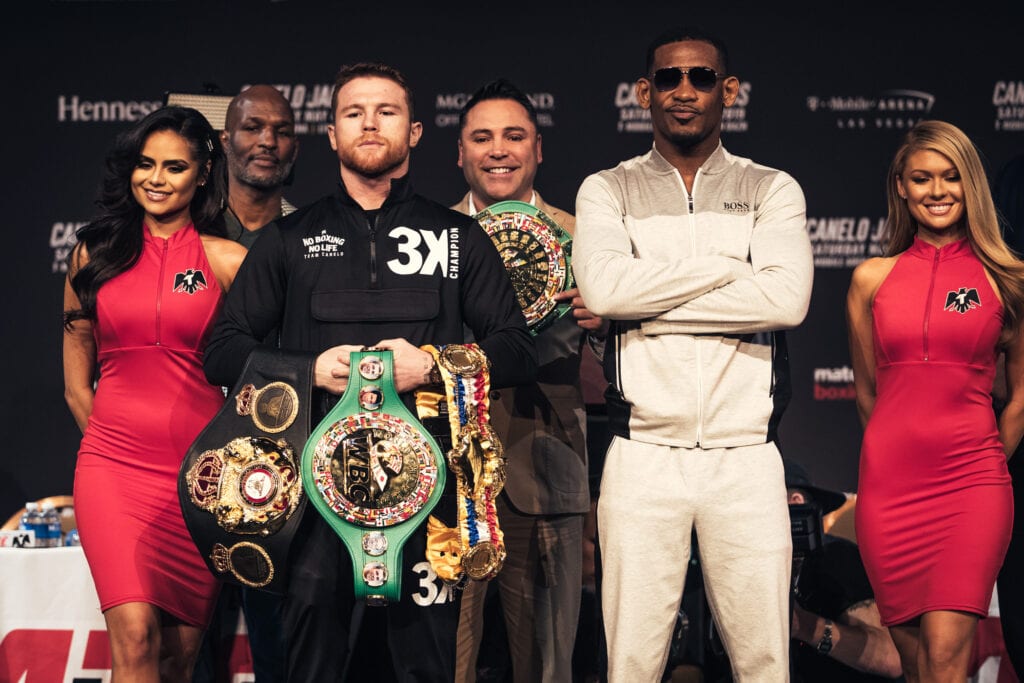 It is the latest “much-hyped fight” of 2019, it’s a battle for the Undisputed World Middleweight Championship Saturday night in Las Vegas as Saul “Canelo” Alvarez defends the his belts against IBF champion, Daniel Jacobs.

And, this scheduled 12-rounder is the main subject of our brand new “Big Fight Weekend” podcast just having been released Friday afternoon.

Alvarez comes in at 51 – 1 – 2 with 35 knockouts and when last he saw him, he dispatched England’s Rocky Fielding in just under three rounds last December at Madison Square Garden in New York. Alvarez had previously fought two hotly-contested 12-round fights with Gennady Golovkin both ending in controversial decisions. The first in September of 2016, was scored a draw and allowed Golovkin to retain his belts.

The rematch one year later saw Golovkin seemingly get the better of Alvarez, yet Canelo was given the majority 12 round decision that night and captured three of the Middleweight championships.

As for Jacobs, he comes into this fight with a 35-2 record with 25 KOs. He won the vacant IBF belt last October in a 12-round decision over Serhiy Derevianchenko in New York. Jacob’s had previously suffered his 2nd career loss at the hands of “Triple G” in March of 2017, as Golovkin knocked him down and eventually, outfought him to a unanimous decision.

Guests on the podcast include: DAZN commentator and former fighter Sergio “the Latin Snake” Mora, who gives great insight and analysis on this matchup. Mora knows Jacob’s all too well, having fought him twice, losing both times by technical knockout, in 2015 and 16.

Mora also discusses the significance of this fight outside of just boxing and whether, it needs to be a spectacular night to attract some of the casual sports fans back to the sport?

Next on the podcast is David Payne of boxingwriter.co.uk. Payne gives his analysis and thoughts into the Canelo – Jacobs matchup and has opinions on Anthony Joshua’s U.S. debut coming up June 1st. Earlier this week, Joshua’s new last-minute replacement opponent, Anthony Ruiz of California, was named.

Finally, the one and only, Marquis Johns of Bigfightweekend.com closes out the podcast with his analysis and prediction on Canelo – Jacobs. Johns also has more on Ruiz being the matchup for Joshua coming up in June.

And finally, T.J. and Marquis talk about three tremendous historical fights that took place either earlier this week or this weekend in the 2000s in lighter weight class boxing lore.

We look forward to seeing, if there will be an exciting action-packed contest in Las Vegas and we’re previewing it now is part of the “Big Fight Weekend” podcast.