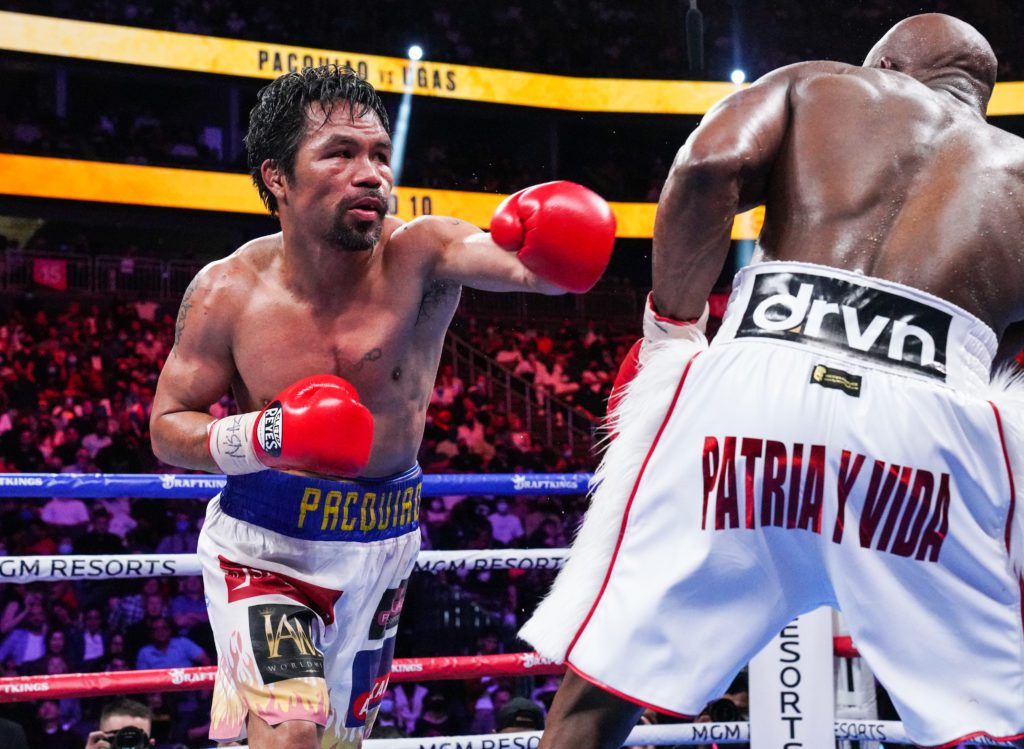 With Pacquiao Likely Presidential Defeat Will He Return To Ring?

On Monday, the Philippines held its national election day with boxing superstar and future hall-of-famer Manny Pacquiao on the ballot running for the country’s presidency. However with the polls now closed on Monday night there, it appears Pacquiao’s bid for the highest office in the island country will not succeed. So, the natural follow-up quiestion is: without having attained his political goal, will Pacquiao now attempt a boxing come back later in 2022?

First the particulars on the election: the former senate representative Pacquiao officially entered the presidential race when he retired after his loss last August to Yordeis Ugas by 12-round decision. Pacquiao prominently announced on video that he would walk away from the sport after a career that saw him win world championships in eight different divisions.

However, the very competitive presidential election appears to have been won by the son of the former dictator of the Philippines Ferdinand Marcos, Jr. Polling data in recent days throughout the country showed Marcos more than double digits ahead of any other candidate. That included his primary challenger in the race and the country’s current female vice president, Leni Robredo.

Pacquiao was polling a distant third along with several other less prominent candidates that were hoping to gain some traction, but never did. Pacquiao’s campaign proclaimed last week that the polling data was off, because a lot of his support would come from poorer areas of the Philippines that don’t participate in the polling.

It is believed that the election results may be counted into early Tuesday or longer because of massive turnout, especially on Monday afternoon. Marcos Jr. who is 64 years old, has repeatedly pledged to the Filipino people to be more transparent on government dealings with finances and poverty. This after his father and famous mother Imelda, virtually bankrupted the country while making themselves into a multi-millionaires starting in the 1970s.

Robredo is a former human rights lawyer and has been immensely popular as vice president. There were political factions that wanted Pacquiao to bow out of the race and throw his support behind her to give her the best opportunity to defeat Marcos Jr. However, that did not happen.

So, now, if the likely result is that Pacquiao has lost in his presidential bid, speculation will intensify that he may try at 43 years of age to step back into the boxing ring.

One logical bout would be against unified welterweight champion Errol Spence. Spence and Pacquiao were to have fought last August before Spence suffered an eye injury that required surgery. That allowed the Cuban Ugas step into his place on about 10 days notice and upset Pacquiao claiming the WBA world championship. Since that time, Spence’s eye has healed and with Pacquiao’s retirement he beat Ugas convincing decision in April in Arlington Texas.

The Spence-Pacquiao proposed fight in Las Vegas would be a mega pay-per-view and the biggest named opponent that Spence his ever had on his resume’.

But, all of that is provided that “Pac Man” wants to try to fight, again.

After all, Pacquiao has walked away with tens of millions of dollars in career earnings and a career that saw him defeat the likes of Marco Antonio Barerra, Erik Morrales, Ricky Hatton, Oscar De La Hoya, and Miguel Cotto.

Still, now that the presidency of the Philippines didn’t materialize, he may be tempted to be back.