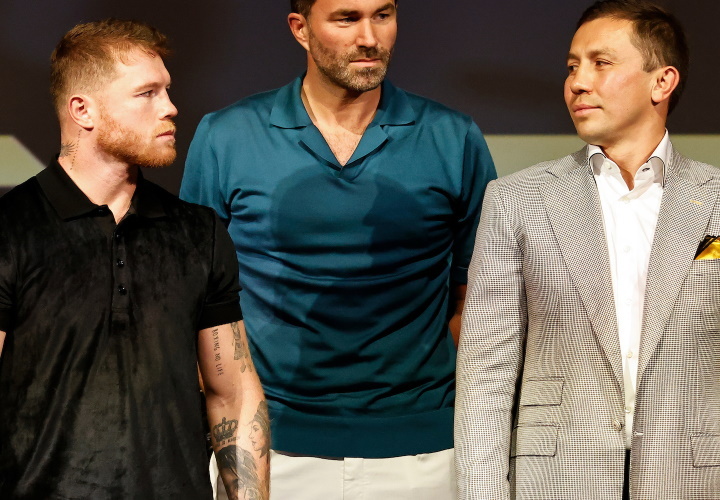 The battle in Las Vegas on September 17th is one of the premier fights for all of 2022,

From the DAZN official release,

“The full card for the long-anticipated trilogy showdown featuring world champions Saul ‘Canelo’ Alvarez and Gennadiy ‘GGG’ Golovkin on Saturday, September 17 is complete. Led by super-flyweight sensation Jesse Rodriguez in a co-main title battle against Israel Gonzalez, other thrilling matchups will fill an exciting night leading into the most anticipated fight of the year.

The event will be broadcast live from the T-Mobile Arena in Las Vegas, Nevada on DAZN PPV in the U.S., Canada, UK, Ireland, Australia, and New Zealand as well as around the world on DAZN (excluding Mexico, Latin America, and Kazakhstan)​ and is in partnership with Matchroom, Canelo Promotions and GGG Promotions.

The Canelo vs. GGG III full card will include:

In the co-main, Jesse ‘Bam’ Rodriguez defending his WBC World Super-Flyweight title and looking to strengthen his fighter of the year claims against Israel Gonzalez, the Mexican challenger who is ready to lay it all on the line.
Ali Akhmedov and Gabriel Rosado clashing for the IBF North American Super-Middleweight title – the big-hitting 27-year-old Akhmedov’s third fight on a card topped by his fellow countryman Golovkin, in a clash that is a must-win for 36-year-old Rosado.
Austin ‘Ammo’ Williams taking on Kieron Conway for the vacant WBA International Middleweight title.
Diego Pacheco fighting for his first pro belt in his second battle over ten rounds when he meets Enrique Collazo, the 2012 Olympian and six-time Puerto Rican National champion.
Marc Castro appearing on his fifth Canelo undercard since making his debut in December 2020, this time against Kevin Montiel Mendoza in his first bout over eight rounds.
Aaron ‘The Alien King’ Aponte mixing it up against unbeaten Mexican prospect Fernando Molina.
Anthony Herrera getting the chance to bounce back to winning ways as he takes on Delvin McKinley.

It all leads into the third installment of the classic modern rivalry between Canelo and Golovkin, with the Mexican king putting his undisputed Super-Middleweight crown on the line against Kazakhstan’s reigning WBA and IBF Middleweight ruler in the most anticipated match up of 2022.

It’s interesting on two fronts that DAZN is still charging their current U.S. subscribers $65 additional for the PPV, while non-subscribers have to pay $85. Also, Alvarez has the leverage to demand a separate PPV deal specifically for his massive following in Mexico that won’t be streamed by DAZN there.

Canelo-GGG is expected to be the most lucrative bout in terms of live gate and PPV revenue, etc. of 2022 and potentially in the past few years.