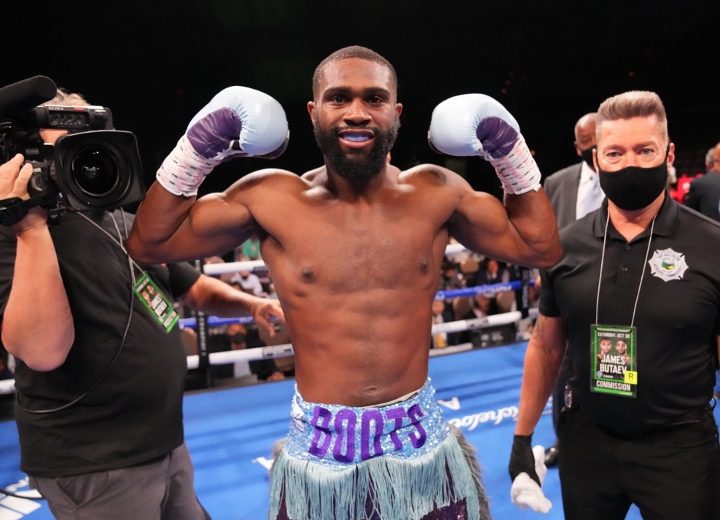 Where Does Ennis Travel From Here?

Jaron “Boots” Ennis spent all of one round Saturday night in Las Vegas to stop Thomas Dulrome and the whole world wants to know the simple question.

Where does Boots travel from here and who’s next?

Keith Idec of Boxingscene caught up with Ennis post-fight Saturday and didn’t forget to mention Radzhab Butaev as a possibility.

“Hopefully,” Jaron Ennis replied when asked about boxing Butaev next in a report to Boxingscene. “We’ll take that in a heartbeat – anywhere, any time.”

Butaev in the fight right after Ennis’s became the new WBA “Regular” champion by defeating Jamal James in nine rounds to close out the Showtime telecast.

Ennis noted after his contest that he stayed after his fight to see what Buatev was doing.

“Yeah, I watched a little bit of it,” Ennis said. “Typical, you know, fighter that comes straightforward. Tailor-made for my style. But good fighter. But it looked like Jamal James was drained and couldn’t really do nothing. So, who knows? He a good fighter, but it’s levels. I’m on a whole different level right now. And they know how I’m comin’.”

Buatev-Ennis would be interesting but the path for Buatev is the winner of Yordenis Ugas and Eimantas Stanionis in a bout that the WBA ordered to eliminate some of their titles. While that fight isn’t likely, Ennis continued post-fight the call out of the top of the division still. No shock to anyone who has been following Ennis.

“I’ve been ready for a world title two years ago. I want the top guys: Errol Spence Jr., Yordenis Ugas, Shawn Porter, Terence Crawford, Keith Thurman. I’m ranked No. 3 in the IBF, so Errol Spence Jr. is who I want next,” Ennis said.

The top names at 147 are running out of time as he is slowly moving his way up the hard way thru the rankings and it’s only a matter of time before he becomes the unavoidable mandatory challenger for the current title holders at welterweight.