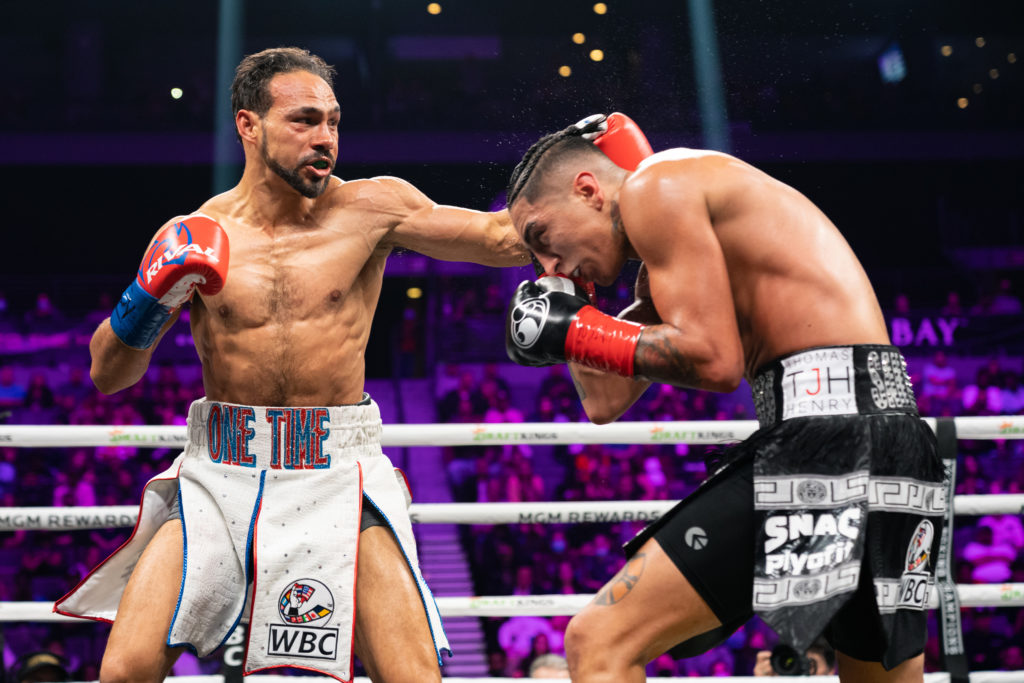 What’s Next For Keith Thurman?

Late Saturday night in Las Vegas, former WBA World Welterweight champ Keith Thurman sat victorious and reflecting on his return to the ring after a 2 1/2 year layoff. And, more importantly, entertaining what might come next?

First, Thurman defeated former Jr. Welterweight contender Mario Barrios with an impressive showing of aggressiveness,  hand speed and power for a 12 round unanimous decision win. The bout headlined a Premier Boxing Champions/Fox Sports PPV in Las Vegas and represented the first time “One Time” had been in the ring since his July 2019 title loss to the legend, Manny Pacquiao.

Thurman met with the media at the Mandalay Bay and made clear he believes that a larger battle on PPV with the likes of champions Errol Spence or Terence Crawford is in his immediate future,

“I know my skills, my talent. I know that I’m world class. And I just wanted to show that. Barrios was definitely a game fighter. Him and his team prepared very well for this fight. They were very poised. Way more poised than I thought the young fighter was going to be,” Thurman said.

When asked about the possibility of fighting, unbeaten WBO 147 lb. champ Terence Crawford next, Thurman added,

“The fact that he’s a free agent should make things a little bit better. Working with Bob (Arum) isn’t fun for a lot of fighters. At the end of the day, I’m not sure…. I’m one of the best fighters in the world. I wanna fight whoever they give me. I do want to fight champions….I want an opportunity to get a world title again. So, if that (fighting Crawford) is the best opportunity, I’ll take it.”

Thurman is now 30-1, 22 KOs and a fight with the 37-0 Crawford, who’s regarded as one of the top pound for pound fighters in the sport, would be intriguing. Crawford was most recently in the ring in November in a TKO win over former WBC champ, Shawn Porter. Porter is also a fighter that Thurman defeated earlier in his title run back in 2016.

And, the fact that Crawford is now free to negotiate another PPV or multi-fight deal with PBC, also helps the Thurman possibility.

Still, it’s not clear if Crawford even wants to remain at Welterweight or move up for a lucrative shot at the potential Undisputed Jr. Middleweight title winner between Jermell Charlo and Brian Castano, who rematch next month?

All we know for now, is that Thruman is back and in the mix for a bigger bout later this year.

And, that’s a good thing for the competitiveness of the sport.