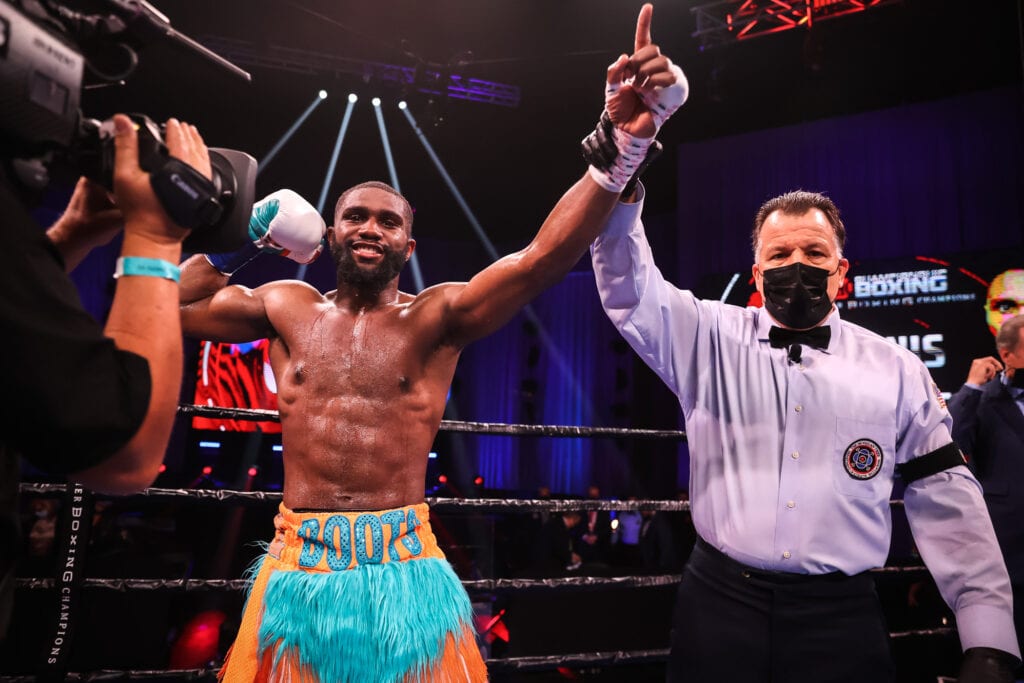 What’s Next For Boots Ennis?

Jaron “Boots” Ennis took the most significant test in his fight resume and came out of it with a sixth-round stoppage win over Sergey Lipinets Saturday night from the Mohegan Sun Casino Uncasville, Conn. The question now begins for the undefeated welterweight from Philadephia is who will be next up for him in the ring?

“I might have to become a mandatory to get the title fight. Until then, I’m going to keep working to fight the best fighters available to me,” Ennis said after the win Saturday night.

I posted on Twiter after the win that I’d like Ennis to face the winner of the Abel Ramos-Omar Figueroa contest airing on the Chris Arreola-Andy Ruiz Jr. pay-per-view card in May. Still, after sleeping on it, I think I have a better option for him if he goes the mandatory route.

The low-key news item that came out before the fights last weekend came from podcast guest and boxing scribe Steve Kim. Kim tweeted out that Kavaliauskas, Egis Klimas, mentioned that ‘Mean Machine’ is now a promotional free agent as Top Rank released him. Boots talked about getting at Terence Crawford in recent conversations aked about who he’d like to face and faced Kavaliauskas back to a stoppage win back in December 2019.

spoke to manager Egis Klimas, he mentioned that 'Mean Machine' Kavaliauskas is now a promotional free agent as Top Rank released him. Still a very serviceable welterweight that can make for some good fights… #boxing

As of this writing, Ennis is a Top 15 welterweight and will shoot up the ranks following this win. If he is going the WBO route to challenge Crawford, beating Kavaliauskas would help in the progress. It will make me stand down my thought of Ramos-Figueroa as the WBA is racking up more champions than challengers at this point. No “business of boxing” red tape for Kavaliauskas makes that matchup even easier.

“I’ll always be hard on myself when I look back at my performance. My goal is to keep getting better, sharper, faster, and stronger so I can become world champion.” Ennis said.“As long as I keep fighting top guys, I’m happy. I feel like I will be world champion by the end of this year or the beginning of next year. Patience is the key, though.

That patience will pay off when that title shot eventually comes for Ennis.