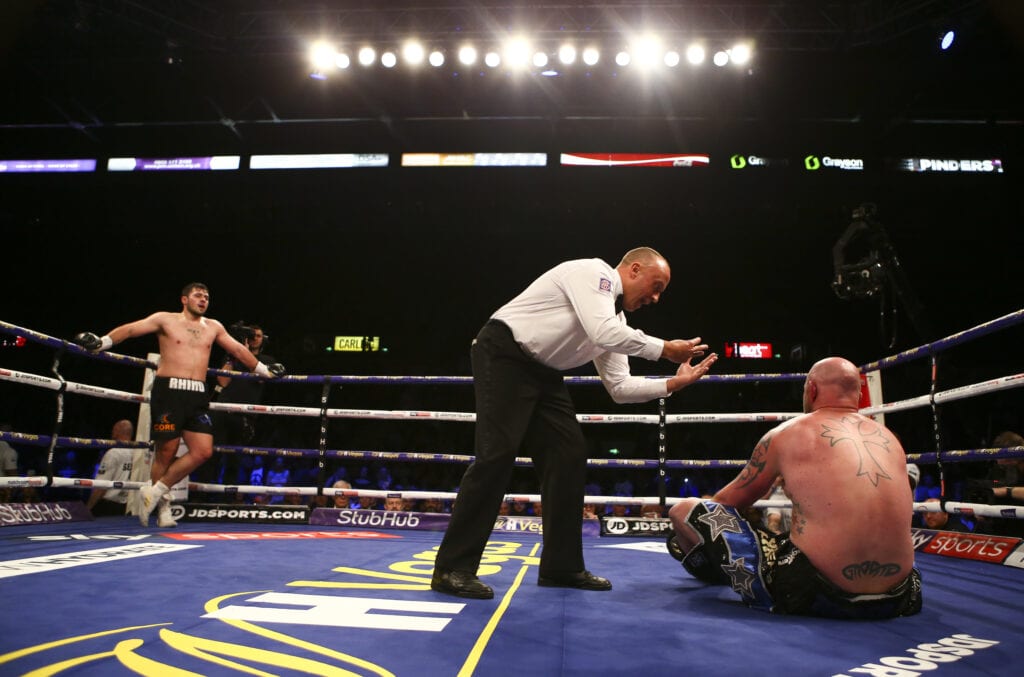 Controversy continues to surround the legitimacy of a third round knockout Saturday night in a British heavyweight bout on the undercard of the main event won by Junior middleweight Kell Brook.

And, after two listless rounds where neither fighter did very much, suddenly Allen went on the attack in the first 10 seconds of round three. Then, he scored with a huge left hand on Darch and eventually, a wobbly Darch went down.

Darch is then seen on this video laying on his back with his arms outstretched, but seemingly still coherent, and eventually got up at the count of eight. However, a short time later a couple of more solid punches landed from Allen and Darch went down, again. Take a look at it all:

Intriguingly once again(now knowing the controversy), Darch laid on his back with his arms above his head before sitting up and motioning to referee John Latham that he was not going to continue. Darch was then counted out.

And, that’s where more than just curiosity took over about the ending of the fight and the round in which it happened.

As this item on World Boxing News.Net points out, there were irregularities in the legal live betting for the fight. This included, just minutes before the fight began that the online gaming service “Sky Bet” stopped all bets from being taken on the “prop bet” of a David Allen knockout for the third round of the fight.

This was due to significant money coming in at a rapid pace on that specific ending in this seemingly average non – title fight.

Further, a fight fan in Canada who does extensive research and social media posting on boxing betting and line movements, put out these specific numbers on how much more drastic the wagering was for an Allen third round KO, the odds movement for that round and the potential payout for a knockout in the third round:

In other words, there was a significant amount of money wagered on Dave Allen to win in round 3. https://t.co/QsnL8v70jw

Now, as Karas pointed out, because this wasn’t a significant fight, even for fans in the UK, some money on any specific outcome would cause a fluctuation in the betting line movement for a specific outcome or round. However, when you piece together the betting pattern, the first two boring rounds, and then the sudden “KO” in the round in question? There’s reason for more investigation.

Further adding to British boxing fans suspicions were the comments made by the play-by-play announcer on the Sky Sports Broadcast of the fight. He mentioned early in the first round on the video above of the well-known friendship between Allen and Darch. He then volunteered that the two fighters were together on Saturday morning sharing coffee before their fight Saturday night.

Now, on “face value,” that bit of info/meeting the morning of the fight is unusual, because you are with someone that you’re about to stand across the ring from later that night and try to punch, if not pummel. Therefore, most would agree both fighters shouldn’t be “coffee buds” on the morning that you’re planning to be in the ring together.

And, while an argument can be made that it was simply friendly meeting / conversation between two journeyman fighters, it looks a lot worse, when coupled with all of what we now know about the suspicions the outcome of fight and exactly, in the round it ended.

Allen is now 18-5-2 with 15 KOs after the victory. He had lost his previous fight by TKO to David Price last July and many wondered if he would retire?

Allen has not referred to the alleged “fixed outcome” on social media, despite tweeting on many subjects, including boxing, repeatedly for the last 48 hours.

For his part, Darch has responded on social media Saturday night and sarcastically hinted that if it was a “fix,” he should have been paid a lot more for the facial bruising and lacerations he suffered:

Fix?if so I want a bigger cut?twitter beauties x pic.twitter.com/FQc7Mo7JQP

However, it doesn’t help in Darch’s resume’ that he had been beaten by knockout or stoppage before Saturday in each of his previous six fights, including in November he was stopped by someone named Ellis Machin. If you believe in “fixed” fights, that’s the resume’ of the perfect type of “fall guy” to take a knockout loss.

Meanwhile, back to the boxing odds analyst, Karas, who further tweeted Sunday night that he now believes the fight was fixed and further, had learned that apparently sportsbooks and online sites in the U.K. and Europe were still not paying out for the Allen KO. Karras also used the words “currently under investigation.”

But, there is nothing official on Monday morning, as of yet, from the British boxing Board of Control, as to whether they are actually looking into the outcome of Saturday night’s fight and its legitimacy.

UPDATE: Approximately five minutes after our story went live and we promoted it socially, David Allen had this response to us on Twitter:

Allen is obviously welcoming an investigation “to put the matter to bed.”

Now, we wait to see what, if anything, will be done.