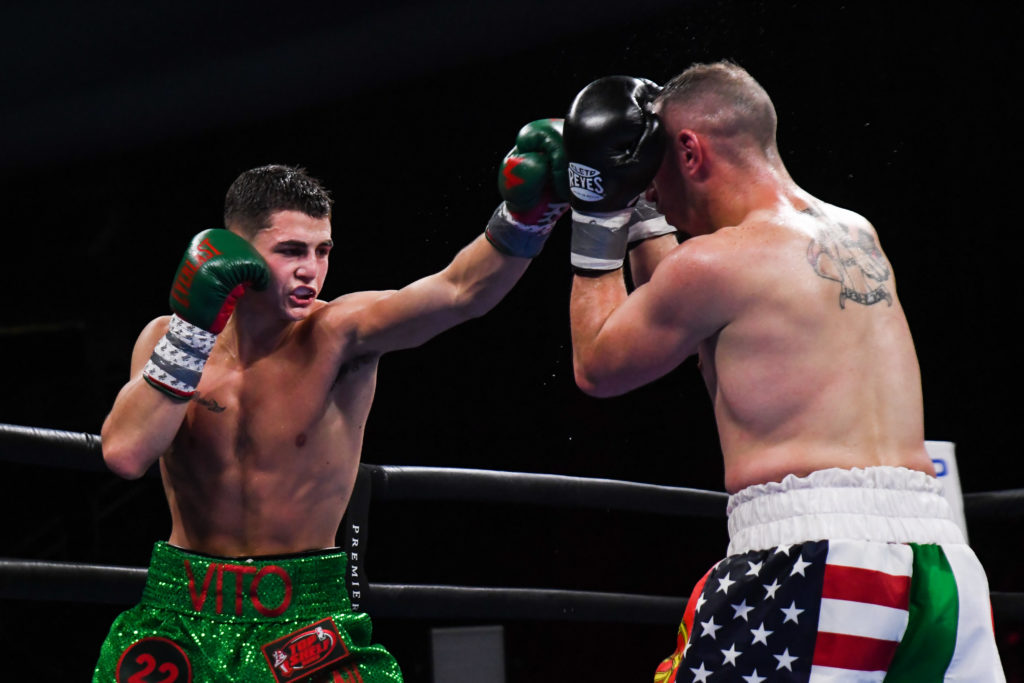 19 year old rising Welterweight prospect Vito Mielnicki wanted to deliver an impressive performance on Christmas night in front of his New Jersey fans and he did just that. Mielnicki headlined for a special “PBC on Fox” card on the holiday from the Prudential Center in Newark, NJ, and scored a 10th round TKO  over veteran Nick DeLomba

Mielnicki was in complete control landing more frequently and the harder shots, as he improved to 10-1 with the stoppage,

Clad in green trunks for Christmas, Mielnicki used a hard jab effectively throughout the bout that caused DeLomba to have swelling under both eyes starting in the 3rd round. In that frame, Mielnicki put together combos to the body and then, to the head that had DeLomba on the ropes and in some trouble. But, DeLomba, who dropped to 16-4 with the loss, proved to be tough and hang in to extend the bout.

Still, this one was never in doubt, as Mielnicki was busier and out-landed the opponent 154-44 at the time of the ending. Mielnicki rocked DeLomba halfway through the final round with a right, staggering him towards his own corner. The youngster scored a left uppercut as part of a five punch combo that wobbled DeLomba and his corner called the bout off at 1:49 of the 10th.

The win for Mielnicki was his second straight after a surprising eight round decision loss to James Martin in Los Angeles without fans in April of this year. Mielnicki will need to step up in competition in the new year and Saturday night was solid start.

Earlier in the night in the co-feature, Michigan Middleweight prospect Joey Spencer scored a 5th round KO over veteran Limberth Ponce to improve to 14-0. Spencer landed some solid shots, almost one at a time for the early part of the bout, but things ended quickly in round five. That’s, when he rocked Ponce with a left-right and then dropped him with a follow up right hand.

The referee waved the bout off at just 1:24 of the round for the 21 year old Spencer’s 10th KO, which was the first time the 18-5 Ponce had ever been stopped. Spencer will now also look for a bigger fight in the first part of 2022.