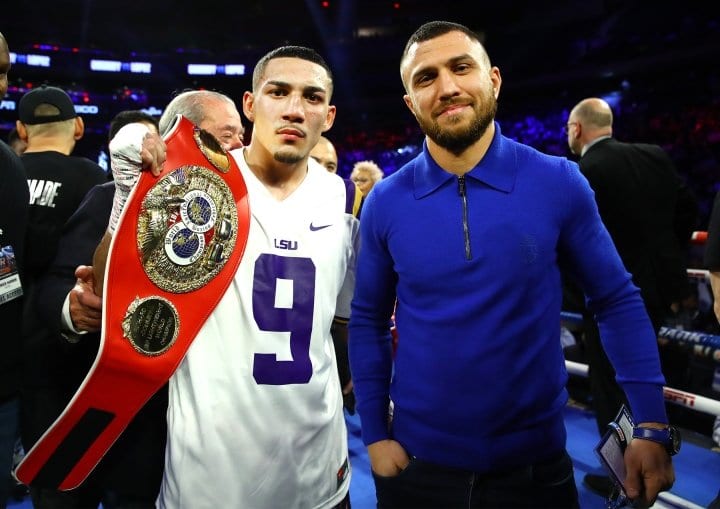 A win for fight fans and everyone involved on Wednesday evening, as Top Rank Boxing and the representatives for Unified Lightweight Champ, Vasiliy Lomachenko and IBF 135 lb. champ, Teofimo Lopez have agreed to a huge showdown coming in October.

ESPN’s Steve Kim had the news first that the rumored deal, which had been held up by Lopez demanding more money, is apparently now done with a date, a backup date and great optimism:

I spoke to Teofimo Lopez, he's very excited and motivated by what has been said in regards to the negotiation. #boxing

The Unification battle has been in the works for over two months and a key was earlier this week when Lomachenko reportedly offered to take approximately $800,000 of his original, reported $3+ million purse and give it to Lopez.

Lomachenko 14-1, 10 KOs and Lopez 15-0, 12 KOs were originally supposed to fight on May 30th at Madison Square Garden before the Coronavirus outbreak shut down the sport in mid-March. Arum had been looking at Saturday night September 19th as a possible date and maybe with some socially distanced fans able to attend.

However, as we discussed on the most recent BFW podcast with Marquis Johns and TC Martin (who is in Vegas) with Covid cases on the rise in Nevada, that doesn’t seem likely to have fans:

As for Lomachenko getting the bigger financial guarantee, no one can argue that Lopez is an up and comer being featured by Top Rank/ESPN. But, by the same token, no one can dispute that Lomachenko has been in the ring with far better caliber competition in many more fights.

The Ukranian former Olympic Gold Medalist Lomachenko’s last bout was August 31st when he scored an impressive, easy 12 round unanimous decision win over England’s Luke Campbell to become Unified 135 lb. champ. In three of his four previous fights he defeated Jose Pedraza, Jorge Linares, and Gulliermo Rigondeaux, all of whom were previous World Title holders.

One other great update from fight fans is that depending on which date is confirmed, October 17th or the back up of the 24th, the fight will be offered on ESPN and not their + app or Pay per View.  Lopez defeated Commey on ESPN regular cable, but Lomachenko has headlined twice before on PPV and there was belief that’s where this fight would land.

Instead. Compromise and apparently a deal.

Rob Brant back in action in ‘The Bubble’
Benavídez focused to take on Angulo Saturday
Advertisement
To Top
We use cookies to ensure that we give you the best experience on our website. If you continue to use this site we will assume that you are happy with it.OkPrivacy policy