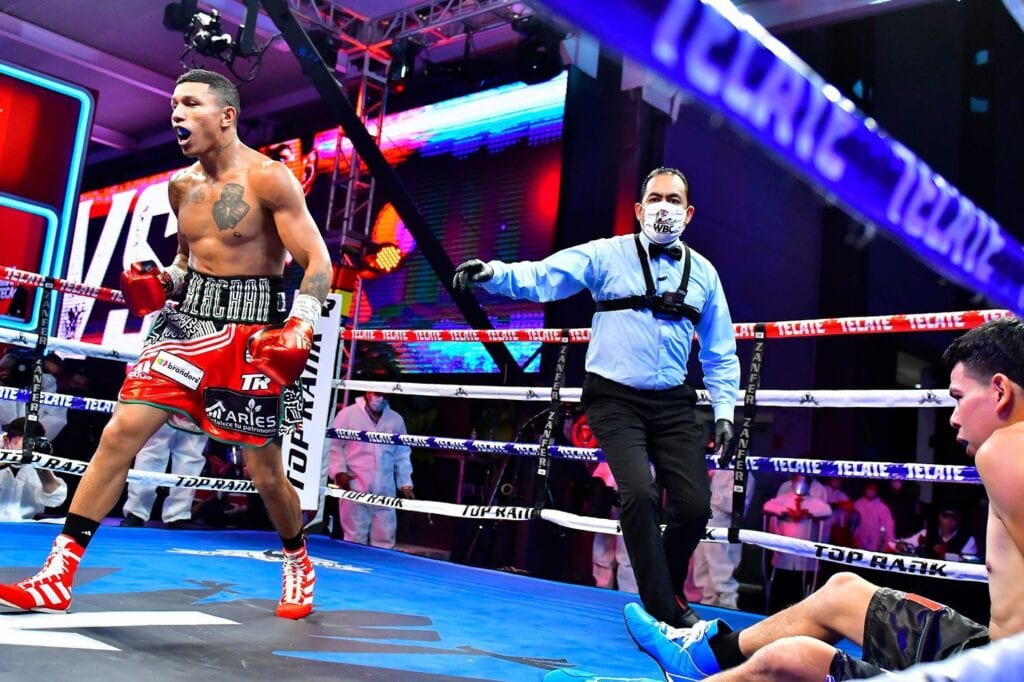 Berchelt (38-1, 34 KOs) knocked down Valenzuela (21-14-4, 16 KOs) in the opening round, then continued with a body-head assault until a barrage of rights and left hooks upstairs prompted referee Cesar Castanon to stop the fight at 1:13 of in the sixth round in what was the textbook definition of “one-way traffic.”

Another brutal KO in the bank. @AlacranBerchelt called fight in the 6th, after a savage performance 😤⤵️#BercheltValenzuela pic.twitter.com/SLxzlPSVdu

It was a furious, sustained offensive output for Berchelt, who landed 201 of 321 power blows (62.6 percent connect rate). Valenzuela landed only 37 of 305 total punches. The one positive for Valenzuela  in this contest of non-title action was the fact he was still upright during this entire onslaught before the referee waived this on over.

“Now what follows is the expected fight against Oscar Valdez,” Berchelt said. “Every fan wants to see that fight, and we are ready for that war.

“I felt great, but the altitude Mexico City hit me a little bit. It is not easy to fight in Mexico City, but thank God we got the victory. Eleazar is a tough fighter. He endured everything I threw at him. He gained my respect.  My experience as world champion pushed me forward.”

For Berchelt and this fight, this was another day at the office and had the look, smell, and an expected result of this tune-up fight. What happens for him here is what still seems to be the path with a contest for Oscar Valdez, who is the No. 1 contender for his WBC belt back at 130.

We’ve written here and thought it was interesting that the broadcast mentioned in glancing that Jamel Herring is also a possibility in a unification bout. Boxing analyst Mark Kreigel mentioned that current featherweight champion Shakur Steveson is a name to be tossed in the mix.

We’ll wait and see who it will be next as Valdez himself in action on July 21st against an opponent to be named as of this writing.