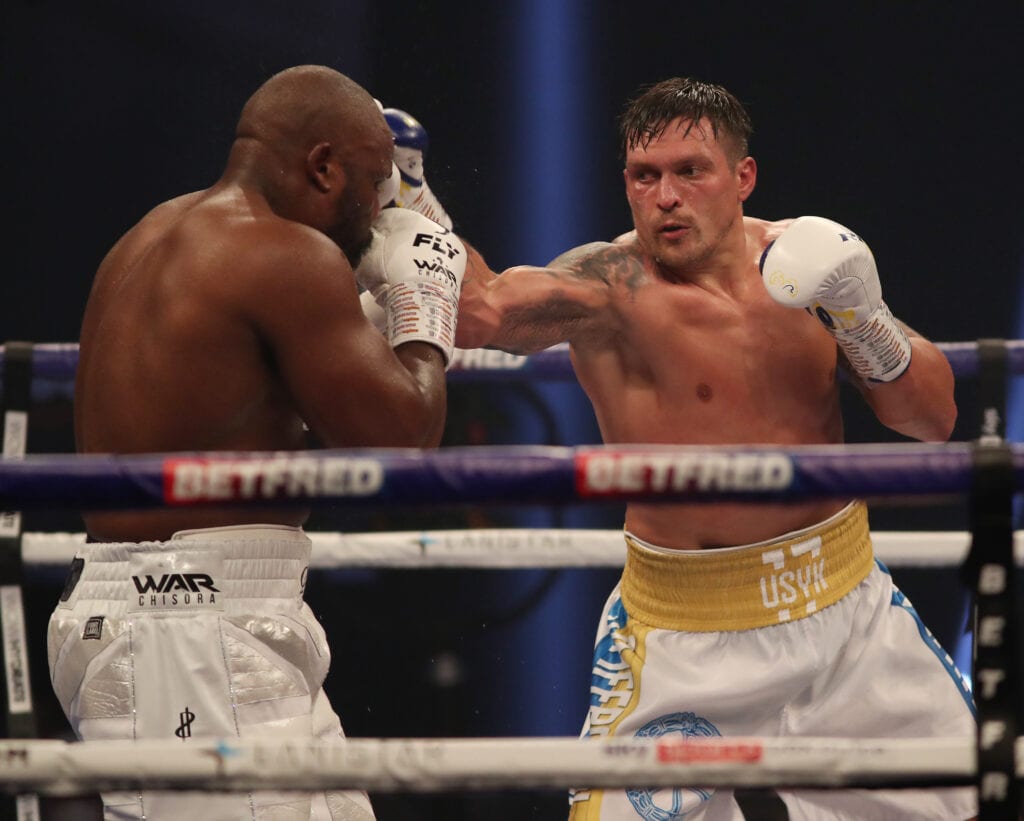 Closing out the SSE Arena in Wembley show in London had a Heavyweight battle between Oleksandr Usyk and Dereck Chisora, with Usyk coming up victorious by unanimous decision Saturday night.

The build-up for this fight was a fun one, and the fight didn’t disappoint. The contest that closed out the Sky Sports pay-per-view broadcast and on the streaming service DAZN in the States had final scorecards of 117-112 and 115-133 x 2 for Usyk. Live scoring the fight I had it for Usyk 115-113.

Chisora started the opening bell being the aggressor against Usyk, looking to straight maul with him. It was clear in the ring that Chisora was a solid 40 pounds heavier than Usyk at the weigh-in Friday and was looking to use that this advantage. Towards the end of the second round, both fighting inside, and Chisora made Usyk very uncomfortable.

By the third round, Chisora looked to be telegraph punches and throwing wildly, and Usyk started to land more by staying out of reach of any counter Chisora had. Became the best round for Usyk at that point.

Usyk, by the fifth round, however, was able to pick off Chisora coming in and began starting to avoid the jab of Chisora slowly. Fun stat from Dan Canobbio from Compubox was that Usyk was known for throwing the most jabs in boxing. That was not the case in this one, especially in the first half of the fight.

Usyk throws 40 jabs per round, the most in all of boxing — but not tonight. He better starting pumping it (pause)

The test for Usyk in this one was if he can keep up with the rest of them in the land of the heavyweights. The footwork of Usyk kept him a well fleet of foot from Chisora as the fight grew on.  It also made it a point that Chisora wasn’t having as much success, as well as Usyk, to stick and move. Usyk was able to land several combinations to close out the seventh round, and it was looking like Chisora was slowly fading away at this point. Chisora spent a lot of energy in the first half of the fight and, in the seventh round, was playing catch up to Usyk, who was moving around all over and away from Chisora.

By the ninth round, Usyk looked to be pulling away in this one as it felt that Chisora was running out of steam. That changed slightly in the eleventh as he still kept pressing on and landing the same uncomfortable shots on Usyk wasn’t a fan of earlier in the fight.

Anthony Joshua was on hand for this contest’s main event, and as he is the mandatory challenger for his WBO title, well see how all of that falters out in 2021 unless Joshua vacates it.