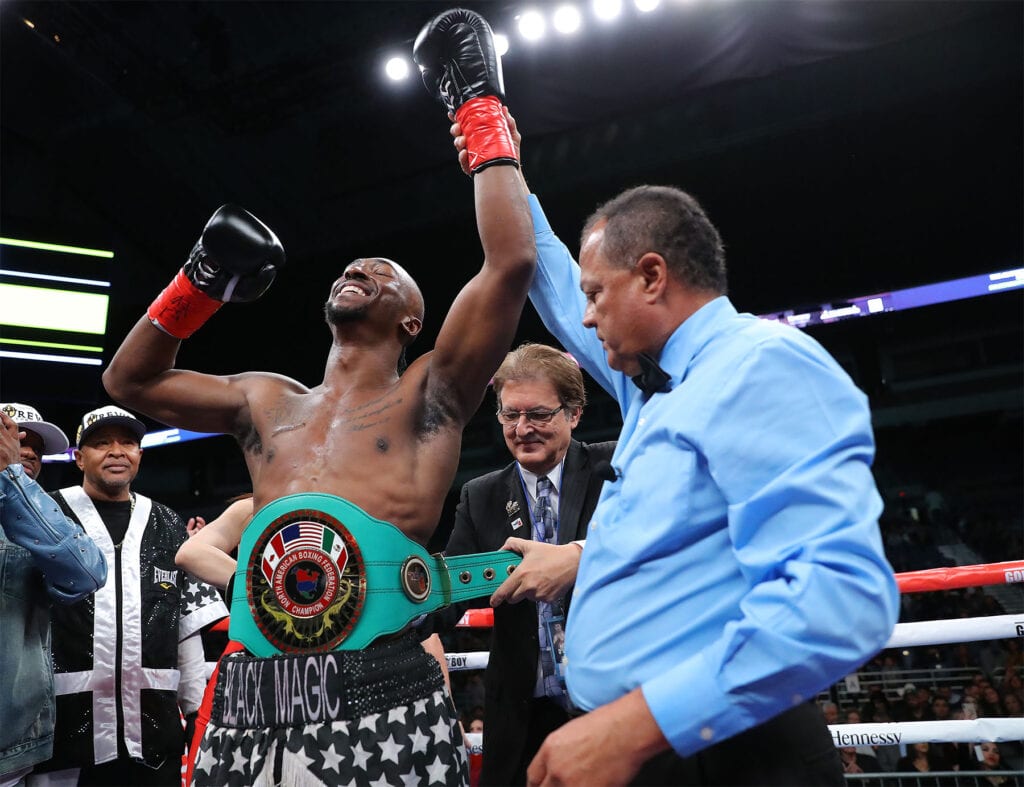 There are unconfirmed reports from Wednesday night that unbeaten, rising Junior Middleweight, Travell “Black Magic” Mazion, has been killed in a multi-vehicle car crash in Austin, Texas.

Mazion, who was just one week shy of his 25th birthday later in July, is unbeaten with a 17-0 record and last fought in January at the Alamodome in San Antonio, TX. That was a showcase fight on the undercard of the Jaime Munguia – Spike O’Sullivan, Golden Boy Promotions main event .

Mazion scored an emphatic KO of Fernando Castaneda in just :58 to capture the NABF 154 lb. title (photo above) that night.

Details are still emerging and authorities have not released the identities of the victims in a multi-vehicle accident that happened sometime Wednesday night in the Cedar Lake area of Austin.

However, here is the documentation from the Austin – Travis County Emergency Medical Services social media describing the location of the fatal accident and multiple individuals having to be extricated from their crashed vehicles.

Further confirmation came from a friend and a fellow fighter out of Austin named Joseph Sungia via a Facebook post in the middle of the night/ early Thursday morning:

Travell Mazion I was shocked to hear the news about what happened. I want to let you know that you impacted us with your…

Mazion recently gave a video chat interview to Golden Boy’s Jess Rosales in late May updating his fans on training and looking forward to a future fight, while the sport has been on hold due to the Covid-19 pandemic.

In that conversation, Mazion was eager to have a shot at WBO Jr. Middleweight Champion (and fellow Golden Boy promoted) Patrick Teixeira, potentially in late 2020 or early 2021.

?Catching up in Quarantine?@black_magic92 is calling out names and ready for the belts in the future.

Click the link to watch the full interview and find out who he's calling out ?

Mazion was also in the news two years ago, when Denver Broncos Super Bowl champ and former Texas A&M All-American defensive lineman, Von Miller, sued him in Los Angeles Superior Court. Miller detailed in the filing that he was seeking repayment of a $30,000 investment against future earnings from Mazion.

It’s unclear if the civil suit was ever resolved.

Mazion turned pro in 2013 and won all three of his fights in 2019, as his career continued on an upward trend.

Early, Thursday morning Mazion’s likeness and profile were taken off the Golden Boy Promotions website, which seems to be further confirmation of the horrible news.