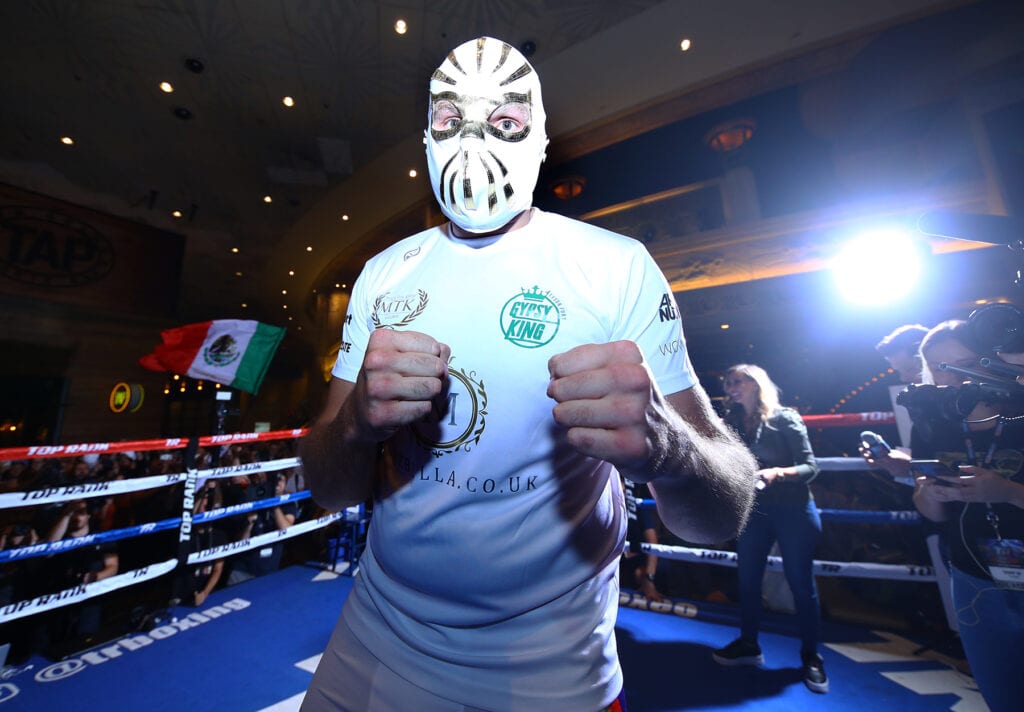 Lineal champion Tyson Fury stepped foot into the site of his controversial draw against WBC heavyweight champ Deontay Wilder but for a different reason.

Last night was the premiere episode of WWE Smackdown on its new network home FOX, and the star-studded event pulled out all the stops in the much-anticipated debut of wrestling back on over-the-air the network. FOX is no stranger to WWE as it used to for a brief period aired it’s Saturday Night’s Main Event program in 1992. The relaunch of Smackdown on the network is part of a five-year, billion-dollar deal to air the program.

Fury is currently set up to be in an angle with Braun Strowman. On the debut episode, Fury was sitting ringside when Stroman came up to where Fury was seated and said his catchphrase, “Do you want to get these hands?”, to the Gypsy King. Fury, of course, didn’t back down and stared Strowman down. This then cultivated when Stroman through his opponent Dolph Ziggler into the area of Fury, knocking him back off the guardrail. After the match was over with Stroman in the ring, Fury jumped the guardrail to try to attack Strowman and was promptly met by WWE security guards.

WWE is offering Fury a chance to speak on an appearance on its other program, Monday Night Raw, to help settle his differences with Stroman.

BREAKING: After he jumped the guardrail on Friday Night #SmackDown, WWE will offer @Tyson_Fury an open mic THIS MONDAY on #Raw. https://t.co/uQNRqtQj8i

I know all of this sounds silly cause it’s professional wrestling, and before you tell me it’s fake, I’m here to tell what the significance of this means in terms of boxing. Showbiz Daily reported that last night’s wrestling program was #1 in its time slot, with 3.9 million viewers watching. That is a lot of free exposure, and the much-mentioned “new eyeballs” on Fury will help his visibility and offer free publicity. Fury in his last boxing contest on ESPN+ against Otto Wallin was one that had a hard time getting people to buy a ticket. T.J Rives on this site reported the dismal numbers and the disappointment that the card was at the box office.

Even his future opponent Wilder mentioned it as well. “Now we know who sold all the pay-per-views [for the first fight]. This bro only sold 3,500 tickets. November 23rd will prove that even more,” Wilder stated.

Fury in a program with a wrestler on a FOX show they spent a lot of money on will boost the visibility of the rematch he will have against Wilder, which is slated to take place sometime in 2020. That fight also is expected to a joint pay-per-view venture between ESPN and FOX as well.

Fury will be the latest wrestler in an angle with a WWE wrestler and joins names such as Mike Tyson and Floyd Mayweather in doing so.

I hope he kept that Lucha mask, Fury may need it.

Shields Saturday women’s title defense called off
Split-T’s Baranchyk ,Ceballo in action at Madison Square Garden
Advertisement
To Top
We use cookies to ensure that we give you the best experience on our website. If you continue to use this site we will assume that you are happy with it.Ok