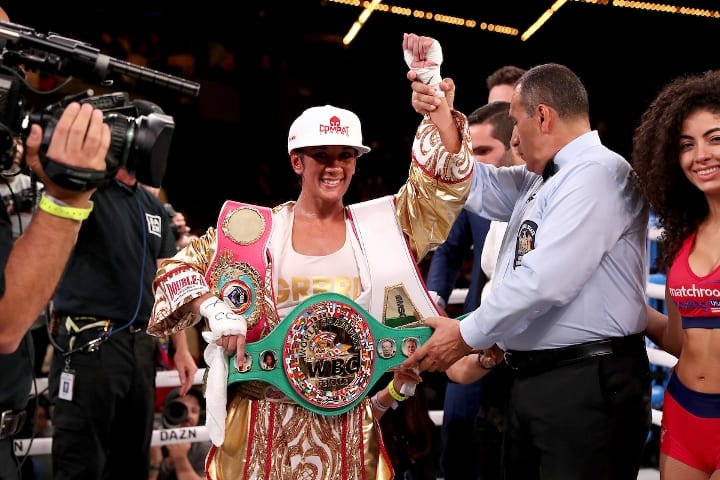 First, the Puerto Rican born- now New Yorker Serrano, 38-1-1, 28 KOs, had originally agreed to take on undefeated Irish Undisputed Lightweight World Champ Katie Taylor, 15-0, 6 KOs, on May 2nd in Manchester. This fight was to have been the co-feature for the Dillian Whyte-Alexander Povetkin Heavyweight contender showdown.

That fight was obviously postponed due to the Covid-19 pandemic that shut the sport down in mid-March.

The original proposed rescheduled date was Saturday July 4th, but that was also scuttled over a month ago, when Hearn began to plan to have fights outdoors in the backyard of the Matchroom Boxing headquarters in Essex, England.

Then, Matchroom and Sky Sports made the official announcement Friday of the four Fight Card series that will come in in August. The Whyte-Povetkin fight is the final main event at the end of the month and Taylor – Serrano is supposed to be the co-feature.

However, Friday’s promotion only showed and mentioned Katie Taylor and not an opponent. So, that was the first sign of trouble about any problem with Serrano agreeing to the new date, etc.

Now, Serano confirmed it herself with this social media post,

Yes I signed 4 contracts to fight @KatieTaylor & despite what lies @EddieHearn wants to say he offered us a purse deduction & a change of location in addition to yet another date May 2nd, July 4th now August 22nd my team will handle this. I’m Not a Toy I’m DONE WITH THE GAMES!

Hearn responded minutes later with his own version of the contract agreement and the reschedule,

Your promoter will confirm that exactly one week ago today we confirmed in writing the new date and that you would be paid the full amount that was in your contract. Yes there were two date changes due to a slight global pandemic. You have 8 weeks no excuses!

Very interestingly, Serrano took it a step further a few minutes later and actually accused her promoter, Lou Dibella of Dibella Entertainment of having agreed to the alleged salary reduction without her permission,

I just read that @loudibella & @EddieHearn Hearns make deals on my behalf without speaking to me or my Manager. Not sure this is even Legal. You guys are discussing me you know!
I respect my manager but I’m going to have to defend myself on this one.

And, like two fighters exchanging blows in the middle of the ring, Hearn responded specifically that Serrano is not having her purse reduced and that she’s being given eight weeks to prepare to fight Taylor on August 22nd,

? no I didn’t say Lou accepted anything. We rescheduled the fight for August 22 as per our signed contract. Please read my previous tweets and the email and hopefully it’s clear.

Well, then DiBella decided to defend himself and offer his version and seemed to defend Serrano having every right to say “no” to the second re-scheduling of the fight,

If @eddiehearn is saying I accepted the fight on your behalf, he’s lying. There is no signed written agreement for August 22 in his backyard. There was never any agreement, oral or otherwise, for Aug. 22 at the @MatchroomBoxing plantation. NEVER!!!! https://t.co/OnbZmh4rJo

Hearn, Serrano and DiBella continued to have back and forth on Twitter about the legal aspects of the original deal (signed in March), the right to re-schedule it, and whether they were waiting for fans to be allowed to attend (for more revenue), etc.?

In the end, Hearn cited this communication/notification that Matchroom has the right to re-schedule and will pay Serrano her full purse,

And we have the right to reschedule under the contract as you know.

The bottom line is that Taylor is ready to fight in late August, but it looks, for now, that Serrano isn’t willing.

And, we’re left to watch “the insults and accusations fly” for all to see.