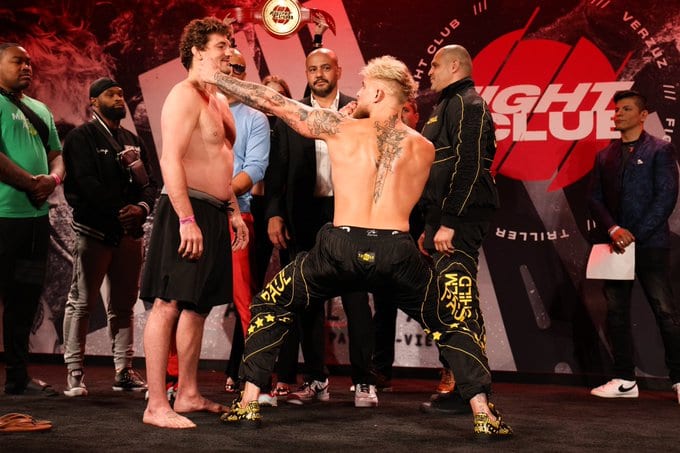 However, the curious question is will their next foray into boxing post Mike Tyson-Roy Jones exhibition, be more fights or farce?

It’s a question that we discussed with International Boxing Hall of Fame commentator Al Bernstein, who will be part of the Triller coverage, on our latest Big Fight Weekend Podcast, in advance of the bouts.

Hear more of his involvement and what he thinks of the Paul-Askren, main event, etc. by clicking below,

“It’s going to be a fascinating event. Recently, I had Snoop Dogg on my tv show/podcast…and I know that when you think of Snoop Dogg, you think of me,” Bernstein said with his quick sarcastic wit.

“We’re going to have some interesting people on the broadcast….It’s a mish-mash of all kinds of things and you have all the music….I looking forward to it. It’s going to be an intriguing night of boxing. I’ll do my part and see how it plays out.”

So, while Bernstein was saying the right things to us, there’s still some elements that make you question whether the “fights,” besides Prograis taking on veteran Ivan Redkach, will be mostly a waste or silliness?

An example was when Askren showed up at Mercedes Benz Stadium for the weigh-in with the “Dad-bod” and had the boxing internet howling Friday evening,

Askren officially weighed 191 lbs. for the Cruiserweight bout with Paul, but many are wondering if cardio/roadwork was any part of whatever preparation he did for tonight?

Paul flattened former NBA guard Nate Robinson on the Tyson-Jones undercard in November. And, a booming quick KO against a guy who doesn’t care, isn’t going to do much for fight fans.

Meantime, Prograis would love a rematch with Scotland’s Josh Taylor, who handed him his first loss in the World Boxing Super Series 140 lb. finale’ back in October 2019. It was a hotly contested 12 round win for Taylor which added Prograis’ WBA World Title to his IBF belt. Taylor is currently slated to fight Jose Ramirez for the Undisputed title in May.

Prograis blasted previously unbeaten Juan Heraldez with a third round KO in October to move to 25-1 and keep his plans of bigger paydays in tact.

So clearly, his fight will have the most interest for bigger fight fans.

Now, we find out how much of the rest is good, entertaining, worthwhile or…..dare we write, worth-less, along with it.