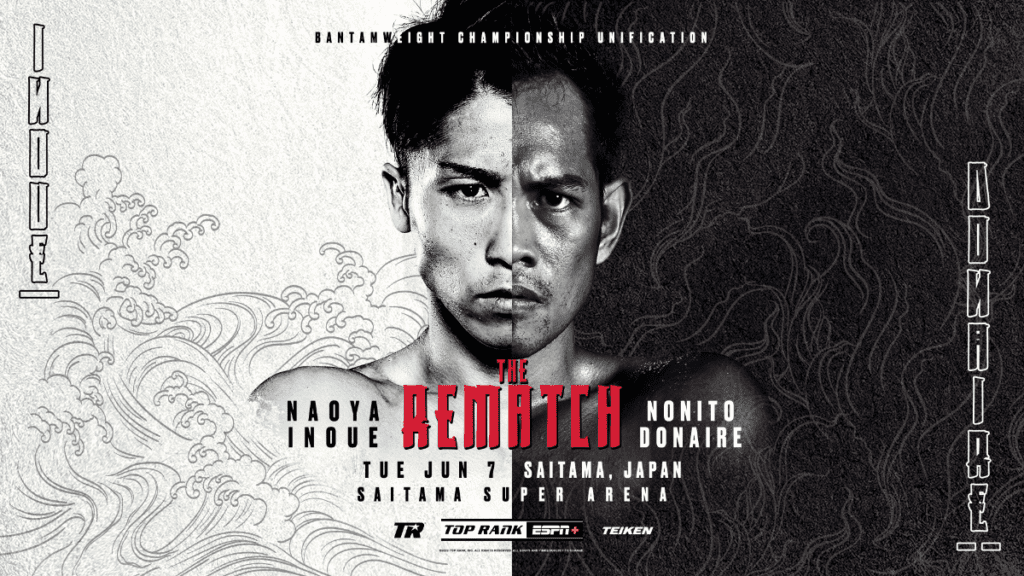 Top Rank Announces Inoue-Donaire Will Be On ESPN+

It’s one of the highly anticipated smaller weight bouts of 2022 and on Tuesday afternoon, Top Rank Boxing announced the unified bantamweight rematch between Naoya “The Monster” Inoue and Nonito “Filipino Flash” Donaire will be offered via ESPN+ in the USA.

The first meeting since their epic 2019 FOTY…

From the Top Rank realease,

“WBA/IBF bantamweight world champion Naoya “Monster” Inoue is 17-0 in world title fights and only once has been pushed to the brink.

WBC bantamweight world champion Nonito “The Filipino Flash” Donaire, the four-weight kingpin whose late-career renaissance cemented his status as one of boxing’s greatest lighter weight champions, has one more shot to stun the Japanese pound-for-pound icon.

Inoue-Donaire 2 and undercard bouts will stream live and exclusively in the U.S. on ESPN+ starting at 5 a.m. ET/2 a.m. PT.

“Naoya Inoue and Nonito Donaire’s first fight is among the greatest championship battles I’ve ever seen, and I am thrilled that American fight fans can watch the rematch on ESPN+,” said Top Rank chairman Bob Arum.

Inoue (22-0, 19 KOs), a three-weight world champion, won the WBC light flyweight title in April 2014 and ascended to pound-for-pound prominence with dominant runs at junior bantamweight and bantamweight. At one point, Inoue had a championship streak of seven consecutive knockouts against fighters who had never been stopped before. He joined the bantamweight ranks in May 2018 with a devastating first-round stoppage over Jamie McDonnell. One year later, he knocked out Emmanuel Rodriguez in two rounds to win the IBF world title. Since unifying the IBF and WBA belts versus Donaire, Inoue has knocked out Jason Moloney, Michael Dasmariñas, and Aran Dipaen.

Donaire (42-6, 28 KOs), a 39-year-old future Hall of Famer who won his first world title at flyweight in 2007, has experienced a career rebirth since moving down from featherweight following a decision defeat to Carl Frampton in 2018. He earned stoppage wins over Ryan Burnett and Stephon Young in his first two bantamweight contests before stepping up to face Inoue. Donaire before showed no ill effects from the 12-round shootout with Inoue, returning last May to upset Nordine Oubaali via fourth-round stoppage to win the WBC title. Donaire then defended that strap in December with a fourth-round knockout over the previously undefeated Reymart Gaballo.

In other streaming action on ESPN+:
Takuma Inoue (15-1, 3 KOs), the younger brother of Naoya and a former bantamweight world title challenger, will defend his WBO Asia Pacific junior featherweight strap in a 12-rounder versus Gakuya Furuhashi (28-8-2, 16 KOs). Inoue has won two straight since a decision loss to Nordine Oubaali for the WBC bantamweight world title, while Furuhashi is unbeaten in 11 fights dating back to 2016.

The time difference/early start time in the U.S. isn’t uncommon recently, this includes Gennady Golovkin having added the WBA Middleweight title to his IBF world championship with a TKO stoppage of Ryota Murata in Japan last month. That bout was streamed on DAZN in the U.S. with the main event happening similarly around 8 a.m. Saturday morning Eastern time.