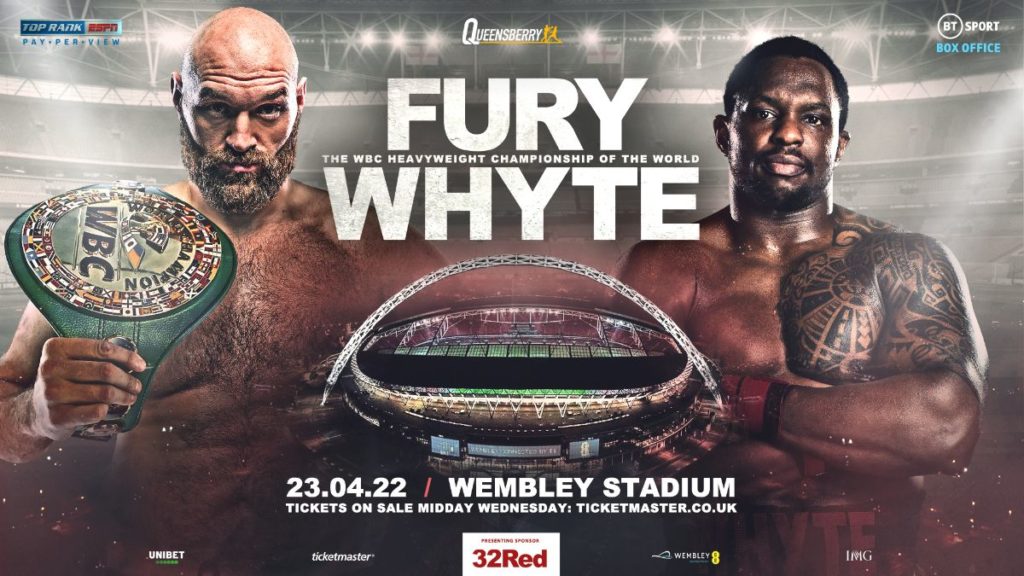 Top Rank Boxing and ESPN announced Tuesday their coverage plans for the upcoming WBC Heavyweight title showdown between Tyson Fury and Dillian Whyte at Wembley Stadium in London and confirmed their PPV price through their ESPN+ Service.

April 23, @trboxing presents a clash of the heavyweight titans: Fury vs. Whyte

From the promotion’s release:

Fury (31-0-1, 22 KOs) will defend his crown against WBC interim champion Whyte (28-2, 19 KOs) in front of a record 94,000 fans, the largest Wembley Stadium has ever hosted and the most fans to witness a boxing event in person since 1993. The Whyte showdown marks Fury’s first bout in London since February 2015.

It’s not specified in the release but it’s believed that the ESPN broadcasters will call the fight remotely with Tessitore (and maybe others) in the ESPN Bristol, CT, studios. This is what the network did for their February broadcast of the Josh Taylor-Jack Catterall Undisputed Jr. Welterweight showdown that took place in Glasgow, Scotland.

That bout had Tessitore in the ESPN studio with Bradley and Ward also joining them from his home studio on the analysis.

ESPN’s PPV price will be a stark $69.95 for the Saturday afternoon showing in America. Meanwhile, Queensberry Promotions and their television partner BT Sport in the U.K. will offer the PPV for significantly less at $24.95 in pounds or $32.45.

The fight has already sold over 95,000 tickets in advance to see Fury’s first ever title defense in Britain  and may end up breaking a U.K. outdoor attendance record for boxing.