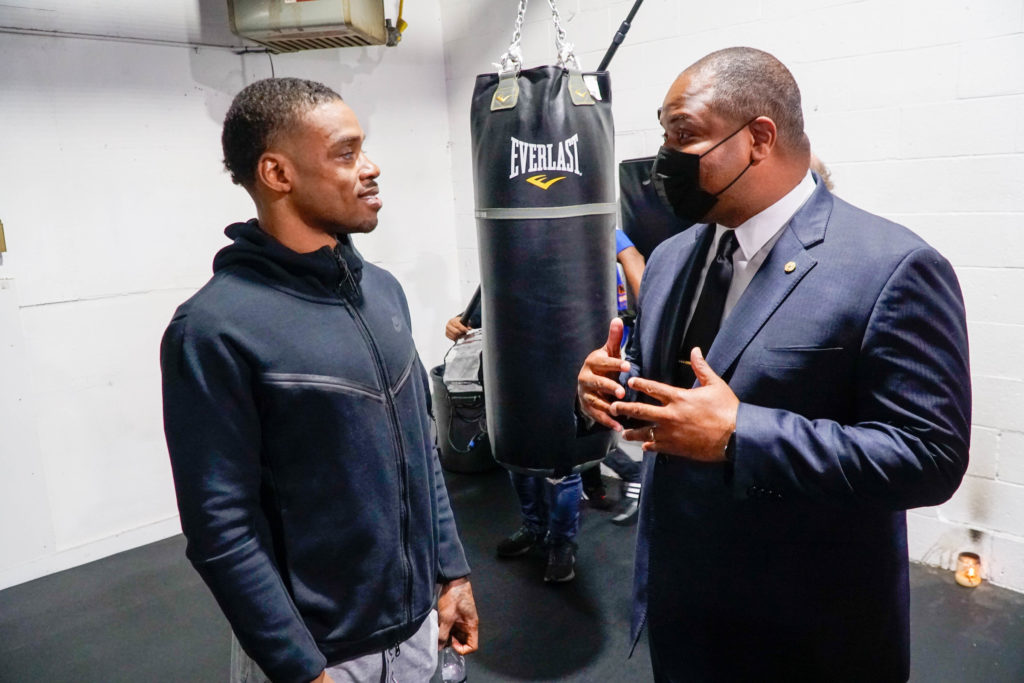 The build-up continues for Saturday night’s World Welterweight Unification showdown between IBF/WBC champ Errol Spence and WBA titleholder Yordenis Ugas. And, as part of Spence battling in his home area, the city of Dallas honored him Tuesday.

For the huge #SpenceUgas showdown on Saturday, I am officially proclaiming April 16, 2022, as “Errol ‘The Truth’ Spence, Jr. Day” in Dallas. Looking forward to watching @ErrolSpenceJr fight to unify titles with our city in his corner! #CityOfChampions 🥊 💯 pic.twitter.com/gWc2qF0V7W

“I don’t think I’ve made it a secret that I’m a big sports fan. I, of course, love cheering on our hometown teams and the athletes who represent our great city. And I love the camaraderie and fun that we can have together as sports fans. But more than that, I know that sports can serve to teach us about life. It shows us what it takes to be successful, and what it means to be great,” the Mayor said in a statement.

“And that’s part of why I love boxing. I love that being successful at the sport requires agility, power, speed, hustle, resilience, commitment and grace. And I absolutely love watching the champion, Errol Spence Jr….

“Errol, I can’t wait to see you go toe to toe this weekend with Yordenis Ugas not too far from here at AT&T Stadium. It’s going to be an incredible fight. And I want you to know that you’ll be fighting not just for yourself, and not just to unify titles, but for something that’s very important to me. You’ll be fighting for the 1.4 million people who call the city of Dallas home.

As we’ve written, there are plenty of subplots for Spence-Ugas. Not the least of which is: Spence, 27-0, 21 KOs, coming off eye surgery for a detached retina last August. Ugas took Spence’s place on less than two weeks notice for what had been Spence’s scheduled battle with future Hall of Famer Manny Pacquiao. And, he promptly dethroned “Pac Man” with a tremendous 12 round performance.

The Cuban defector Ugas is 27-4 and looking to pull another shocker Saturday night in the massive AT&T Stadium, which is actually not in Dallas, but rather Arlington, Texas.

In any event , Spence and Ugas meet in a Showtime PPV in one of the biggest fights boxing in the first half of 2022.

As for the proclamation Tuesday, Spence was humbled,

“Never in my wildest dreams did I think I’d get my own day from the great city of Dallas and to have everyone come out to support me. On April 16, I’m going to put on a great show. This day truly means a lot to me. I can do many great things, but only a few people are chosen to have their own day in their city. It’s amazing and I really appreciate that.

This is something that every April 16, my kids, my family, we can go out and have fun and just celebrate the day. It’s like a holiday. I appreciate everyone. I’m going to go out and put on an amazing performance. I thank Dallas for supporting me and I ask everyone to come out and support me. I will show you my gratitude on April 16.”

Clearly Spence is feeling honored, but it’s the win that he needs Saturday night to set into motion a possible mega-fight for the Undisputed titles with WBO champ and one of the pound-for-pound top fighters in the world, Terence Crawford.