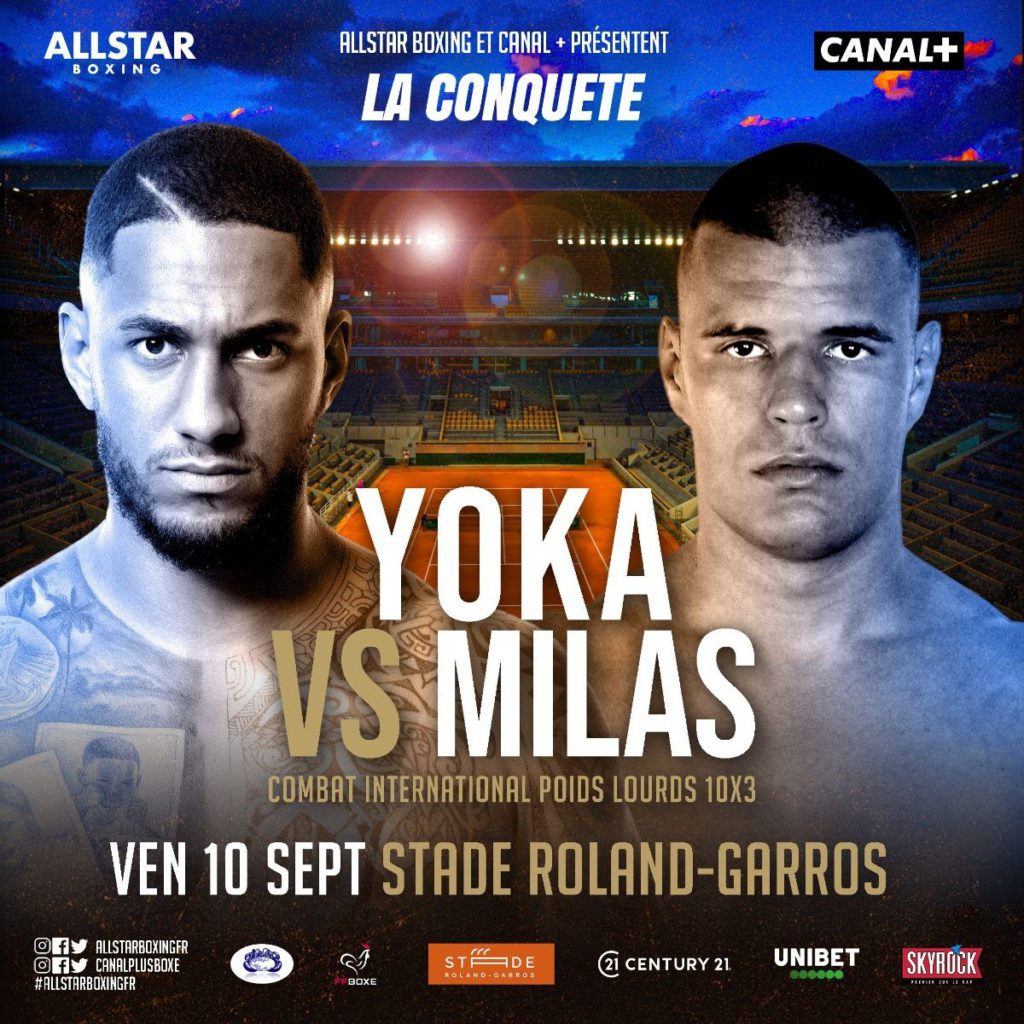 Heavyweight contender Tony Yoka, the Paris native who won Olympic gold for France in 2016, returns home for a historic night at the fights. Yoka will face fellow unbeaten Peter Milas in a 10-rounder this Friday, Sept. 10 at Roland Garros, site of the French Open. This marks the first boxing event to take place at the famed tennis venue since 1973.

Yoka-Milas will headline a scheduled three-fight card streaming live and exclusively in the United States on ESPN+ starting at 2:45 p.m. ET/11:45 a.m. PT. Top Rank-signed prospect Hugo “The Fresh Prince of Monaco” Micallef will make his pro debut on the card in a four-round welterweight bout against Ezequiel Gregores (2-2, 0 KOs). Highlights of Micallef’s fight will be shown on the stream.

Yoka (10-0, 8 KOs) turned pro in April 2017 and stepped up early with wins over the likes of Jonnie Rice, David Allen and former European champion Alexander Dimitrenko. He went 2-0 in 2020, including a first-round knockout over former world title challenger Johann Duhaupas. Yoka made his 2021 debut in March and knocked out Belgian native Joel Tambwe Djeko to pick up the European Union title. Milas (15-0, 11 KOs), from Split, Croatia, has fought most of his pro career in Germany. He’s picked up standout victories over durable spoiler Kevin “Kingpin” Johnson and former world title challenger Francesco Pianeta.

In other action streaming on ESPN+:

Souleymane Cissokho (13-0, 8 KOs), who earned a bronze medal for France at the 2016 Rio Olympics, will make the first defense of his WBA Intercontinental super welterweight strap against Russian veteran Ismail Iliev (13-2-1, 3 KOs). Cissokho won the belt in May with a split decision over Kieron Conway on the Canelo Alvarez-Billy Joe Saunders undercard.