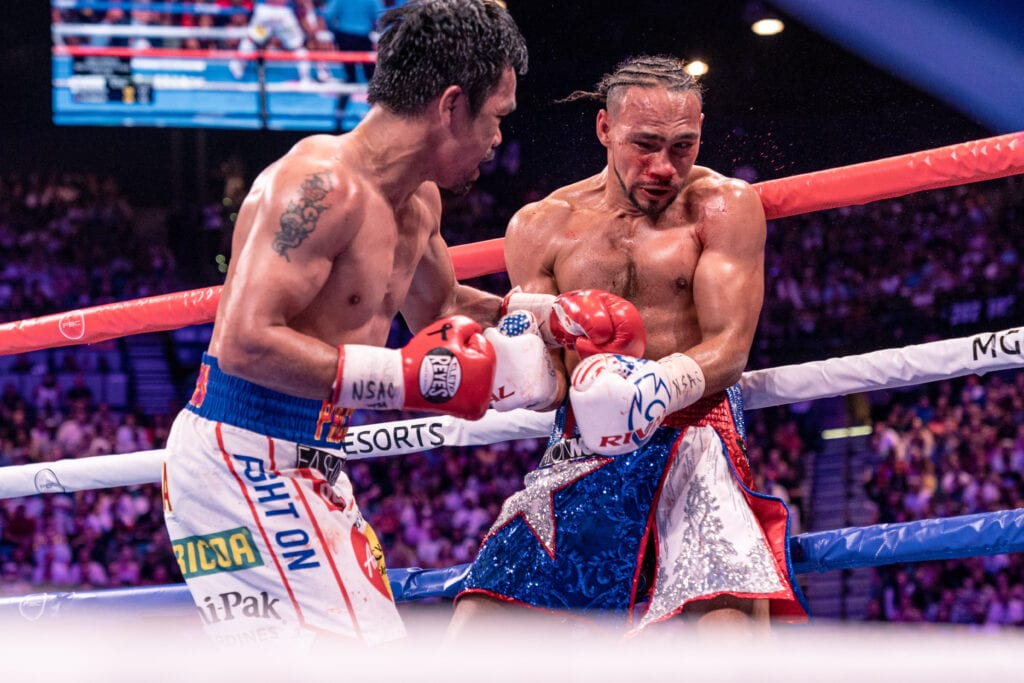 Thurman on Pacquiao defeat- “fought to best of my ability”

In his first at length public interview since his defeat in July, former WBA Welterweight champion Keith Thurman recapped and gave insight into his first career loss at the hands of Hall of Famer to be,, Manny Pacquiao.

Thurman appeared with host Kate Abdo on the “Inside PBC Boxing” show on Fox Sports 1 cable debuting Wednesday night. And, specifically they went back for several minutes recapping the entire night that Thurman took on the legendary Pacquiao at the MGM Grand Garden arena in Las Vegas in a scheduled 12-rounder:

Former Champ @keithfthurmanjr keeps it ? and breaks down his SD loss against Pacquiao. pic.twitter.com/97saDXwVTU

As you’re probably aware of by now, Pacquiao scored a 12 round split decision victory continuing his tremendous legacy and leaving Thurman left to explain how he was beaten by 40 year old fighter, who many believed is at the very end of his career.

Pacquiao set the tone with an opening round one punch knockdown and Thurman told the show while watching the replay highlights in real time,

“I was being very aggressive and I said, ‘you know what? I’m gonna take a step back, and relax for one moment’… As I’m moving backwards, he caught me….with the backward motion and the shot he landed, I had to go down….I got up. I smiled about it. I thought to myself, ‘here we are.'”

And “there Pacquiao was,” too. As the seven division World Champ continued to take the fight Thurman in the early rounds, and he bloodied his nose at the end of the fourth. And, later hurt Thurman with a left to the body early in the 10th round that sent him reeling and back-peddlingl for 30 seconds. while Manny stepped up the attack with combinations.

Thurman was in the second comeback fight after a near two-year layoff due to elbow surgery and a hand injury that cost him probably two or maybe more lucrative title fights in 2017 and 2018.

As for not being able to wear Pacquiao down and either put him away or at least, score enough to pull out the decision at the very end? Thurman said of losing the split decision Wednesday,

“I accepted that. I was humble at the end of the fight. I fought a champion to the best of my ability. We preformed”

While Thurman’s side has maintained they’d love to have a rematch, it’s unlikely that Pacquiao, who maybe only has a fight or two left in his tank, would choose to do that. This is, as opposed to a mega-showdown potentially, with IBF Champion, Errol Spence.

Spence will be fighting WBC Welterweight Champion Shawn Porter on pay-per-view in Los Angeles coming up next month. And, it’s believed the Premier Boxing Champions will have Spence, if victorious, take on Pacquiao probably around March or April of next year, again on Pay-Per-View.

For now, Thurman has to seek to rebuild his reputation by getting back in the ring and sporting an impressive victory in the near future.