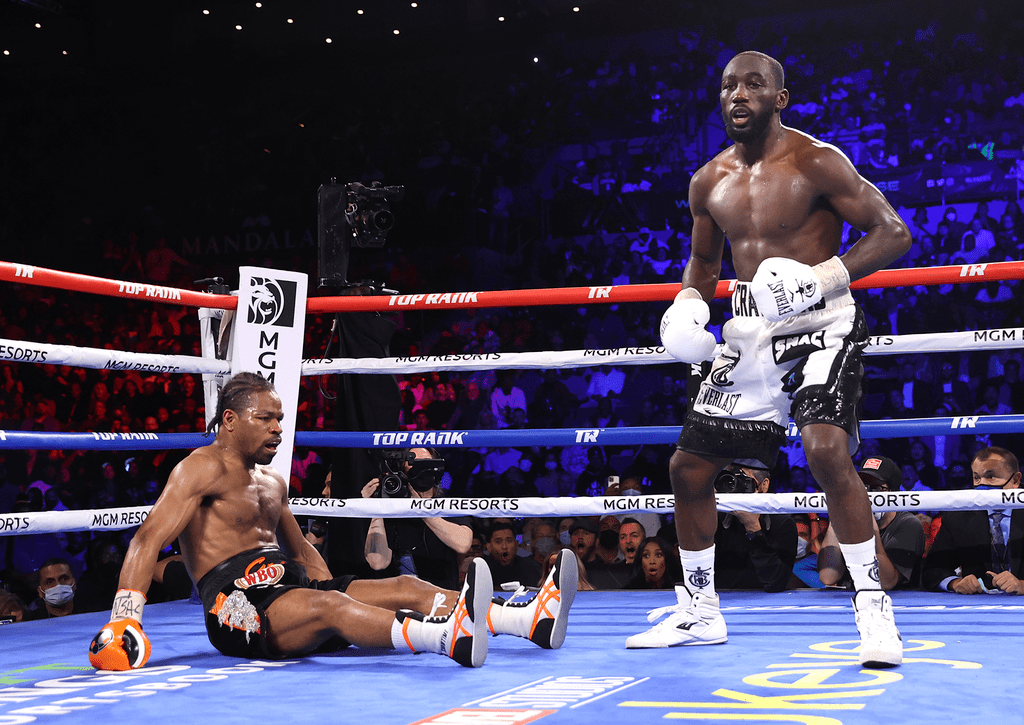 Terence Crawford and Shawn Porter “tore the house down” in a Welterweight classic that resulted with Crawford retaining his WBO World Title by tenth round stoppage.

The official time of the stoppage was 1:21 of round ten as Crawford moves to 38-0.

This was slated to be the toughest test on paper for Crawford, and Porter was looking to become a three-time champion at welterweight.

The opening round was a feeling out round as both were trying to get each other’s timing down and, more often than not, leading to nothing more than missed punches and tie-ups. Porter was the aggressor, however, landing a modest six rounds to three in after the opening round based on the Compubox stat on the broadcast.

The action picked up in the second round in the fight as both had good exchanges. Crawford switched stances to southpaw against Porter and was able to land more shots with precision than in the first.  Once the third round started, this seemed to be the fight that got going, but a clash of heads happened and a cut formed on the eye of right Porter.  Replay from the pay-per-view broadcast confirmed this, and Porter’s corner began to work on the amount after the end of the third round.

Once the fourth round, Crawford was getting his timing down, but Porter was still in the pocket with and not slowing down.

While the action slowed down, it seemed to have an ebb and flow where the back and forth between the second and fifth rounds could go either way.

The sixth round is when that shifted in favor of Crawford as he opened up peppering shots from the outside. At this point, Porter’s right eye started to have more swelling, and the second clash of heads now opened up a cut on Crawford inside the brow of the right eye.

Once the eighth round started, Crawford was landing shots again from a distance, but Porter has taken all of this well.  It seemed to be a fight that showed that both evenly. That changed at the start of the tenth round as Crawford landed a well-timed left that sent Porter down. Porter beat the ten count of Ruiz but was still getting popped and was sent down again for the second time with a shot to the temple.

Porter got up for the 2nd time, but at this time, Porter’s trainer and dad, Kenny, decided to stop the fight. Shawn was visibly frustrated as he felt after the knockdown he could continue but was looking for his son’s safety.

“Like I said before, I can’t say nothing bad about him (Porter). He had to reach. He had to take chances to get in. I’m a little stronger than him. I used my angles. I pushed him back at times,” Crawford told ESPN in the ring post fight.

On whether he knew Porter was in trouble on the first knockdown in the 10th? Crawford added,

“I caught him with an uppercut when he came in. Then, with a good left. I knew he was hurt.”

All three judges had Crawford ahead going into the 10th round. Two of them by a point and Max De Luca curiously gave Crawford all four of the  6th-9th rounds for a three point lead. Crawford ended the judging speculation with what he did in the 10th.

The win is the most significant at Welterweight for Crawford in his fifth title defense. Post-fight he made clear again that he wants IBF/WBC champ, Errol Spence saying,

“Oh, he was at my fight? (sarcastically). I thought he didn’t come to my fights…..I said for a year, I want to fight Spence. He don’t want to fight me.”

Crawford improved to 38-0, 28 KOs with the win. Porter drops to 31-4-1 having lost his third significant world title fight in the division since 2016.