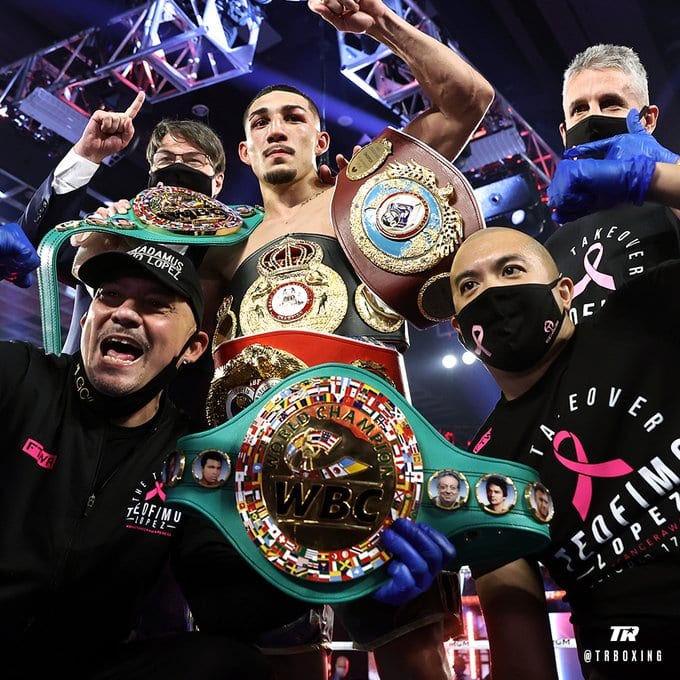 It looks like the matchup of Teofimo Lopez taking on George Kambosos Jr. is getting a new party date.

Keith Idec of Boxingscene reported Wednesday night that Triller Fight Club is seriously considering moving its pay-per-view event that’ll feature Teofimo Lopez and George Kambosos Jr. off of its scheduled date of June 5. The assumption and reason for that are because Floyd Mayweather takes on Logan Paul at Hard Rock Stadium in Miami the following night of June 6 and they didn’t want to interfere with any competition in town the weekend the fight. Triller’s fight slated on the 5th was to take place at LoanDepot Stadium, home of the Miami Marlins.

Idec, in his report, stated that there was a possibility of the fight moving back to June 19.

However, this won’t give him as of this writing a competing pay-per-view that weekend in the United States. Ironically, it would place him against another exhibition fight in Julio Cesar Chavez Sr. vs. Hector Camacho Jr. instead if this move is made.

Add the Chavez Sr. and Camacho card, “The Monster” Naoya Inoue back in Las Vegas, Jaime Munguia in action in El Paso, Texas, and WBC middleweight champion Jermall Charlo and the 19th makes for a very crowded weekend of boxing across the nation.

If you hate boxing, June 19 might as well be doomsday for you.

Another swerve that the move also does it places the card a week ahead of the 2nd Showtime pay-per-view that month in Gervonta Davis taking on Mario Barrios on June 26th in Atlanta. So, on the outside looking in, this moves to the 19th is more of an intelligent business move than an “I didn’t want to pack South Beach with Floyd” kinda deal.

Despite it being an exhibition, Floyd Mayweather will consume and take over the weekend, as he reclaims his spot as the top draw in boxing.

Triller is looking to make as much back on this Lopez-Kambosos fight that they overbid on to make and the move to any other weekend Floyd isn’t in the ring is the only way for that to be feasible.