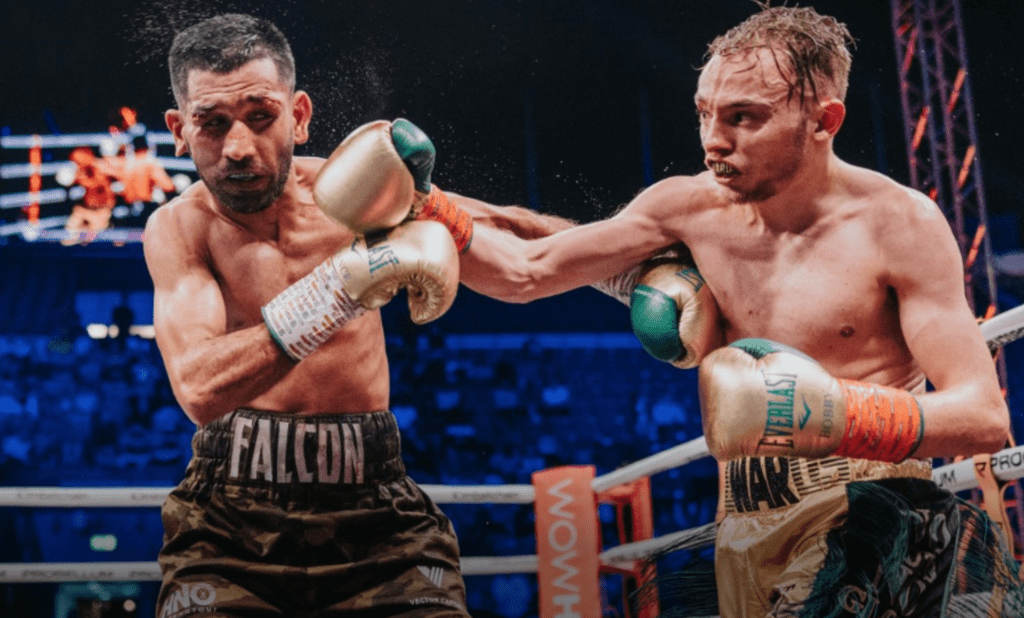 Saturday night in the U.A.E, England’s Sunny Edwards re-asserted that he’s one of the top fighters in the world at Flyweight and that he wants more than that.

The slick boxing Brit, who doesn’t have a big punch, but has plenty style, scored a unanimous 12 round decision of Pakistan’s Muhammad Waseem by scores of 116-110 and 115-111 x 2. That keeps his IBF World Flyweight Title and capped off the Saturday night Probellum Entertainment show in Dubai,

The 26 year old Edwards flashed his hand speed frequently and scored with his right hand throughout the bout. Wasem tried to rough house the British title holder and it eventually cost him on the scorecards. Waseem was docked points in the in the sixth round for excessive holding and wrestling. And, then, another point in the seventh for repeatedly leading with his head.

At that point, Edwards, now, 18-0, 4 KOs, had banked several rounds and it was obvious that Waseem, now 12-2, would need something dramatic to happen. Alas, even though the 34 year old challenger did pressure Edwards and trapped him on the ropes with combos a couple of times. However, he could not deliver.

Edwards out boxed and out-scored him in the championship rounds to seal the decision win.

Earlier in the co-feature bout, former WBA Jr. Lightweight champ Regis Prograis won his third straight bout after losing his title, when he scored a TKO over Tyrone McKenna. Prograis, now 27-1, 23 KOs, dropped McKenna with an overhand left in the first :10 of the second round and continued to score out of the southpaw stance.

He eventually opened a cut over the corner of the Irishman’s right eye, and the bleeding was so bad that the ringside doctor stopped the bout  early on in the sixth round.

The Louisiana native Prograis, has bounced around from promotion to promotion since leaving Lou DiBella Entertainment in 2019. This includes a single fight with Premier Boxing Champions in 2020 and also Triller’s “Fight Club” series in the Spring of 2021. He’s obviously looking to get back into the Jr. Welterweight title picture and potentially, get a rematch with Undisputed 140 lb. champ, Josh Taylor.

Those two fought at a hotly contested battle in the World Boxing Super Series tournament finale’ in London October of 2019. That’s when Taylor nosed out the previously undefeated Prograis on a 12 round decision. Taylor recently defended the Undisputed title in a controversial 12 round decision win over Jack Catterall late last month. It’s believed that he will vacate the four 140 lb. world titles and move up to Welterweight.