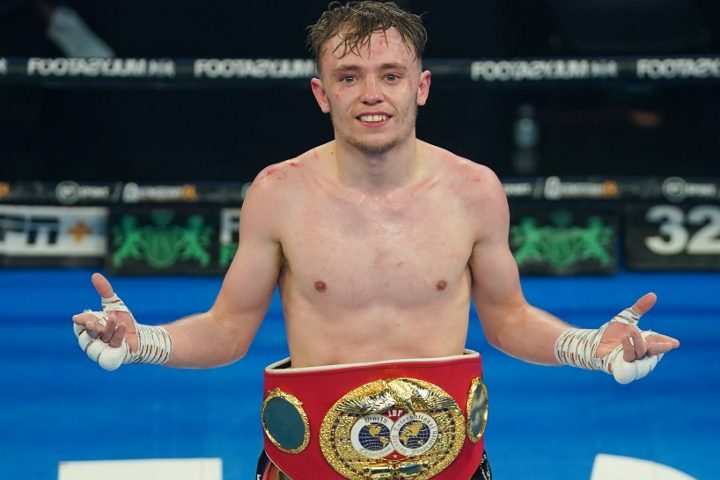 The main event that aired on their website and in the United States on cable channel Axs.tv was the first title defense for Edwards since capturing it from Moruti Mthalane in April in London. Originally the co-man event, the card has some reshuffling and this bout instead closed out the Coca-Cola Arena instead.

Spirited but foul-filled contest fight from the opening bell as both looked to be looking to headhunt and counter early on. That slowed down and became a boxing match as the contest grew on. Edwards was going to stay on the outside and use his footwork to outbox Mama. Mama’s plan was to dictate the pace and use his left to try to get inside Edwards. What took place was by the middle of the fight as expected, Edwards would get into a rhythm that Mama had trouble countering.

Mama in the tenth round was knocked down with a shot by Edwards that he felt was behind the back of the head. Either way, he beat the referee’s ten count and the fight pressed on.

Mama as the fight grew on was still was trying to find his range to land on Edwards but wasn’t having much luck or success in those prospects as he couldn’t keep up with him. Was apparent that despite trying, Mama seemed to just be one step behind Edwards in this initial title shot.

With the easy win for Edwards, we’ll see what comes up next but Ricardo Sandoval is the name on everyone’s list coming up the ranks but for tonight Edwards made this look easy.

As for the rest of the Probellum show of note, you missed a 39-year-old Donte Nietes fight to a competitive draw despite the ring announcer screwing up the contest as the twelve-round fight was stopped after ten rounds. Bakhodir Jalolov stopped Julio Cesar Calimeno in 46 seconds in a fight that shouldn’t have happened, let alone air in front of an audience and Jono Carroll won in two rounds. To be honest, you missed nothing of note on this card except a Michael Buffer sighting leading into the main event.